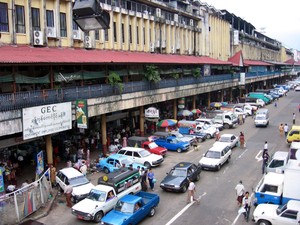 In 2010, the military regime in Myanmar surprised the world by lifting the house arrest of politician Aung San Suu Kyi after two decades. The government soon released political prisoners and dissidents, some of whom, such as the comedian, writer, and activist Zarganar, still had half a century remaining on their sentences. Four years after the release of Aung San Suu Kyi, what has changed?

Walking the streets of Yangon, you can find bookshops selling novels in English and Burmese, a variety of newspapers, and glossy magazines. Food vendors sell their treats in front of police stations, and officers duck out for a quick snack, laughing as they do so. A muezzins issues his call for prayers in an ornate, beautifully decorated mosque a hundred yards away from an ancient Buddhist pagoda. Aung San Suu Kyi is busy working in parliament and her National Labor and Democracy party headquarters seems, at first glance at least, unmonitored. And activists joke loudly in tea shops and restaurants, when a decade ago they would have spoken in hushed voices and scanned everyone who came into the room to make sure they were not being surveiled by a government informer.

Instead of remaining quiet after spending years in prison, a courageous group of writers emerged from jail and began writing and publishing with renewed vigor. One former prisoner (who will remain unnamed) ran a clandestine publishing house inside jail, publishing four hand-written copies daily that were circulated amongst the inmates. Not content to join the often pro-governent journalists unions, he banded together with other writers to form the new PEN Myanmar, which will celebrate the opening of its new office on May 30.

Yet, in many ways Myanmar’s relatively open society could close at a moment’s notice. Writers are able to write and to criticize the government not because the laws have been changed, but because they are frequently not enforced. Many civil society organizations in the country are unable to register because the old registration laws are too complex, the bureaucratic red tape too thick, and pending legislation intended to streamline the process remains tied up in parliament.

This lack of certainty also applies to the economic sphere. While technology and investment firms have sent scouts to probe the country for opportunities, intellectual property laws date back to the colonial era, and government promises to reform laws to meet World Trade Organization requirements have not yet been fulfilled. The sight of pirated DVDs and copies of Adobe Photoshop selling for less than a dollar each probably does not encourage ICT firms either—though at least there is a demand for these products.

Internet speeds remain slow, so slow that websites designed to measure download and upload speeds do not even load, but if you rise early in the morning you can snatch uncensored headlines from around the globe, including from The New York Times and the BBC. In the afternoon, internet users switch to mobile phones, where they are charged roughly two kyat per minute of use on a GSM phone or four kyat on a CDMA phone (about 960 kyat equals one dollar). The hope is that the new mobile contracts awarded to Telenor and Oredoo, a Norwegian and Qatari telecom company, respectively, will lead to faster connectivity. But a 2013 Index on Censorship report noted that the lack of internet exchange points suggests that much of the information traveling over the network has the potential to be filtered and monitored by government.

According to a local journalist, 100 political prisoners remain behind bars and five journalists are currently in prison. (We are seeking more detailed information at the time of this writing.) The religious harmony perceptible in Yangon does not extend to the rest of the country, and Kachin, Rakhine, and Kayin states in particular are mired in devastating armed conflicts between Buddhists and Muslims.

The realities of this painful transition make freedom of expression that much more important. The prevalence of hate speech towards Muslims (roughly four percent of the country) and minority groups (there are 100 ethnic groups) led PEN American Center’s 2010 PEN/Barbara Goldsmith Freedom to Write Award winner, blogger, writer, and PEN Myanmar Board Member Nay Phone Latt to launch his Flowers Campaign, which seeks to track hate speech and then counter it with positive, tolerant speech. We’ll be featuring more stories about Nay Phone Latt and other brave writers in the weeks to come.