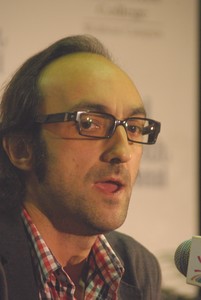 Zachary Ludington is the recipient of a 2014 PEN/Heim Translation Fund Grant for Pixel Flesh, by Agustín Fernández Mallo. Read an excerpt from the translation here.

I first encountered Agustín Fernández Mallo’s writing in the opening installment of his narrative trilogy, the Proyecto Nocilla. The book was Nocilla Dream, a novel with no center, a book like a series of cinematic flashes that set my mind into all kinds of wobbly and crazy-vectored motion. Part of the appeal of the book was that it was kaleidoscopic and expansive, so I really wondered what else Fernández Mallo might have to say and how else he might say it. The next book of his I picked up was Carne de Píxel, a slim volume of poems, mostly set in plain rectangles of justified prose. In fact, many of the pieces in Carne de Píxel read like the “chapters” of the Nocilla novels. They are starkly narrated, almost affectless prose vignettes, with syntax that nonetheless puts them squarely in the realm of poetry. The collection is crisscrossed by references to cosmology, literature, and pop culture, including things like the rock band The Smiths, Alfred Hitchcock, and Ridley Scott’s Bladerunner. What I came to find in this book which I had not yet seen in Nocilla Dream was a kaleidoscopic vision which discovered, by the end of the collection, a crisp and focused geometry. It’s a surprising book, and one whose internal tensions support the overall structure amazingly well.

After reading it, I basically thought, “Wow, I wish I had written that.” My next thought was, “I will.” The only way to follow through, naturally, was to write it in English, since it already existed in Spanish. This is the first work of Agustín Fernández Mallo to be translated into English, but some of his novels have already appeared in other languages. I think that, at this point, Fernández Mallo simply needs to be heard in English because he has become so important in Spain, all the while representing a great interest in and awareness of globalization. While he is not interested in polemics, his writing has been the catalyst for all kinds of consternation as well as celebration in Spain. He’s not interested in particularly “local” themes, and so I think his work lends itself to being heard outside the Spanish-speaking world. He’s already an important international author, travelling often to Latin America for book presentations and festivals, but he cannot yet be read in English. I want to help change that. Thus, this translation of Pixel Flesh. I’ll call it pixelation nº n.