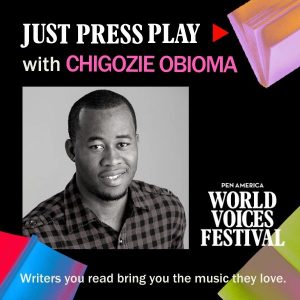 This week, Chigozie Obioma, author of The Fishermen and An Orchestra of Minorities, both finalists for the Booker Prize, shares a playlist of songs that he writes to, is inspired by his travels, and offers moments of reflection:

“This playlist consists of songs that I listen to again and again, songs that inspire both creativity and reflection. The tune of Lady Jaydee’s ‘Siku Hazigandi,’ for instance, helped me while writing The Fishermen. It is a song that characterizes the dominant tone of the novel and even, to some extent, my writing style. It begins quietly, softly, with only a murmur. Then, when it seems like an understanding has been reached, the instrumentals begin, blossom into words, and crescendo afterwards. There is something calming and moving about the movement of tone and the constant register of the brass drum. Same thing can be said of the entries by Asa, Dido, Mazzy Star, and Emre Aydın’s.

“The list also reflects who I have come to become—a person who has lived in many places and speaks many languages, including Igbo, Yoruba, and Turkish. Even so, I don’t understand the Swahili of ‘Siku Hazingandi’ nor the Somali of ‘Timbuktu Fasso.’ As varied as my life has been, so also has become my outlook to life and my philosophies of life. There is something about Kid Cudi’s ‘Pursuit of Happiness’ that inspires me to relax and move ahead when the going is tough, and I can say the same for ‘He Lives in You.’ ‘Eye Adaba’ feeds me with the beauty of culture, of the beliefs of the Yoruba people and our worldview while relaxing me. Diawarra’s entry stands out of the lot because it is a lamentation for her beautiful land of Timbuktu, but this could be for anywhere, but most definitely for my own country, Nigeria, a land so very blessed yet very deeply troubled.”

Check out his playlist on Spotify and YouTube today, and order An Orchestra of Minorities on Bookshop or Amazon.

Chigozie Obioma was born in Akure, Nigeria. His two novels, The Fishermen (2015) and An Orchestra of Minorities (2019) were both finalists for the Booker Prize. His novels have been translated into more than 30 languages and won the inaugural FT/Oppenheimer Award for Fiction, an NAACP Image Award, the LA Times Art Seidenbaum Award, and a Nebraska Book Award. His work has appeared in Virginia Quarterly Review, The Guardian, and Esquire. He is a professor of creative writing and literature at the University of Nebraska-Lincoln.

Join us next week for a playlist from Abdellah Taïa, the first openly gay Arab writer and whose novel, A Country for Dying, translated into English by Emma Ramadan, will be published in September.