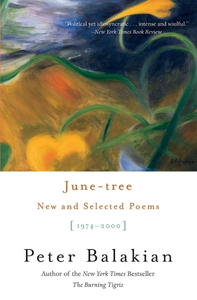 This piece was submitted by Peter Balakian as part of the 2015 PEN World Voices Online Anthology.

in white skin   through the gullies
to the blonde and furry wheat.

I dug toward the damp smell   of a water channel—

Palmettos sawed my palms.
A rising moon in the moss-grown   stone mirrored the light

where winged griffins,  those talismans of blood
flew into the arms of Christ.

where a scimitar cut the horizon.

and the ringing bells   slid into the scree.

Down there   I felt my name disappear.

The mountain was close.
Far. Then closer.
Rivulets of light ran across it.

Lakes were white circles,
then canyons,
then empty eyes.

The sky was a field of burning stones.
It was neither day nor night.
It was jasmine, and fires went out

over my head. The closer I got,
the farther it was.
Rivers pooled like green wax,

and the orchards and vineyards
on its flanks flared
like the wings of a scarlet tanager.

The trees glared like shepherds’ crooks
in the brass light; crows roosted on them,
and the mountain rose into the sky,

until it was a cloud
shimmering in black air.

After the Survivors Are Gone

I tried to imagine the Vilna ghetto,
to see a persimmon tree after the flash at Nagasaki.
Because my own tree had been hacked,
I tried to kiss the lips of Armenia.

At the table and the altar
we said some words written ages ago.
Have we settled for just the wine and bread,
for candles lit and snuffed?

Let us remember how the law has failed us.
Let us remember the child naked,
waiting to be shot on a bright day
with tulips blooming around the ditch.

We shall not forget the earth,
the artifact, the particular song,
the dirt of an idiom—
things that stick in the ear.

Between arid houses and crooked streets
a shadow could be your wife or a corpse
and a mule’s hooves sounded like Stalin’s
fat fingers drumming a table.

In the Caucasus eagles and hawks
hung in the blue’s basilica.
A swallow flew off a socle
into the wing of an echo—

history’s caw and chirp and bird shit
on the tombs in the high grass.
On hairy serrated stems
poppies flagged like tongues.

From a cloud of broom a red bee stumbled
to your fish-globe brain.
A casket of light kissed the eyebrows of a tree.

When the evening air settled
on the creatures of the mountain
the sun was the Virgin’s head.

Here, where the bush grew with fresh blood
and ancient thorns, you picked the rose
without scissors. Became an omen.

A flame like a leaf eaten
in the sun followed you—
a white light rose higher
than the mountain,
and singed the corner of your eye
when you turned to find
the screaming trees
dissolving to the plain.

Even when the sun dropped,
the ground was heat and bayonets,
and in the Turkish wind
the throats of boys
kept ringing in your ears.

Your breath like horizon
settled into black.
You stuttered every mile
to your daughters’
shorter steps.

The air, almost gone,
filled inside your dress.

Shirts hang in the glass showcase
behind the gold French Cleaners,

when I open the door,
naphthalene rises
into the no-legs.

Delphiniums are blue like
the decanters of cologne from Paris.
That’s my brother’s house.

At the butcher’s those are cow’s eyes
with the visionary gleam of things
in the dead sand.

I’m the star of a Jew
rising from the beery foam
of Chaplin’s moustache.

It was a dirt road
like the head of an elk
or these hanging ribs.

Figs at Delaney’s all
the way from Smyrna
like shit in cellophane.

On the road. We were going there.
and then Hawaii turned into white light
on the screen of the Philco.

Kamikaze metal.
A runway of gin and broken glass.
Naphthalene of the Red Cross nurses.

Yes, yes, the child’s mine.
No Armenians left?

Jimmy Stewart you bastard
I’m here with some shopping bags.