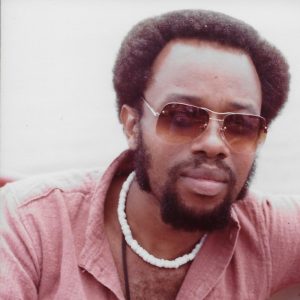 Selected Remembrances:
“I had the good fortune to work with Ron Hutson as a student intern at @BostonGlobe many years ago. He took the time to teach from that night editor’s chair. The experience left me a better writer and a better person.”
—Brenda Buchanan, former intern, The Boston Globe [Twitter]

“He was probably the happiest beat reporter—smiling, easy-going, excited. But I think that also belied a certain intensity that he brought to the craft and to those around him.”
—Carmen Fields, former reporter and editor, The Boston Globe [The Boston Globe]

“What set Ron apart was that he knew the streets. I got to do stories because they didn’t have anyone to send into the [housing] projects. There were only a handful of Black reporters back then. Ron was one of the editors who knew the community.”
—Michael Frisby, former White House correspondent for The Boston Globe and The Wall Street Journal [The Boston Globe]

“Some people touch your life & help launch you. Ron offered me an internship when no one else would. Been paying it forward ever since.”
—Manny García, Senior Editor, ProPublica-The Texas Tribune Initiative [Twitter]

“Ron Hutson was fierce & unique of all the reporting of the  days of the 1974 court-ordered school desegregation.  He was my generation and made us proud.”
—Janice Graham, Host, “Our Common Ground” [Twitter]

“He was great in terms of helping me focus and understanding what readers wanted to know and how to put a news story together, and how to be accurate. He was demanding, for sure, on the job. And outside of work, he was a fun person to be with.”
—Diego Ribadeneira, editor at The New York Times and former intern at The Boston Globe [The Boston Globe]

“Here’s a guy on the other end of the phone and he was just so up, up and funny that he just lifted every cloud that was hanging over you or any other reporter. It vanished when you were talking with Ron Hutson.”
—Walter V. Robinson, former Spotlight editor, The Boston Globe [The Boston Globe]

“His standards for the Globe were high, just as his affection for the place was boundless. . . He was recalled, rightly, as a talented writer, a gifted editor, and a great colleague. He was certainly all of those things. But he was something else, a great mentor, especially important to Black and Latino reporters starting out.

“Hutson helped hire us, helped us find our footing, and never stopped cheering for us. In the office and often outside of it too, he was always there.”
—Adrian Walker, Columnist, The Boston Globe [The Boston Globe]

“The Claire Saltonstall was advertised as a 135-mile trip through ‘low traffic volume’ roads from the Charles River in Boston through scenic countryside to Provincetown.

“Hell of a challenge, I thought. Some people run 26-mile marathons. Some swim the Florida straits. Others jump out of airplanes from thousands of feet in the sky. Certainly I could ride my ten-speed racer to Provincetown, my ego decided.”

“Hyde Park High School, closed for three days because of racial tension among students, will remain closed today to allow administrators, faculty, students, parents and police to prepare for reopening on April 24 after the spring vacation.”

“A section of Columbia road near Franklin Park has become known as ‘The Badlands’ of Dorchester.

“It is a nine-block stretch of inner city highway that the commuters from places like Dedham, West Roxbury, Hyde Park and Brookline use mornings to get to their jobs downtown, and evenings to escape the city through Franklin Park, the place they used to go for picnics and to the zoo before the area ‘changed.’”

“The overwhelming majority of Boston’s registered voters who are black support district elections to the City Council and School Committee because that is the only way black concerns will be represented, according to a poll released today.”

“The Medford School Committee voted last night to allow biracial groups of parents to patrol the high school’s hallways when it reopens today.

“Medford High School was closed yesterday after racial disturbances broke out inside the school for the second straight day.”