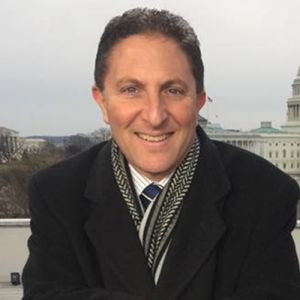 Selected Remembrances:
“Eric was a driving force in helping to launch Fox Business in 2007. Most recently, he served as our network’s senior head booker and story editor. Eric was one of the most prominent guest bookers for Fox News and Fox Business, and really, for the entire industry. He booked the many guests that we’ve seen on both Fox News and Fox Business over the years, and our heartfelt condolences go out to Eric’s entire family.”
—David Asman, News Anchor, Fox Business Network and Fox News Channel [Fox Business]

“Eric was a talented producer, story editor, and senior booker. I had the privilege of traveling with Eric during some of the most exciting times in our nation’s history, and we had fun. . . He loved to produce segments from the setup to the end product. He booked it, and he produced it. . . Eric was a personal friend of many of us here at Fox.”
—Maria Bartiromo, Anchor, Mornings with Maria, Sunday Morning Futures, and Maria Bartiromo’s Wall Street [Fox Business]

“To say Eric was a force of nature was an understatement. Everyone knows he was tenacious pursuing guests. What they might not know is he wouldn’t let anything get in the way of making sure they talked to Fox first. Even if they were in prison!. . . Eric managed to land former Tyco boss Dennis Kozlowski, not after he got out of jail, but while he was still doing time in jail. Yet there we were in an upstate New York penitentiary talking to the man whose lavish spending had made him the face of executive excess, but at that moment, just another white-collar criminal serving time.”
—Neil Cavuto, Senior Vice President, Anchor, and Managing Editor of Business News, Fox News Channel and Fox Business Network [Fox Business]

“His style was hilarious and unbiased. . . Whether he was speaking with presidents, CEOs, boxing legends, or B-list celebrities, he would give them the same tough love ‘this-is-TV’ talk and they all responded to it.”
—Ralph Giordano, Vice President of News Coverage, Fox Business Network [Fox Business]

“Eric was such a special person, so passionate about his work, about life in general. He was always so upbeat, always smiling. Eric loved connecting people, whereby so many new friendships were developed with him. He will be sorely missed. I cherished all the great times we had, whether smoking cigars, going to games, or fishing in Montauk. . . RIP my dear buddy.”
—Mitch Modell, CEO and President, Modell’s Sporting Goods [Fox Business]

“If you’ve ever booked before, you probably know Eric.

“Eric was a great guy. Very outgoing and gracious with advice.

“Such a devastating loss for his family, loved ones, and the entire Fox team.”
—Erin Perrine, Communications Director, U.S. Senator Ted Cruz [Twitter]

“Eric was an immensely gifted and aggressive booker and was renown for booking the innumerable ‘gets’ we’ve seen on both FNC and FBN over the years. He was also always willing to lend a hand to help a colleague, mentor junior staffers or troubleshoot an issue — countless bookers throughout the industry learned the ropes and the tools of the trade from Eric at one point or another in their careers. . . His excitement, positivity and energetic team spirit were one of a kind and will be greatly missed.”
—Fox News CEO Suzanne Scott, Fox News president Jay Wallace, and Fox Business Network president Lauren Petterson [Newsday]

“Eric was like a brother to me. He was always fun whether it was making sure my Fox hits were on mark, to coming to my live shows and just having the best time.”
—Joe Piscopo, comedian and former cast member of Saturday Night Live [Fox Business]

“Eric will never be forgotten. He was a gem and a true friend who was always there to lift us up. Filled with boundless energy, Eric made us laugh, never stopped, and was always creatively thinking of the next big and bold ideas. He was loyal and selfless who lived his life giving others a chance to shine.”
—Mercedes Schlapp, former director of strategic communications, The White House [Fox Business]

“His goal was just to be the best at what he did. The best word for my brother is ‘humble.’ He mingled with celebrities, the rich and famous, the Trumps, everybody. But when he went to the White House instead of saying he’d been at the White House with the president he was like, ‘Yeah, I had to work this weekend.’ That was it. ‘I had to work.’”
—Dean Spinato, brother of Eric Spinato [Newsday]