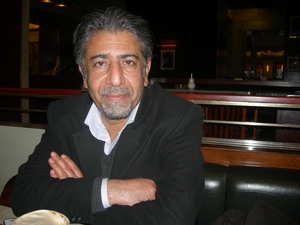 On September 27, 2014, Jordanian-British Poet Amjad Nasser was denied permission to board a plane bound for New York, where he was to inaugurate the new Gallatin Global Writers Series at New York University. Like other writers who face ideological exclusion from the U.S.—including Ilija Trojanow almost exactly one year earlier—Nasser was given no reason for this denial. This policy of silence must change to ensure that homeland security is not abused a cover to bar those who express ideas that the American government disfavors. PEN sent the following letter, in partnership wit Split This Rock, protesting Nasser’s exclusion to the Department of Homeland Security on Friday, October 3.

We are writing to express our profound concern regarding celebrated British-Jordanian poet and novelist Amjad Nasser’s denial of entry to the United States on Saturday, September 27, 2014.

Invited to give the inaugural address in the Gallatin Global Writers Series at New York University, Mr. Nasser was detained at Heathrow Airport in London and prevented from boarding his flight to New York. The Department of Homeland Security representative who spoke with him for two hours on the phone before refusing him the right to travel to the United States declined to provide any reason for the denial.

Our organizations represent thousands of poets, writers, and others passionately committed to the free exchange of ideas. Mr. Nasser is one of the major poets of the Arab world. He has worked as a journalist in Beirut and Cyprus. Since 1987 he has lived in London, where he is managing editor and cultural editor of the independent daily newspaper, Al-Quds Al-Arabi. He has published nine volumes of poetry, four travel memoirs, and a novel. His works have been translated into ten languages. While some may find some of his views or those of his newspaper controversial, we are aware of nothing in his background that would be grounds for his exclusion from the United States.

At this time of conflict and crisis, it is important to keep open the channels of dialogue and communication between the American people and our counterparts all over the world. If Mr. Nasser has been determined to constitute a threat to the security of the United States, this information should be presented to him, along with an opportunity for him to respond to the evidence. Absent any such communication, serious questions arise about whether Mr. Nasser has been denied entry to the U.S. on the basis of protected acts of expression through his writings or speeches.

We ask you to institute a review of this case and to clearly set out the criteria that the Department of Homeland Security uses to make such decisions, as well as to either provide Mr. Nasser with the reasons for his denial or, alternatively, grant him the entry to which he is entitled.