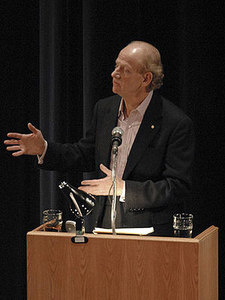 When members of PEN International say that we represent literature and freedom of expression, and that you can not separate one from the other, it is a simple statement of fact. This is our 90th year. We are, and have always been, the only truly international literary organization. We invented the idea and the implementation of freedom of expression campaigns.

Sometimes, the obvious has to be reiterated. There are some governments, some people in power—those that George Konrad, one of our former presidents, calls “professionals of power”—who say: “Ah … they’re only writers, only words.” And it is true that we do not have tanks or banks or the capacity to bear a huge deficit or support a large bureaucracy. But if we are only writers, why is it that 850 of our colleagues are in jail around the world? Why is it that writers are still killed with terrifying regularity? We have that great power which is language and imagination—through poems and plays and novels and essays—a power that sets free the spirit of readers. It is with the words of imagination that people work.

Yesterday, I was asked—quite rightly—what difference does it make that writers from 89 PEN centres are gathered in Belgrade. It is the right question.

Today, the leaders of 10 Balkan PEN centres sat together on a stage and created the Balkans PEN International Network. The founding members are Bosnian PEN, Bulgarian, Croatian, Kosovar, Macedonian, Montenegrin, Romanian, Serbian, Slovenian and Turkish. This is an historic event. It is a message to the world.

Second, the gathering of hundreds of writers from around the world matters because it is a force for imagination and transparency. Our charter is clear. We believe in unlimited freedom of expression. But we also believe that no matter how controversial or difficult our words are, the ultimate purpose is to bring people together. The great Serbian Canadian writer, David Albahari, has rightly written that “knowledge can never catch up with the power of ignorance.” This is true. But the imagination can catch up. Imagination can leap over ignorance. Let me give you an example: When a virtually unknown radio journalist is killed in Mexico—the most dangerous place in the world today to be a writer—they leave, in Ivo Andrić’s words, “a memory clearer and more lasting than that of so many other more important victims.”

This year our former President, Mario Vargas Llosa, won the Nobel Prize for literature. And the founding president of our Independent Chinese PEN Centre, Liu Xiaobo, won the Nobel Peace Prize. Two men of courage. Two masters of the imagination. One of whom remains unjustly in prison. And several of our centres were central to what is called the Arab Spring. In some cases they are now a key part of the rebuilding civil society in their country.

The core of what we do is this: imagination and the transparency that imagination creates, and the acceptance of complexity—all of this is above politics and below politics. It’s everything except politics. In a society without this democracy of the mind it becomes possible for lies to install themselves, as if they were language. And as Danilo Kiš put it, “When everyone lies, no one lies.”

We are in the business of open memories, memories that do not oppose people, one against the other. We represent an open idea of how people can live together.

This is the 77th Congress. The 1933 Congress in Dubrovnik was organized by this Centre. It was a complex, but historic moment for PEN. We were faced by the rising forces of authoritarianism, even within our own centres. The divisions of European society had become the divisions of PEN. Our President, a great writer, H. G. Wells, but also an anti-Semite with confused public views, found himself caught in an atmosphere of impossible divisions. But, complex thought it was, Wells and the delegates found their way through in order to stand with the imagination and transparency and therefore against authoritarianism.

In 1933 we found an ethical shape—long before governments took a stand. And at every PEN Congress since 1933, those ethical standards stand before us as the measure of what we do. I like to think that in leading with wisdom in Dubrovnik, Wells found his own way to a personal understanding of PEN’s ethics. It was a noble moment for him and for PEN.

There are always those who believe that writers can be dragged away from their independence in the public place. And I believe that the next few years will be difficult. There are many strong and negative forces at work. But the meaning of PEN is simple. Our central ethical force is the independence of our imagination and our creativity. And we know what this means because for 90 years we have defended that independence.