Introducing the Literature of Madagascar: On Translating Naivo 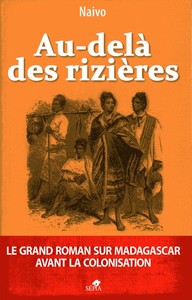 Allison M. Charette is the recipient of a 2015 PEN/Heim Translation Fund Grant for her translation of Beyond the Rice Fields by Malagasy writer Naivo. Read an excerpt of the translation here.

No novels from Madagascar have ever been translated into English.

I’ll just let that sink in for a moment.

This might be understandable, although still problematic, if all works from this African nation were written in the island’s national tongue of Malagasy. Yet the reality is that most authors from Madagascar have been educated in a French system. Thus they write in the French language to improve their chances of getting their work read by a wider audience than merely their own circle of friends. It’s utterly incomprehensible that the only representations that exist in English of this island of 22 million people are a bilingual French–English anthology released by a university press in the early 2000s that is all but out of print, and a handful of poetry collections of two of Madagascar’s classical late nineteenth- and early twentieth-century poets. So, despite wide academic interest in post-colonial Francophone literature, English speakers currently have almost no exposure to an entire strange, beautiful, and distinct segment of African culture.

Once I discovered this, I spent a few months trying to translate stories from Malagasy authors that I’d found through Interlibrary Loan (God bless it). Then, in August 2014, I got the chance to go to Madagascar to find more books, meet some authors, and do as much research as possible. I found Beyond the Rice Fields featured on a shelf in one of the few non-religious bookstores in the capital city of Antananarivo. The booksellers couldn’t stop praising it.

“It’s like an old hainteny poem in novel form.”

“The author’s the son of one of the mothers of contemporary Malagasy fiction.”

“He’s writing about slavery. No one ever thought they could get away with that before.”

Beyond the Rice Fields is a work of historical fiction that uses dual narrators to depict the era when Madagascar was ruled by a monarchy and was first being settled by Europeans. One of the narrators—and, indeed, the more well-educated and well-traveled one—is a slave. It’s a rather shocking new perspective that’s riding the wave of the literary revolution begun in Madagascar in the 1980s, when traditional sentimentality started dying out in favor of authors taking a harsh, stark look at how life and history really are. Naivo’s book is understandably rocking the boat in Madagascar, but readers are loving it. And although originally penned in French, this book showcases the great Malagasy tradition of circular storytelling very effectively, using a few choice repetitions of phrases to great impact.

This excerpt is taken from just over halfway through the book and is narrated by a woman named Fara, who used to own the slave narrator. Fara lives in her childhood village in the countryside, where most people work as rice farmers or zebu herders. At the start of the chapter, Queen Ranavalona I of Madagascar issues a proclamation that’s meant to set off a witch-hunt. The queen acts out of both political unrest and religious intolerance, but as the proclamation spreads throughout the country, the selection of victims becomes even more warped.

Naivo’s novel is of great significance to its island homeland, and its translation would be a wonderful first bridge from Madagascar to the English-speaking world. The novel examines parts of Malagasy culture that are rarely subjects of open discussion, and it uses techniques that are unique to Malagasy storytelling traditions, while still allowing outsiders to understand and appreciate the work. The book is relevant and informative to both Malagasies and people all around the world.

Allison M. Charette translates from the French and founded the Emerging Literary Translators’ Network in America (ELTNA.org). She is on the board of the American Literary Translators Association and has published two book-length translations, in addition to short fiction in InTranslation, SAND Journal, and others. Currently, Allison is collaborating with French-speaking authors from Madagascar to introduce the Anglophone world to Malagasy literature in translation. Find her online at charettetranslations.com.

Naivoharisoa Patrick Ramamonjisoa, who goes by the pen name Naivo, has worked as a journalist in his home country of Madagascar and as a professor in Paris, and now works for the press in Canada. Beyond the Rice Fields is his first novel, published in March 2012 by Éditions Sépia. He is also the author of numerous (as yet untranslated) short stories, including “Dahalo,” which received the RFI/ACCT prize in 1996, and “Iarivomandroso,” which was adapted for a theatrical production in Antananarivo, Madagascar. Naivo is working on his second novel, as well as a short story collection.

Beyond the Rice Fields will be published by Restless Books in Fall 2017.