Independence Day: Give Thanks, Speak Freely, and Fight Back 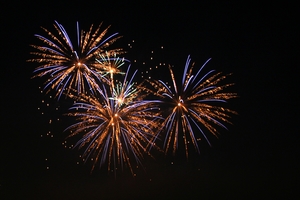 Katy Glenn Bass is the Deputy Director of Free Expression Programs at PEN. A lawyer who spent much of the past few years supervising comparative constitutional law projects, Katy reflects on the U.S. Constitution and its commitment to free expression—and the programs that threaten it—for Independence Day. Originally written for July 4, 2014, this piece remains relevant a year later: While Congress has made a modest first step towards reforming mass surveillance, there is still much to be done to rein in these programs. In addition, the British government’s recent admission that it spied on Amnesty International–a human rights organization that, like PEN, is engaged in entirely lawful work that depends upon the ability to communicate confidentially with activists and dissidents around the world–shows that these programs are being abused, making the need for reform ever more urgent.

On July 4, when I reflect on the country that raised me and the many things I love about it, I remember studying the First Amendment in the legendary Professor Laurence Tribe’s Constitutional Law course. It was a semester-long adventure into the United States’ tradition of protecting freedom of speech, the press, assembly, and belief, and it left me with a deep and abiding pride in my country’s respect for free expression and determination to defend it.

One of the many Supreme Court opinions I read for that course has remained with me in the ensuing years:  Justice Louis Brandeis’ famous concurrence in Whitney v. California. I return to the text often, so much that it has become a kind of companion. I love it both for the ideas it presents, and the beauty of its language—Brandeis could write. This is as close to poetry as lawyers get:

Those who won our independence… believed that freedom to think as you will and to speak as you think are means indispensable to the discovery and spread of political truth; that, without free speech and assembly, discussion would be futile; that, with them, discussion affords ordinarily adequate protection against the dissemination of noxious doctrine; that the greatest menace to freedom is an inert people; that public discussion is a political duty, and that this should be a fundamental principle of the American government. They recognized the risks to which all human institutions are subject. But they knew that order cannot be secured merely through fear of punishment for its infraction; that it is hazardous to discourage thought, hope, and imagination; that fear breeds repression; that repression breeds hate; that hate menaces stable government; that the path of safety lies in the opportunity to discuss freely supposed grievances and proposed remedies, and that the fitting remedy for evil counsels is good ones.

That this country not only protects but exalts free expression, that we hold the fundamental conviction that the best way to combat evil is through dialogue, makes me as proud today as it did as a law student. And it is a delight to me to spend my days at PEN defending free expression, in particular by fighting against mass surveillance.

Why surveillance? I’m asked this sometimes. The connection between mass surveillance and the right to privacy is clear, while the damage that mass surveillance does to freedom of thought and expression is perhaps less apparent. PEN surveyed its U.S. members in October 2013 to find out how surveillance is affecting writers and free expression. The results of the survey, published in our Chilling Effects report, are striking: 1 in 6 writers has avoided writing or speaking on a topic they thought would subject them to surveillance. 1 in 4 has deliberately avoided certain topics in phone or email conversations. 1 in 6 has refrained from conducting Internet searches or visiting websites on topics that may be considered controversial or suspicious.

The results of the survey reflected my own experience in the wake of the Snowden revelations. The knowledge that the NSA is collecting vast amounts of information about my personal, private communications and online activity has given me a new understanding of what it means to chill speech. I am no longer really alone with my thoughts, at least not online—and for the vast majority of us, a great deal of our thinking and speaking is done online. Now, when I work, write, and do research online, I do it under the watchful gaze of the NSA. I can feel myself hesitating before entering certain search terms or expressing certain thoughts in an email to a friend. And though I fight that hesitation and refuse to give into it, I worry also about the subconscious changes that may be occurring: What ideas am I deciding not to explore without even thinking about it? How much am I automatically self-censoring my own writing? What barriers to free thought might be imperceptibly emerging in my mind as I learn more about the NSA’s truly formidable surveillance capabilities?

More troubling, how many others are beginning to self-censor? What happens if all of us, or even just some of us, stop exploring our wildest ideas, probing the darker elements of the world, engaging in dialogue with people whose beliefs make us uncomfortable—because we are afraid someone is watching us? One of the things I love about this country is its embrace of weirdness: Crackpot ideas, fringe groups, and outliers of all stripes abound. Today’s bizarre idea may be mainstream tomorrow. But fear threatens all that. Fear can constrict our curiosity and make us less intellectually adventurous. My worry is that mass surveillance will transform us from a society that revels in free expression and celebrates new ideas into a society that is ever more careful about what we think and say, keeping our words and minds inside comfortable, safe, narrow bounds.

This is why I fight against mass surveillance: Because the right to free expression and the right to privacy are built into the very bones of this country. Being thankful for these rights is not enough. We must also exercise our rights, and demand that our government take the Declaration of Independence seriously: “That to secure these rights, governments are instituted among men, deriving their just powers from the consent of the governed.”  We did not consent to this. We must not accept it.