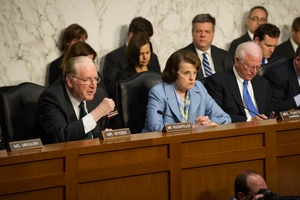 We came closer last week than we’ve come for some time to seeing a senior U.S. government official called to account for his connection with the CIA’s interrogation program. Just close enough to remind us how far away from accountability we really are.

In his confirmation hearing before the Senate Intelligence Committee, CIA director nominee John Brennan offered this less-than-decisive assessment of whether waterboarding is torture:

During the hearing, Brennan was questioned closely by Senator Saxby Chambliss about his knowledge of, and reaction to, the CIA’s abusive interrogation program when he was serving as deputy executive director of the agency during the Bush Administration. His answers were hardly a profile in courage:

Sen. Chambliss: As deputy executive director, you received the daily updates from the time of Abu Zubaydah’s capture throughout his interrogation, including the analysis of the lawfulness of his techniques, putting you in a position to express any concerns you had about the program.Before any of the most controversial techniques, including waterboarding, were ever used. Now we found a minimum of 50 memos in the documents within the 6,000 pages on which you were copied. What steps did you take to stop CIA from moving to these techniques you now say you found objectionable at the time?

Brennan: I did not take steps to stop the CIA’s use of those techniques. I was not in the chain of command of that program; I served as deputy executive director at the time, I had responsibility for overseeing the management of the agency and all of its various functions, and I was aware of the program, I was cc’d on some of those documents, but I had no oversight of it, I wasn’t involved in its creation. I had expressed my personal objections and views to some agency colleagues about certain of those EITs such as waterboarding, nudity, and others, where I professed my personal objections to it, but I did not try to stop it because it was something that was being done in a different part of the agency under the authority of others, and it was something that was directed by the administration at the time.

Sen. Chambliss: You say you expressed your objection to other colleagues, did you ever express any concerns to Director Tenet, to John McLaughlin, to Executive Director Krongard, or to any other CIA leaders?

Brennan: I had a number of conversations with my agency colleagues on abroad range of issues during that period of time, not just on this program but other ones, we would have personal conversations on them.

Sen . Chambliss: My reason particularly for naming those individuals, Mr. Brennan, is that they were the ones directly above you. Mr. McLaughlin has been quoted in the press as saying he never heard from you, he doesn’t doubt that you did this, but he says he never heard from you.We just have not seen anybody who has come forward who said they ever heard any objections from you with respect to these programs.

Moving on, Mr. Krongard, your boss at CIA, told The Wall Street Journal that you had a role in setting the parameters of the program, and I quote “helping to seek Justice Department approval for the techniques.” He went on to say that “John would have been part and parcel of that process.” How does that comport with your response to the committee that you played no role in the program’s, and I quote again in your answers, “creation, execution, or oversight”?

Committee Chair Dianne Feinstein pressed Brennan on whether he had read the Senate Intelligence Committee’s still secret 6,000 page report on the CIA’s post-9/11 rendition, detention, and interrogation program. Brennan, who said he had only read the report’s 300-page executive summary in preparation for the hearing, offered this assessment of what he had read:

There clearly were a number of things that I read in that report that were very concerning and disturbing to me, and ones that I would want to look into immediately if I were to be confirmed as CIA director. It talked about mismanagement of the program, misrepresentations of information, providing inaccurate information, and it was rather damning in a lot of its language as far as the nature of the activities that were carried out. I am eager to see the agency’s response to that report. I read those 300 pages; I look forward if confirmed to reading the entire 6,000-page volume because it is of such gravity and importance.

That’s a lot of countries—and if even just a small percentage of them carry out their obligations under the Convention Against Torture to investigate allegations of complicity in the mistreatment of prisoners, that is a lot of countries that could potentially be holding hearings to grill government officials on their knowledge of and reaction to the CIA’s program. As we noted in our letter to President Obama a few weeks ago, several such investigations are already underway, and the United States has been compiling a rather disgraceful record of impeding those investigations, just as the Bush and the Obama Justice Departments have worked aggressively to derail lawsuits relating to the abuse in the United States.

The record has been so poor, in fact, that seeing the nominee to head the CIA forced to answer questions about his connection to the agency’s torture program actually felt like progress.