In Nigeria, the War on Books is Being Fought on Two Fronts 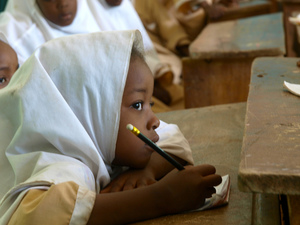 In Nigeria, a war is currently being waged against books on two fronts. The first war involves the militant Islamic group Boko Haram (literally “the book is forbidden”), which has engaged in a violent assault in the economically deprived north of the country, slaughtering school children in their sleep. The second war against books has been launched by Minister of Finance Ngozi Okonjo-Iweala, who levied a 62.5 percent tax against imported books with little warning on February 28. The Boko Haram conflict is a genuine national security crisis, but Okonjo-Iweala’s decision is a misguided, low-level assault on the culture of reading in the country.

There is also widespread concern that the Nigerian government’s response to the threats by Boko Haram–to occupy regions of the north–has been a distraction from other more fundamental problems in the country. Reacting to the book ban, PEN Nigeria Secretary General Oluwafiropo Ewenla wrote:

At this very moment there is a national educational summit happening. It is the 20th of such summits. Little wonder it is all talk and no action. This anti-intellectual legislation is not just going to push books out of the reach of Nigerians; it would practically kill the Nigerian publishing industry. It is the best way to understand the commitment of the Nigerian government to finding a solution to the insurgent Islamist fundamentalism of Boko Haram: the administration of ignorance. Truly, Boko Haram, corruption and impunity are not our problem; not even ignorance. It is a government that alienates books and the intellect.

In October, we joined PEN Nigeria in Geneva to press for freedom of expression at the UN Human Rights Council. We issued recommendations related to internet freedom, religious censorship, and impunity for crimes against journalists. Last week, Nigeria came once again before the UN to accept or reject the official recommendations made by delegates. PEN Nigeria’s joint statement with APC and a host of other local human rights organizations may be found here calling for free expression online and an end to government surveillance.  (I also recommend reading Paradigm Shift Nigeria’s spirited call for an internet declaration in the country.)

At first glance, the levy on imported books might seem like a way to protect local publishers from an influx of foreign texts. But experts on the Nigerian publishing industry do not see it that way, citing the lack of affordable printers and other important factors in production and distribution chains. The tax will harm both local and foreign publishers.

Like many countries, Nigeria is not without its contradictions. UNESCO named the city of Port Harcourt the 2014 World Book Capital (an honor which PEN Nigeria helped to secure) and there will be a major book festival there later this year. The federal government also recently vowed to distribute three million academic exercise books to students across the country in pursuit of the Millennium Development Goals. These are positive developments, but don’t be fooled: the bigger war on books in Nigeria is far from over.