In Cold Blood: Practicing Our Humanity on the Page 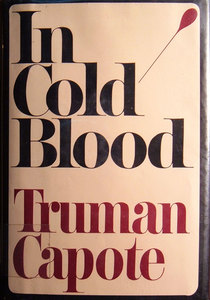 I wept when I finished Truman Capote’s In Cold Blood. I was fourteen years old. The book had been assigned by Mr. Grossman, my ancient and curmudgeonly English teacher, who wore the bitterness he’d absorbed in his decades of public school teaching like a leaden cloak. He taught us grammar and essay composition as if it was his prison sentence, but he also assigned us the most thought-provoking and perspective-shattering books, many of which have been (or attempted to be) banned—Tar Baby and Beloved by Toni Morrison, The Invisible Man by Ralph Ellison, Native Son by Richard Wright, All Quiet on the Western Front, Madame Bovary, One Flew Over the Cuckoo’s Nest, Lord of the Flies, Catch-22, Crime and Punishment, Birdy and more. Books so fierce in their destruction of our naïve preconceived notions of class, race, war, humanity, that I felt as if my perspective was shredded and then reassembled with each and every reading—an experience that was both terrifying and exhilarating. Oh my God, I thought again and again, as I read—This is what it’s like to be another person. This is what it’s like to be a soldier in war, a poor black boy with no chance at a safe future, a woman whose children are ripped from her arms. Not only were Mr. Grossman’s books teaching me how to be a person, they were teaching me about humanity, and, most importantly, I was learning empathy.

I spent most of that year with my nose in a book, looking over my shoulder (both figuratively and literally), waiting for some adult in our nearly all-white, all middle-upper-class community to tear the book out of my hands, to stop Mr. Grossman. I had fearful fantasies of the PTA showing up at our classroom door, or, perhaps, the group of mothers who had just that year shut down the school performance of Gypsy, calling it too lewd.

I’m a natural cynic in my day-to-day life, suspicious of epiphanies and so-called “a-ha moments,” but I’m a relentless optimist once I dive into a book. Suddenly, I’m a believer—in the power of love, of forgiveness, of humanity. In a great book, like In Cold Blood, even the most despicable characters, like murderer Perry Smith, have a chance for redemption, perhaps, one might argue, more of a chance than he or she might get in real life. This sense of promise, an unspoken agreement between the reader and the book, has renewed my faith in people—imaginary and real-life—again and again. Reading is how I practice my humanity. A practice that translates from the page to life. Books have been, and always will be, my best teachers.

My parents, and the generations before them, are survivors—of poverty, war, discrimination, mental illness and domestic abuse. They worked hard to be the best parents they could, despite their handicaps, but my childhood home was an unpredictable, and, sometimes, unsafe, place. Books were my haven. The safe place I could escape to when real life felt unbearable. Even as a young reader, I yearned for stories with high stakes, conflict, drama, and with characters who revealed all, including their flaws, their secrets, their vulnerability. I was more interested in, and related to, the so-called villains with their flaws and weaknesses and so-called unlikability, much more than the heroes. Surrounded by characters whose struggles seemed both equal to and greater than my own, I never felt as alone as I did at home. Books were also where I practiced the forgiveness I’d need to survive at home—a skill I’d apply each time the atmosphere at home grew tense, and, occasionally, violent. As I grew older and my reader’s needs expanded, I searched for novels with the most unforgivable characters. I know now that I was looking for fuel to feed my growing ability to empathize. If I could forgive Lolita’s Humbert Humbert, which I did thanks to Nabokov’s compassionate characterization, I could forgive anyone, even my family.

As a writing instructor, at the end of each session, I ask my students to make a list of ten books that have profoundly affected them as readers; ten as writers; and ten that changed them as readers and writers. This final list of books is the one we carry with us throughout our lives, whether on a wooden shelf, a virtual shelf, or simply in the memory of how that book made us think and feel. There is one book that is on all three of my top ten lists because it has changed me as a reader and a writer—Truman Capote’s In Cold Blood. For me, the ultimate test of a book is how it makes me feel. The more complex my emotional reaction, the more meaningful the book. I loathed and loved Perry Smith. I feared for him and hoped for him. Capote’s compassionate rendering of Perry Smith’s fractured consciousness, and his mental illness, allowed me to forgive Smith’s hideous crimes. These moments of forgiveness may have been few—just a glimpse here and there throughout the book where I felt a strong and authentic empathy for Smith. But all it takes is a moment, a chance for the reader to glimpse vulnerability in a so-called “bad guy,” and it feels as if a mirror is held up in front of the reader’s face, forcing us to see that, no matter the situation, we share those same flaws and fears and needs with a person we may desperately want to dismiss. For a moment, the reader understands that no one is collateral damage, no one should be dismissed, no matter their sins, and this is where the redemptive act of reading, of books, of practicing our humanity, leaps off the page and into our lives.