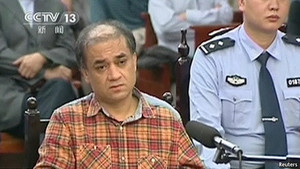 This morning, we woke up to the devastating news that Ilham Tohti, the 2014 PEN/Barbara Goldsmith Freedom to Write Award Winner, was sentenced to life in prison by a court in China. PEN’s denunciation of the verdict was cited in the New York Times’ this morning.

A writer, scholar, and leader in Uyghur PEN, Ilham Tohti founded Uyghur Online, a forum for dialogue between China’s Muslim Uyghur minority and majority Han populations. He was arrested in a violent raid on his home in January of this year and charged with “separatism”—an allegation that his writings firmly reject.

“Today, Ilham Tohti becomes another casualty of China’s war on words,” said Dominc Moran, Director of Free Expression Programs. “His conviction makes a mockery of China’s professed commitment to social harmony by silencing one of the country’s unifying voices and, with it, fellow Uyghur writers who are now unlikely to dare speak out. PEN upholds Tohti’s innocence, decries the profound iniquity of this judgment, and holds deep concerns regarding his maltreatment in detention. We maintain hope that, with time, justice will prevail and he will be freed to return to his wife and children.”

Those who were with us at this year’s PEN Gala will never forget the sight of Ilham’s daughter, 19 year-old Jewher, standing at the podium in a traditional Uyghur hat to call us all to action in demanding her father’s release. “I want to emphasize one point,” she said this morning. “My father did not commit a crime. My father did not harm anyone. My father is innocent. Even a one-year sentence is unacceptable, much less life imprisonment!”

As he was dragged out of the court this morning, Ilham spoke the last words we may hear from him in a long time: “This is not just! I won’t give in.”

We hope you, too, will refuse to give in. We will reach out with further plans in the coming days, but for the moment, please use this form to send a personal message of support to Jewher and her family, including Ilham’s wife Guzelnur and their two young sons. PEN will ensure that all of your messages are translated and transmitted to Ilham’s family at this difficult time.

The photo above of Tohti at trial was released by China’s official state media. “Ilham has suffered tremendously,” writes his friend Elliot Sperling. “But he is not a broken man, not by any means.”