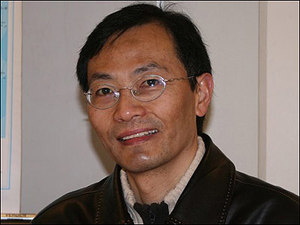 On Friday, September 7, we received news from our Independent Chinese PEN Center colleagues that Dr. Jiao Guobiao, an ICPC member based in Beijing, was put under house arrest to prevent him from attending the 78th PEN International Congress, now underway in Gyeongju, South Korea. A delegate from the Chinese PEN Center, not to be confused with ICPC, which includes many independent and more critical voices, including Nobel Peace Prize Laureate Liu Xiaobo, was permitted to attend. PEN International President John Ralston Saul and International Secretary Hori Takeaki sent the following letter to Chinese President Hu Jintao yesterday protesting this flagrant disregard of the rights of critical voices inside China.

The writers of PEN International , gathered together here in Gyeongju, Korea, for our 78th Congress, wish to express our deep regret that our colleague Dr. Jiao Guobiao, a member of the Independent Chinese PEN Center (ICPC), has been prevented from traveling to Korea to participate in the Congress by the Chinese authorities.

Dr. Jiao Guobiao, who is based in Beijing and is a former associate professor at Peking University’s College of Journalism and Communications, was reportedly warned on September 6, 2012, by state security police in Beijing’s Haidian District that he was not allowed to go to Korea to attend PEN International’s 78th Congress, which he had registered to attend. The police are said to be stationed outside his home and he is currently under tight surveillance. Dr. Jiao, a prominent journalist who worked for the Chinese Cultural Newspaper from 1996-2001, has published widely on the issues of press freedom and human rights in China. He was suspended from his teaching duties in March 2004 following the online publication of his critical article entitled “Denouncing the Central Propaganda Department.”

The Assembly of Delegates notes that the official delegate of China PEN, Zhang Tao, has been allowed to attend the Congress, and is outraged at this flagrant disrespect for the rights of critical voices in China, who are subject to arbitrary arrest without charge, abduction, assault, and intimidation. According to PEN’s information, since February 2011 over one hundred human rights defenders and activists in China have been arbitrarily detained, harassed or intimidated, including several ICPC members.

PEN International reminds the Chinese authorities of their obligations under Article 35 of the Chinese constitution and Article 19 of the International Covenant on Civil and Political Rights, to which it is a signatory, to protect the right to freedom of expression and assembly of all its citizens, including Dr. Jiao Guobiao.

We call for all restrictions against Dr. Jiao Guobiao to be lifted, so that he can immediately leave Beijing in order to join us for the remainder of the congress.