I Am an American Guy: A Conversation with Catherine Wagner 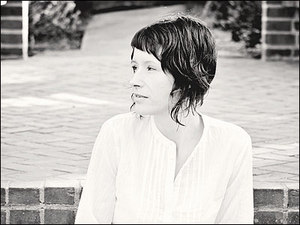 What’s your favorite line of poetry—ever?

Name 10-12 contemporary poets whose work you are interested in and explain why it appeals to you.

Ronaldo V. Wilson’s last book, Poems of the Black Object, was brave and hot. I loved the hotness and brilliance of Julian Brolaski’s Advice for Lovers, too. Juliana Spahr, there’s a weird and achieved and effective style that holds itself wide open for next. Dana Ward is a great performer and poet who is lush and expressive while being hardcore aware of the pressures from recent avant-gardes on such moves.  Douglas Kearney’s The Black Automaton is wonderful—students love this book and they get it. I especially love the visual poems and song pieces, and I like that the book refuses no method for poetic argument; it’s slutty like that. I look at anything by Aaron Kunin, who is an odd funny grim philosopher poet, brilliant and heartbreaking, and by Ariana Reines, who’s working this artificed aura and charisma, she theatricalizes herself as self-exploding package (plus just some good poems). There are a generation or so of astonishing younger British poets unknown over here that deserve to be more known so I will mention a few of them too, Nat Raha, Joe Luna, Francesca Lisette, Luke Roberts, Emily Critchley, Marianne Morris, Frances Kruk, Sean Bonney, Andrea Brady, Keston Sutherland, Tim Atkins, Jeff Hilson. To get at some of them over here look at the magazine Damn the Caesars, and there’s a Chicago Review a few years old now on new British poets, and a recent issue of Fence has a selection.

I’m interested in the influence upon poets of art peripheral to their writing. What I have in mind are those films, fine arts , folk crafts, music, etc., which are extremely important to the way the poet thinks, or to the technique of the poet’s work, or even to the poet personally, or in any way that those works don’t actually become the subject of a given poem. For example, I imagine a poet who greatly values and who has been impressed upon by the work of Wong Kar-Wei, Bunuel, Hitchcock, Fassbinder or some other director’s work, and yet whose poetry would leave the average reader largely unaware of this relationship. Could you speak to this phenomenon as it applies to you? I’d be particularly fascinated to hear you speak to cinema that is important to you, but if there is another medium you’d prefer to address, run with it.

I wish I could give you some film, Adam. I have had some film-watching projects—watched a lot of cowboy movies at one time, mostly to think about being an American guy (I am an American guy), and have spent time with work by all the directors you mention. These days I watch a ton of Miyazaki with my son. But film doesn’t jumpstart my writing in ways I’m aware of. Music does. I am curious about how music polarizes the nerve-cells and changes your mood. (Thinking about the complications Gwendolyn Brooks registers with her voice when she reads—the poems are as subtle as they are on the page but very different—the subtleties are constructed out of weird amped swervy intonation, tensile control, vocal texture, I hope to learn to do this better.) Appalachian songs, thirties forties recordings, have probably influenced my writing most.

Some of my poems start as songs (dummkopf simple songs, I wish I would write a bridge). When the words curve around the music, there’s a path that swerves the words but is also flexible, adulterable itself (the music can change and adapt). This summer I have been writing melodies for some anonymous medieval lyrics, to get to know the poems better and see whether I can sing them without messing them up.

Also I listen to hiphop both new-poppy and classic, and to pop, I can’t get enough of the totally obvious marvelous summer anthems, Katy Perry, Nicky Minaj, Beyonce; I think we are in a particularly fine era for pop; I used to be offended by “overproduction” but now I think it’s interesting that these songs are so overtly made and so collaborative; you can track producers like Stargate or Dr Luke or DJ Premier through different pop/hiphop artists.

Aside: it cracks me up when “collaboration” is tossed around as a good, as a desirable in itself, when where collaboration gets really maxed out is in the ultra-capitalist hit music studio, in the Monsanto lab, etc. What kind of collaboration?

Aside: are these commercial pop songs bad/for us—well here we are—being attracted—having pleasure. My own pleasure in these songs I can’t deny. Poems give pleasure too, and interrupt the pleasure and restart it, a sexual build, a social place, an awkward party where you feel good then weird then good and maybe dance. Poems wrap around the pleasure so that you think about your interaction with it. Art aestheticizes—I want it to—yes freaking CRAFT it—it’s a way to think and get your body involved in thinking—pleasure can be very alerting, painful.

Aside: it’s a nonsense the anti-craft business—it reduces craft to fiddly decor (and what’s wrong with decor, Lisa Robertson has been into it as a feminist strategy in her writing for years). Let’s attack notions of poem-as-product, but it’s wrongheaded to make anti-craft a necessary part of that attack. Craft is how you make—it is deadly important—it is not necessarily to do with materiality or skill or finishing or commodification, it is to do with caring, it is a mode of love (which can manifest aggressively of course)—craft exists in relation to what the artwork is—it can be messy and still be loving—it need not even be material—conceptualist craft for example has to do with carefully leveraging relation to frame and system.

It seems to me that very, very few poets engage with the intersection of family/parenthood and sex/sexuality, despite the clear connections between those subject areas. You do it often and with great complexity and nuance. It’s a really compelling aspect of your work. Can you talk a bit about how you perceive the intersection of those two subject areas, or perhaps why you’re drawn to writing about them?

You’re verging on a question about incest taboo, and I love messing with taboo but have trouble making that taboo thinkable in regular-life non-poem-mind—can’t think sex-with-kid all the way, no no, not that that is what you are asking. However: my body is full of buzz and the buzzings overlap, which is simply the case, not just for me I am sure and I am not ashamed of it. But I am much readier to manifest these things I can’t think in regular life in my poems; no idea how to do so here; that is why poems.

Having said that my goal right now is to be as brave elsewhere (relationships, work, activism) as in poems. Poems have till recently been almost the only place I have been able/willing to be brave, which sucks and isn’t good enough.

Your work has an intuitive feel to it, it seems to show not only a sophisticated mind at work, but also a body, or body-driven experience of the world at work. Can you talk a bit about control in your writing—about the balance between the intuitive and the curated in your pre-revision writing process?

I was going to say that I work hard to evade intentionality when drafting—use various processes such as trance or procedural methods—don’t make up what I write down at all—if I write it “myself” I’m dead bored. But to say I don’t make it up myself is different from saying there’s no “curation.” You can’t really evade intention (as Jackson Mac Low realized) and neither can you avoid swerving, because you’re in the world, it’s going to get in your face and move you.

I do revise a lot, often with the goal of artificing slapdash mind moves (tactic stolen from Alice Notley, also Frank O’Hara, John Wieners). Yes there was intuition but then it’s illusorized, see craft thing above. If I didn’t “craft” I would be asserting something I don’t believe about the truth-value of the intuitive process, what I contact when I trance and write poems. If I am to get at anything unfamiliar (why else would I write) I have to get into nonrational headstates. But whatever I get at, I have to buff up the maneuver to make it shiny enough to untrust.