HUNGARY: New NGO Law Will Have Chilling Effect on Freedom of Expression 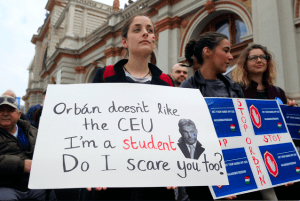 Hungary’s new law imposing new restrictions on non-governmental organizations (NGOs) is an attack on the rights to freedom of expression and association and will have a chilling effect on dissenting voices, PEN International said today.

On June 13 the Hungarian Parliament approved Draft Law T/14967 on the Transparency of Organisations Receiving Support from Abroad with 130 votes for, 44 votes against, and 24 abstentions. The new law will compel NGOs that receive more than 7.2 million Hungarian Forints (approximately 24,000 euros) to re-register as a “foreign-supported organization” and to identify themselves as such on every publication, or risk closure.

The Hungarian authorities have claimed that the purpose of the law is to fight against money laundering and terrorism funding. Yet the majority of NGOs that receive foreign funding focus on civil and political rights and are as a result more likely to be critical of the authorities and of their policies.

“By compelling NGOs to identify themselves as foreign-supported organizations, the new law will stigmatize and delegitimize their work and ultimately silence critical voices,” said Carles Torner, Executive Director of PEN International. “Its adoption marks another dark day for freedom of expression and association in Hungary.”

The vote comes amidst a broader crackdown on independent civil society groups in the country. The Hungarian authorities have, for years, been targeting a number of NGOs, including organizations associated with the philanthropist George Soros. The National Act on Higher Education, adopted in April 2017, was essentially designed to force the Central European University (CEU) into inoperability, a move denounced by PEN International and other human rights groups as an attack on the CEU’s right to academic freedom and independence.

“The adoption of Hungary’s new NGO law is another deliberate attack on freedom of expression and association in the country,” said Carles Torner. “We urge the Hungarian authorities to reverse this dangerous trend immediately.”

Existing legislation already compelled Hungarian NGO to report annually on their foreign funding. The new NGO law places additional burden by requiring NGOs designated as “foreign-supported organizations” to report annually on the names, countries, and cities of foreign donors, including private individuals, for each transaction. Failure to register as a “foreign-supported organization” would result in a fine and failure to pay the fine could ultimately lead to the NGO’s dissolution. The law does not apply to sports and religious organizations, as well as political parties and trade unions.

Several human rights bodies and experts have criticized the new law. In April 2017, the Council of Europe Commissioner for Human Rights Nils Muižnieks called on the National Assembly of Hungary to reject it. In May 2017, the UN Special Rapporteurs on the promotion and protection of the right to freedom of opinion and expression, on the rights to freedom of peaceful assembly and of association, and on the situation of human rights defenders sent a joint letter to the Hungarian authorities raising their deep concerns, while in June 2017 the Venice Commission published a preliminary opinion highlighting numerous problematic aspects of the law (the opinion adopted at the 111th Plenary Session on June 16 and 17 will be published shortly).

Hungary’s new NGO law is reminiscent of Russia’s so-called “Foreign Agents Law,” which places onerous restrictions on NGOs receiving funds from abroad, targeting independent NGOs. By the end of 2016, the register included 146 organizations, of which 35 had permanently closed down.