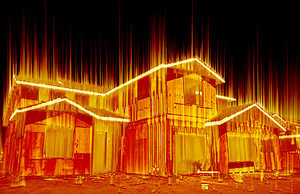 When I tell my grandfather
I am writing about Jane, he says,

What will it be, a figment
of your imagination?

We are eating awful little pizzas
and my mother is into

the boxed wine. I don’t know
what to say. I wish

I could show him: between
figling (a little fig)

to form. As used in 1592:
The excellencie, dilicatnes, and perfection of this figment cannot be suffi[ci]entlie expressed.

But he doesn’t want to see.
Besides, that meaning

We must not conceive that this logical figment ever had a real existence.

I invent her then, as a woman emerging from the sea. A tall man meets her on the black sand. You’ve come back, he says. Can barely see her in the sea-light. They make love there, and become horses. As night grows black they become weeds.

She asks him quietly in the dark to tell her about the mother of everything and he did not know of whom she was speaking. She asked the volcano and the volcano belched great streams of wet ash. She lay her head down with fatigue and found her head on a pillow of ink. Upon waking she stretched her arms around the globe and found her fingers weren’t even close to touching.

A Philosophy of Composition

“‘Of all melancholy topics, what, according to the universal understanding of mankind, is the most melancholy?’ Death—was the obvious reply. ‘And when,’ I said, ‘is this most melancholy of topics most poetical?’ From what I have already explained at some length, the answer, here also, is obvious—‘When it most closely allies itself to Beauty: the death, then, of a beautiful woman is, unquestionably, the most poetical topic in the world.’”

Too bad Franny’s mother
wasn’t right—too bad
I don’t just need
a warm bowl of soup
and a long sleep.

They say elephants can recognize the bones of a dead loved one when they stumble upon them in the wild. They will stop and wander around the huge decaying bones, swinging their trunks, braying in despair.

The voice-over on TV might say, The elephants know that these are the bones of Dolly. They are mourning the loss of Dolly. But Dolly is our name, not theirs.

It feels different to mourn something without naming its name. A fetus, a snake you call Snake, a woman with no Social Security number and the commonest of names.

I was born four years later, almost to the day.

Her grave has no epitaph, only a name.

I found her in the wild; her name was Jane, plain Jane.

According to family lore, there was a great bonfire in which all of Jane’s possessions perished. Her journals, her clothes, her scrapbooks, her books, her typewriter, her school papers, her love letters. Her parents supposedly set this fire a few days after she was killed, when they went to Ann Arbor to clear out her things. The way my mother remembers the story, they set the fire outside her room at the Law Quad.

The Law Quad is a grassy, public area, traversed by several cement paths and surrounded by ivy-covered Gothic buildings, one of which is the main law library. Upon returning to the spot, my mother agrees that the idea of my grandparents, two very private people, setting a large bonfire there and feeding Jane’s belongings to the flames seems unlikely.

But questions remain. Where was the story from, and where did the belongings go?

One day rummaging through
the “utility room,” I find
a few loose pages of a journal

I assume is my own: pages
and pages of self-doubt;
a relentlessly plaintive tone;

and a wanting, a raw wanting
not yet hidden in my
poems. But I don’t have

a beautiful, hard-leaning
script, nor was I alive
in 1966. The journal is

Jane’s, from when she was
twenty years old. After
making sure no one’s at home,

I sneak into my mother’s office
and Xerox all of it, then carefully place
the original back where it belongs.