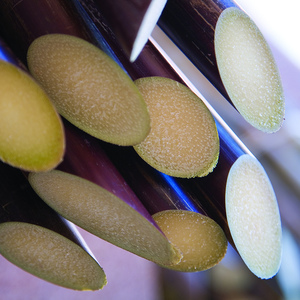 Rajiv Mohabir is the recipient of a 2015 PEN/Heim Translation Fund Grant for his translation of Lalbihari Sharma’s Holi Songs of Demerara. Published in 1916, Sharma’s collection of folksongs is the only known literary work to be written by one of the thousands of East Indians indentured to work the sugarcane fields in Guyana. Read Mohabir’s essay on translating Holi Songs of Demerara here.

I can’t stay inside, take me
with you, Mohan. Love, tell me,
“Come with me.” I’m shameless
for you, my life. Now love

finds you, listen son of Yashomati.
Without you I can’t tell
dawn from dusk, family from foe,
mother from father, I’ve lost everything.

Love once faceted doesn’t abate;
my eyes have become jewels.

Lalbihari says,
“The lotus face can’t be forgotten,
no matter how you try.”

As the bell tolls five, the pot heats on the fire:
rice and yogurt boil with sugar.
I eat my fill and the sardar comes to the door,
bringing orders we must endure. Washing
the pot I keep the rice, I prepare my chillam pipe
to deal with this. Men and women join together
bearing hoes on their shoulders, the way clogged
with those who have come to Demerara.

I’ve searched for ages;
my beloved’s nowhere. I can’t
hunger or thirst. Sleep is a distant dream.
I am in misery. After drinking

his flute, peace is a myth.
No charm, no magic, no mantra,
no medicine cures my restlessness.
I ask leaves and plants,

“Have you glimpsed Krishna?”
O Jasmine, Earth, and Tulsi,
you are my only friends. Night and day
I cry, “Hari. Hari.”

In a split second Nanda-Yashomati’s
beloved son disappeared
into the forest. Lalbihari is blind
to all else but Krishna.

Then behind us comes the sahib,
hat high on his head.

Grasping a whip, horse
cantering, he reaches the field.

Dark clouds gather at night.
Piya vacates my bed,
my life hisses as it burns.
My beloved does not come

even though I litter my sheets
with flowers. He stabs me
with the frozen dagger
of distance. I squander my youth

in my father’s home, no one
knows my pain. I may as well
remain a virgin or have a bullet
or sword pierce my heart.

Tell my beloved my chest pains me.
Since my love and I don’t speak,
he has not seen my tears.

Lalbihari regrets,
“Who do I tell of this heartbreak?”

In this manner five years pass
contracted to steady woe. With a ticket,
the heart, like a chitor bird,
cries out to the moon.
Such mirth! Some act as sadhus,
some fakirs, wildly prancing
all around, without any idea
of what comes next.

At last, this world is a sham,
a dream, a lie:
wealth, family, greatness,
riches, kinship, fame—
all illusory.

None of it is yours.

Lalbihari Sharma was born in Chhapra village in the United Provinces of India (now Bihar, India). Sharma was indentured by the British East India Company to work the sugarcane fields and published his chautal folksongs in 1916. A musician and singer, he is the first Indo-Caribbean writer to write and publish one of the only books written in the dialect of his village. Not much is known about his life other than the autobiographical information included in his work.

Rajiv Mohabir, winner of the 2014 Four Way Book’s Intro Prize (The Taxidermist’s Cut, 2016), the 2015 Kundiman Prize (The Cowherd’s Son), and the 2015 AWP Intro Journal award, is a VONA and Kundiman fellow. His poetry and translations appear in Best American Poetry 2015, Quarterly West, Guernica, Prairie Schooner, Crab Orchard Review, and Drunken Boat. He received his MFA in Poetry and Translation from Queens College, CUNY, and is currently pursuing a PhD in English from the University of Hawai`i, where he teaches poetry and composition.