“His freedom guarantees mine”: J. K. Rowling at the 2016 PEN Literary Gala 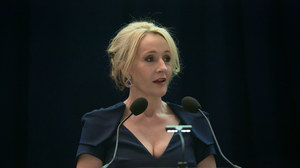 Firstly, I want to say thank you very, very much for this huge honor, given as it is by an organization that I have admired very deeply for many, many years. It’s also been an absolute privilege to share this stage tonight with your previous honorees. PEN’s campaigns on behalf of imprisoned writers are essential and inspirational, though it is sad to reflect how much, how needed your defense of writers continues to be today.

Speaking personally, I have very little to complain about where my freedom of expression is concerned. I was once confronted by a Christian fundamentalist in a toy shop here in New York. I had no idea the phrase, “I’m praying for you,” could sound so intimidating. A bomb threat was once made to a store at which I was appearing. The premises were searched, nothing was found, the event went ahead. And the Harry Potter books have figured frequently on lists of the most banned. But, as such lists feature many of my favorite writers, I’ve always been very flattered to be included.

Of course, I can afford to take these things lightly, protected as I am by citizenship of a liberal nation where freedom of expression is a fundamental right. My critics are at liberty to claim that I’m trying to convert children to Satanism., and I’m free to explain that I’m exploring human nature and morality, or to say, “you’re an idiot,” depending on which side of the bed I got out of that day.

However, I’ve never taken these freedoms for granted. In my 20s, I worked for Amnesty International, where I learned exactly how high a price people across the world have paid and continue to pay for the freedoms that we in the West sometimes take for granted.

In fact, I worry that we may be in danger of allowing their erosion through sheer complacency. The tides of populism and nationalism currently sweeping many developed countries have been accompanied by demands that unwelcome and inconvenient voices be removed from public discourse. “Mainstream media” has become a term of abuse in some quarters. It seems that unless a commentator or television channel or a newspaper reflects exactly the complainant’s worldview, it must be guilty of bias or corruption.

Intolerance of alternative viewpoints is spreading to places that make me—a moderate and a liberal—most uncomfortable. Only last year, we saw an online petition to ban Donald Trump from entry to the UK. It garnered half a million signatures.

His freedom to speak protects my freedom to call him a bigot. His freedom guarantees mine. Unless we take that absolute position without caveats or apologies, we have set foot upon a road with only one destination. If my offended feelings can justify a travel ban on Donald Trump, I have no moral ground on which to argue that those offended by feminism or the fight for transgender rights or universal suffrage should not oppress campaigners for those causes. If you seek the removal of freedoms from an opponent simply on the grounds that they have offended you, you have crossed the line to stand alongside tyrants who imprison, torture, and kill on exactly the same justification.

I’d like to conclude these remarks by reading you two short passages from the blog of a teenage girl. In 2009, Tal al-Mallohi became one of the youngest prisoners of conscience in the world when she was taken from her home by Syrian security forces. She was 18 years old. Her friends and family had to wait eleven months to find that she had been charged with giving aid to foreign country. Her parents have been permitted to see her only once. There are fears she may have been tortured.

This is some of the material that was considered so dangerous and inflammatory that she remains incarcerated:

I do not like the words of the poet Rudyard Kipling: “The East is East and the West is West and never the twain shall meet.” Instead, I promote the union of the East and West. They meet somewhere. With rational thought, two great souls from here and from there can agree with each other, irrespective of the vast separation of time and space. Oh my brother human, if I disagree with you in thoughts, principles, or beliefs, does this deny the fact that we are both human? All you and I have to do is to respect each other. Tolerate the views of your opponents coolly and patiently. While listening to them, do not think to respond before listening to all opposing opinions.

I repeat that beautiful plea for plurality, tolerance, and the importance of rational discourse in the hope that Tal al-Mallohi will soon be freed. In the meantime, long may PEN continue to fight for her, for the freedoms on which a liberal society rests and without which no literature can have value. Thank you very much indeed.

Zimbabwean journalist @daddyhope tweeted that it would be "a major disaster especially in Africa where State sponsored Ghost accounts were suspended for endangering human rights activists & journalists!"
https://www.axios.com/2022/11/25/musk-suspended-twitter-accounts-amnesty-plans-alarm-activists

⭕️ Online abuse shouldn't silence people or stop them from sharing their perspectives.

@NDI and @PENamerica have created an Arabic-language manual to help journalists and activists protect themselves online and navigate the digital landscape. ⬇️
https://onlineharassmentfieldmanual.pen.org/ar/

The reason I’m not leaving — yet, anyway — is that I dread “unwinding connections to sources, colleagues,” and over 1.35M followers. The alternatives don’t yet ”offer the same reach, or the rich vein of dissimilarity across social and geographic lines.”
https://www.newyorker.com/news/daily-comment/why-i-quit-elon-musks-twitter