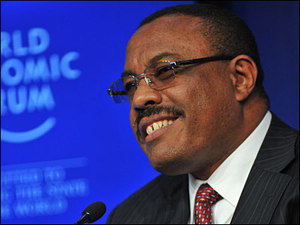 Ethiopian Prime Minister Meles Zenawi, whose assault on press freedom led to the jailing of a number of journalists—and the exodus of many more—died last week in Brussels. Now Hailemariam Desalegn takes the helm as acting prime minister. Will he reverse the course that his predecessor led against free expression?

We are writing on behalf of the 3,000 members of PEN American Center to ask you, as you assume leadership of the Federal Democratic Republic of Ethiopia, to review the cases of a number of our colleagues in the Ethiopian press who have been convicted unjustly for criminal offenses simply for practicing their profession.

Leading PEN’s list of those who have been so convicted is Eskinder Nega, who as you know was sentenced last month to 18 years in prison for articles and public statements expressing viewpoints your predecessor disfavored. The trial and conviction of Eskinder and 23 others under Ethiopia’s vaguely-worded anti-terror legislation attracted international attention to the climate for press freedom and freedom of expression in your country—a climate that contrasts sharply with the image of achievement and progress that Ethiopia aspires, for many commendable reasons, to project.

In all, PEN has followed the cases of an increasing number of journalists who have been harassed, arrested and tried before the courts, or forced to seek refuge outside the country because of their work over the last several years. Reeyot Alemu, journalist for the weekly newspaper Feteh, was arrested on June 21, 2011, and convicted of terrorism in January of this year. Her 14-year sentence has since been reduced to five years on appeal, but she still remains in prison for her writing. Her colleague, Temesgen Desalegn, has been targeted for his editorials on Eskinder Nega and was jailed on August 23, 2012, after the government gagged Feteh for reporting on Meles Zenawi’s health. And Dawit Kebede, managing editor of Awramba Times and one of 13 journalists arrested in 2005 after reporting on the government’s violent crackdown following disputed parliamentary elections, fled the country in November 2011 after he received a tip that his 2007 pardon would be revoked. These cases, and many like them, have earned Ethiopia a reputation as one of the most inhospitable countries on the planet for press freedom.

We recognize that in your first days in office you are confronted with a host of challenges that may seem more pressing than the question of whether Ethiopia’s citizens are able to exercise the right to freedom of expression they are guaranteed under international and Ethiopian law. And yet we believe that addressing that question, and acting to restore the rights of Eskinder Nega and all other journalists who have been imprisoned in the course of carrying out their professions, will have a profound impact on Ethiopia’s ability to meet challenges, and extend its economic successes in particular, in the future. Press freedom is both a vital catalyst for, and a benchmark of, that progress.

As you assume office, you have a unique opportunity to correct course and set a new, more positive tone for press freedom and freedom of expression in Ethiopia. We were encouraged to learn today that the charges against Temesgen Desalegn have been dropped. We entreat you similarly to review the cases of Eskinder Nega and all journalists who have been convicted for their words and their writings, and to set them, and the Ethiopian press, free.