Hadriana on the Lap of God 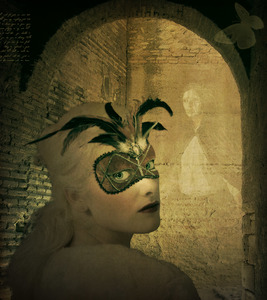 Hadriana on the Lap of God is translated from the original French. Read Glover’s essay on translating Depestre here.

Long before the clock struck 10 p.m., Hadriana Siloé’s catafalque had been placed between two rows of candles in the middle of Lovers Lane. The stars shone so low that they seemed part of the chapel. People had brought chairs and benches from all the nearby houses. When the open coffin arrived, the carnival drums all stopped at once. Not yet knowing what to do with the wretched dog that was my solitude, I took advantage of the sudden calm to slip into the crowd.

The carnivalesque bands had completely taken over every square meter of the plaza. As expected, the most prominent people of the southwest region were there. For the time being, musicians and dancers seemed to be bivouacked amongst their sleeping instruments: drums, vaksin horns, conch shells, rattles, saxophones, flutes, trumpets, and accordions. Dispersed here and there, eating and drinking under the trees, people began telling all those tales one tells at wakes.

I stopped first in front of a group of men dressed up as women. They had placed pillows and cushions under their green satin dresses, so as to simulate the final stages of pregnancy. They had the breasts and buttocks of the Callipygian Venus. Leaning on their clubs, the cross-dressers conversed with another group of revelers who, having wrapped themselves in white sheets and stuffed their ears and noses with cotton, spoke in a decidedly nasal voice. A few steps away from these counterfeit-dead, a few half-naked werewolves, glazed from head to toe in cane syrup and soot, seemed to be plotting amongst themselves. The tin cones affixed to their fingertips clicked at the smallest of gestures. They had stuck orange peels between their teeth and lips, giving their faces a terrifying expression.

A little further, I came upon the Charles-Oscars of Madan Ti-Carême: adorned with blue and red kepis, they wore black fitted coats with saffron yellow buttons, scarlet pants tucked into white gaiters, and giant spurs at their heels. Every Charles-Oscar boasted his military prowess with a sign hanging from his back: “Colonel Later-and- Sadder,” “Commander-Who-Gives-Each-Household-Its-Share-Of-Tribulations,” “Divisional-General-Of-The-Seriously-Malicious-Member.”

Near the musical kiosk I came upon a school of Pierrots in multi-colored clothes, wearing pale blue masks of metal cloth and bells on their belts. Alongside the police headquarters, Carib Indians, brilliant in their plumage, paid tribute to a demijohn of rum, their bows and arrows piled up on the sidewalk. Disguised as a vulture, the Prefect’s parrot General Télébec mockingly repeated:

“Here’s to you, you Indian pieces-of-shit!”

Camped out on the terrace of the Star Café were the Mathurins – that crew of devilish boys there to channel Jacmel’s esteemed Mathurin Lys, the magical delegate who had fought long ago to put our dreams on the map. Clothed in loose bathrobes, they sported multi-colored papier maché Bolivar-hats garnished with peacock feathers and long braids, and topped with assorted objects – horns, dolls, medallions, glass beads, small mirrors, amulets – all held together by a madras cloth and roped to a kind of bamboo mast.

Other masqueraders had set up camp on the eastern and western edges of the square. Indian caciques frolicked freely with young Arawak beauties whose bare breasts rested harmoniously above brightly colored pareos made of woven straw. Queen Elizabeth’s pirate bands, the Brothers of the Coast and the Dogs of the Sea, had tattoos of skulls and snake vertebrae on their torsos. Under Francis Drake’s tender gaze, they fearlessly felt up the sumptuous buttocks of Bambara African girls who wore nothing but flowered turbans, their pubis hidden by a white velvet loincloth, their lips and eyes phosphorescent.

Barons and Marquises of the court of Louis XIV played leapfrog on the lawn with friars in the habit of third-order Capuchins, rosaries on their belts, wooden crosses on their chests. High-ranking officers, black and mulatto, in the uniforms of the Grand Army of Napoleon, arm-wrestled amicably with Marine Corps officers from the days when President Wilson’s assault troops occupied our island.

In the colorful crowd I also recognized Simon Bolívar himself: completely and totally naked, he was engaged in an epic parry and thrust with the fervent and barbarous flesh of Pauline Bonaparte, while Toussaint Louverture, in the uniform of the Governor of Saint-Domingue, jokingly pulled the ear of General Victor-Emmanuel Leclerc, the magnificently cuckolded husband of the future Princess of Borghese.

King Christophe, on an official visit to Versailles, paced majestically – arm-in- arm with the wife of Charles X – in front of mirrors that reflected sparkling images of a pleasure party to come. In a neighboring salon, Alexandre Pétion, mulatto and republican, was busy kissing the prodigiously lyrical thighs of the very young Madame Récamier with a passion equal to that of the other Alexander, the Macedonian general.

A few feet away, the Haitian emperor Jacques I played some form of table tennis with his partner, Generalissimo Stalin. Joseph Vissarionovitch Djougatchvili was decked out in the formal costume worn by all Russian tsars. Those two little fathers of their people showed equal dexterity as they volleyed back and forth with a human head that had been shrunken using a technique invented by the Jibaro Indians. This primitive ping- pong ball changed from black to white to yellow or red in accordance with whichever World Championship was being disputed.

All over the square, the various masks reconstituted the particular time and space that corresponded to the heroes they represented, at the moment of their participation in the history of the planet. But historical memory had gotten mixed up to the point of ridiculousness, not unlike the paths that once led people from the Capital to the Tarpeian Rock. Alongside all the legendary characters, but never truly joining them in their fantastic adventure, roamed a host of other Jacmelian visions, just as fancifully dressed, but who had opted for the less spectacular roles of pigs, orangutans, birds of prey, bulls, sharks, cobras, crocodiles, tigers, tontons-macoutes, and leopards.

This masked occasion had convoked three centuries of human history to my sister’s wake. Figures sculpted from the purest marble and figurines of rotten wood had come together to dance, sing, drink rum, and refuse death, kicking up the dust on my village square, which, in the midst of this general masquerade, took itself for the cosmic stage of the universe.

René Depestre is a Haitian poet and former communist activist. He is considered to be one of the most prominent figures in Haitian literature.He lived in Cuba as an exile from the Duvalier regime for many years and was a founder of the Casa de las Americas publishing house. His first volume of poetry, Sparks (Etincelles) was published in Port-au-Prince in 1945. Other publications include Gerbe de sang, Végétation de clartés, Traduit du grand large, poème de ma patrie enchainée, Journal d’un animal marin, and Un arc-en-ciel pour l’occident chrétien poeme mystère vaudou. His poetry has appeared in many French, Spanish, German anthologies and collections. More current works include Anthologie personnelle and Actes sud, for which he received the Prix Apollinaire. He has spent many years in France, and was awarded the French literary prize, the prix Renaudot, in 1988 for his work Hadriana dans Tous mes Rêves.

Kaiama L. Glover is Associate Professor of French and Africana Studies at Barnard College, Columbia University. She is author of Haiti Unbound: A Spiralist Challenge to the Postcolonial Canon (Liverpool UP 2010), co­editor of Marie Vieux Chauvet: Paradoxes of the Postcolonial Feminine (Yale French Studies 2016), and translator of Frankétienne’s Ready to Burst (Archipelago 2014). She has received awards from the National Endowment for the Humanities, the Mellon Foundation, and the Fulbright Foundation. Her translations of Marie Chauvet’s Dance on the Volcano (Archipelago) and René Depestre’s Hadriana in All My Dreams (Akashic) are forthcoming.