Gutted: How Kathy Acker’s “Blood and Guts in High School” Saved My Life 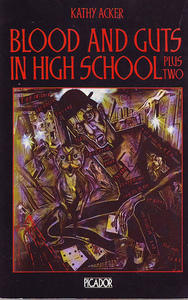 Blood and Guts in High School saved my life.

What I mean by that is, Kathy Acker’s novel helped me not kill myself.

What I mean by that is, this novel about a 10-year-old girl that was banned in West Germany and South Africa, a novel that may as well have been banned in America, since it only existed in a kind of subterranean, black market underworld if you were by chance a young woman reader, this novel about the psychosexual identity formation of a girl body that travels the world and is in turn transgressed by the world, this novel was the central most articulate and precise piece of literature I read during the decade in which I most wanted to kill myself.

Being born a girl is always already a death sentence, because the body of a girl is colonized by culture the moment she arrives.

The decade during which I most wanted to kill myself contained coming to terms with my father’s transgressions by embarking on a sexually frenzied odyssey, a drug-induced epic world tour of counter-cultures, free-flowing abortions and aberrations and unending altered states, an abysmally failed marriage, flunking out of college, a self-loathing crescendo culminating in a daughter who died the day she was born.

For this reason, Kathy Acker’s book saved my life.

In Kathy Acker’s books, a girl body is the site of irreducible resistance.

What was the opposite of bleak, was this. The girl in this story had more agency and voice than any girl I’d ever read or would read in my entire life, and more than any girl I knew in real life. And this: I identified with her story. My father had transgressed the colony of my girl body. Catholicism had ravaged my self story. School was fast destroying my self-esteem, funneling me into some weird cult of good citizenship rather than mutant girl rebel, and this novel literally mapped out a resistance narrative for me.  This book, this author, this girl body said: Make art.

A girl is born and we make a story of her. Daughter. Lover. Wife. Mother. In Kathy Acker’s books, a girl body is the site of irreducible resistance.

And not just any art.

Use poems, drama, letters. Use artifacts, photographs, twigs, thistles, blood and sweat. Use dreams and drawings. Use anything you can find to interrupt the narrative traditions handed to you that silence the story of your body. There is no other writer I learned more from. No other kind of writing gave me more inspiration or hope. And since I had the weird and bent luck to cross her path and briefly know Kathy Acker, I can say this too: I choose Kathy—wrecker of realisms and paternal orders, plagiarist, fabulist, and gender pirate—as my literary mother.

Lidia Yuknavitch is the national bestselling author of the novels The Small Backs of Children, and Dora: A Headcase, and the memoir The Chronology of Water, as well as three books of short fictions, and a critical book on war and narrative, Allegories of Violence. Her writing has appeared in publications including Guernica, Ms., The Iowa Review, Zyzzyva, Another Chicago Magazine, The Sun, Exquisite Corpse, TANK, and The Rumpus. She writes, teaches and lives in Portland, Oregon with the filmmaker Andy Mingo and their son Miles. She is the recipient of the Oregon Book Award – Reader’s Choice, a PNBA award, and was a finalist for the 2012 PEN Center USA Creative Nonfiction Award.

For plans for February's @MTV Africa Awards in Kampala, Uganda to proceed while singer and opposition leader @HEBobiwine remains under house arrest and denied access to food is worse than tone deaf. https://guardian.ng/life/mamas-2021-nigerian-stars-battle-for-continental-honours/