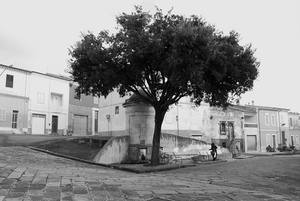 Jacob Moe is the recipient of a 2015 PEN/Heim Translation Fund Grant for his translation of Part Time Dragons by Maria Mitsora, which collects 16 short stories, including “Grace,” from across the Greek writer’s 40-year career. Since the 1970s, Mitsora has been publishing short stories which refract modern Greek life through the lens of its mythological past. Read Moe’s essay on translating Part Time Dragons here.

Many are the undercurrents that run between my memory and the memory of the world… Back in the distant froth of childhood, where new seedlings buzzed in the young belly of spring, even the threat of chains was sweet because they’d be made of fragrances—lilacs, four o’clocks, Arabian jasmine. Winter was a tunnel, always finite, from which we’d emerge. We could even climb to the bell tower, if we wished.

It was early spring, I was ten, when my father brought her to our single-story house in the Athenian neighborhood of Nea Smirni. He had picked her up from a nearby park bench, teary and bruised. At first, she didn’t say a word. She sipped a coffee, swallowing it with difficulty. Her voice wouldn’t come out because her throat was all knotted up. The second coffee she drained with pleasure. Looking back on it now, I’d say she did it with a lightness almost inappropriate to her condition. When my mother served her a glass of warm milk, she suddenly looked at all three of us one by one with great care, and whispered in a soft voice that nothing terrible had happened to her, because her firefighter, her Panagiotis, loved her deep down. My parents became furious. After declaring a Cold War on one another ever since I could remember them, they were shocked by this version of love. Anyway, the decision was taken almost immediately: we’d keep Grace home with us, she’d help out with the housekeeping, have a small wage, and my father would make sure to admonish Panagiotis.

Grace was 23 years old, but she didn’t look more than 16. We left her in the bathroom to wash up, and when she came out, wrapped in a white towel, searching through the closet with my mother for clean clothes—who knows how that deeply buried red dress with the taffeta tail caught her eye, the dress an aunt in America had sent. She donned it immediately. The first night at our house dressed in red like that, with her long black hair, with her shining black eyes, though one was bruised, I thought she’d start dancing a dance of fire and every movement of her bony pelvis would spread the gleaming tail like a fan.

Next morning, in simple clothes, her hair tied back, the red dress all hers by now but hanging in the closet, she did everything with levity and joy, without a trace of haste. The first time Panagiotis drove by in the red fire truck and honked, Grace spilled into the road and my father invited him upstairs to the living room so the men could have a talk. Teary-eyed, Panagiotis didn’t take long to give his word, he would never raise a hand again, he wasn’t to blame either, he’d had such a nasty childhood, his dad having knifed his mom to death.

That year, the tunnel of winter ended particularly early. Easter, though, was late to come. And suddenly on Holy Thursday, Grace announced to my mother she’d take me to church to hear the Twelve Gospels. In the street, bells pleaded sweetly. In front of a garden with an illuminated fountain, between two of Judas’s blossoming trees, she explained her plan to me. She wouldn’t cast a spell, but make a binding pact: with each Gospel she would tie a knot in two belts, one hers and one Panagiotis’, and fasten them around his pajamas.

“That way we’ll never separate and always love each other,” she added. Her jaw seemed to be trembling. When the lights came on again after the Fifth Gospel, and as the nailing of the cross still resounded, I saw how her eyes had filled with tears. “You must believe and you must pray,” she bent down and whispered to me. A gust passed through the three open gates, warmed by the candles, pushing scents, caressing the icons. Then I shut my eyes tight and made a prayer.

“Oh wind, unruffle my mind, oh wind, rid me of this shiver, bring instead a joyful quiver.”

A few days after Easter, Grace left our lives forever, running down the stairs of love not caring if she’d bust her knees. In her wake the house’s temperature fell again. With my fingernail, I could trace a NO onto invisible frozen windowpanes. She took the red dress and its creaky tail with her, and we learned from the neighbors that she was beaten all black and blue again. We wondered whether she’d left us without saying goodbye because she felt ashamed.

I saw her once more 10 years later. It was Holy Week again. My parents didn’t exist anymore and I lived with someone I had sworn to never love. This path of mine was strewn with flowers and razorblades. The taxi driver had looked at me the wrong way from the start because it was close to noon and I was still wearing the previous night’s long black dress. Arriving at a small street in the neighborhood of Kypseli, I discovered I had forgotten my wallet. His eyes lit like lightning, with hate but also with a hidden joy, “I want my money,” he began to shout louder and louder as the crowd gathered. An ivory-faced young woman bent over and asked:

“What does the girl owe?” Grace paid for the cab. Those years, I was never arriving, always leaving, and we only spoke for two seconds. She and Panagiotis had never broken up. After the kids were born, he’d calmed down, he was a good man now, going to church every Sunday. Yes, they had two daughters, little Flame and Maria of the wind. She kissed me and crossed me and for one instant, as her cheek touched mine, it came to me to say, you and your belief in miracles, ask your God to save me, take me from these cold murky waters, tear away these black binds restraining me. Here where I find myself in a razor-sharp eternity, grant me one deep free breath. Tears welled up in her eyes. Her empathy didn’t surprise me, that’s how she was, always ready to lift the weight of the world. Her Grace touched me for a moment and I felt the first sweet promise in the air. Without saying a thing, I left at a near-sprint, and it didn’t matter at all that a world of cheap glimmers was swallowing us, separating us forever.

Jacob Moe is a translator of Modern Greek and Brazilian literature and theater, recipient of a PEN/Heim Translation Fund Grant from PEN American Center, as well as grants from several Greek cultural foundations and a translation fellowship with the Athens Academy. He is currently based in São Paulo, Brazil, where he has been awarded a Fulbright grant in film studies. He is also co-founder and managing director of the Syros International Film Festival.