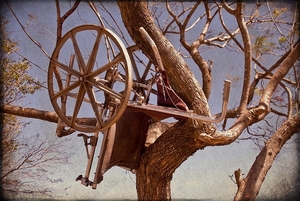 I put on my pink top that says BABY GIRL on the front and I put on different eye makeup because my other eye makeup got messed up from crying. I want to look good in case they got cameras. I put on some red, red lipstick that I’m keeping for Cheri when she comes back, if she does. I had a valentine Mia gave me that I saved up and I stuck that in my fanny pack. I didn’t have nothing from Teddy or Pierre, so I wrote Teddy’s name on my arm and put a heart around it, and I wrote Pierre’s name on my other arm and drew a pencil like the one he stabbed Louie with. It didn’t look like a pencil that much but it was a pencil. I took my chain I had bought at the hardware store and my lock from my locker at Hoover and put ’em in my bag hanging offa my chair, and I got my sign I made from under my bed. Then I went down the elevator and out the door. It was nice outside, kinda warm and sunny, and it felt like that feeling you get when it’s Spring, but it is Spring so I guess that’s why. I rolled out to the middle of the grass right in front of ILLC, but I didn’t see no place good to chain myself to. I always thought there was a tree out here or something but all I see now is two skinny baby trees and a whole lotta bushes. How can you see a place every single day and not know what the hell it looks like? Shit. So I wrapped my chain around and around one of the baby trees and then I wrapped the rest around me and my chair, held up my sign, and waited for the fur to start flying.

Nothing happened for a while.

One thing I didn’t remember to think about is nothing never happens around here. ILLC’s in the middle of nowhere. Some cars drove by, and maybe the drivers looked at me? But they didn’t look at my sign. They just looking at my cleavage or my wheelchair. I hope it’s my cleavage. A truck from the meatpacker place come past and the driver waved and he read my sign but he didn’t give a shit. I started to feel stupid just sitting there holding a sign and chained to a little tree and people driving by and thinking I’m some crazy cripple person.

Then Ricky drove up with more people he picked up from the funeral. First he honked at me, like he was saying hello. Then, the Lord strike me dead if I’m lying, he must have read my sign, because the boy’s mouth just dropped open like someone smacked him in the face.

THIS PLACE ABUSE AND KILL CHILDREN.

Ricky let down the ramp for the straggles from the funeral. Bernard and Fantasia and Mia and Michael Jackson was some of them. After they all got out, they come over to where I was. Ricky and them and a couple other of the inmates came over to me by my tree and the first thing Ricky says is “Did Joanne see this?” And I says, “She gonna be mad?” and Ricky says, “Hell no, she ain’t gonna be mad. But I’m surprised they ain’t had you arrested.”

I’m like, hey, the more, the merrier. Bernard says, “You gon’ get in trouble.”

I says, “That’ll suit me fine.” Even though that was the first time it popped into my mind that I might get my ass into real trouble. Damn.

Fantasia says, “I don’t wanna get in no trouble.”

Bernard says, “I bet Teddy would’ve liked it though.”

I says, “Why you think I’m sitting here for?”

And Bernard wheels over right next to me and puts on his brakes. Fan¬tasia can’t stand for Bernard to do nothing without her so she wheeled over by him and stayed put. Bernard got Fantasia dicknatized. Then Mia say,

“Yessie, what it say? You sign?” Not on account that she can’t read but be¬cause Mia’s blind as a bat.

So I read it off for Mia and she asked Bernard to push her over to sit next to me. She took up my hand and held it real tight.

Pretty soon more people from ILLC came back from the funeral and Dominique and Chris and Jose all said they was gonna stand there with us but they had to first go to the bathroom. That was the last we seen of them.

When Ricky came back from Joanne’s office, he had Joanne, and she al¬most fell out her chair when she saw my sign and she hugged everybody in our line and then she started calling all over the place on her cell phone. She called the place where Teddy’s lawyer is, and she called some other places, and Ricky went to pick up the kids getting out from school at Hoover and to get us some food. I told Joanne to call Jimmie, and Joanne said Jimmie knows we’re out here but she can’t come be with us because she might get fired. I says, “Ain’t you worried about you getting fired?” And she kinda shrugs and just shakes her head no. I says, “And after you done calling Jimmie can you take my picture on your cell phone? I want a picture of me wearing this top all chained to my tree.”