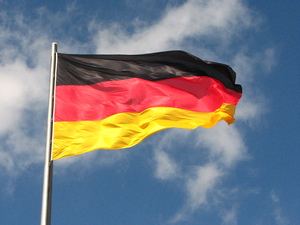 Germanness is translated from the original Bosnian-Croatian-Serbian. The complete translation is forthcoming from Archipelago Books. Read Valentino’s essay on translating Jergović here.

Sarajevo was liberated in April of 1945. A month or two later they came for Opapa to take him to a camp, from which he, like all his compatriots, would later be deported to Germany. He walked the kilometer and a half to the train station in Ilidža, flanked by two Partisans while a third nudged him constantly in the back with his rifle barrel. That man had known him from before the war, and he understood very well who and what Opapa Karlo was, but it made him feel good to mistreat him a little. That’s the way it goes. You never know who will get led off to a concentration camp, when, or why, only that people rarely think it might be them.

But when they got to the station, Opapa’s Serbian neighbors had gathered in front of the livestock cars that the Partisans used to transport their victims to the camps. They said that for four years he had saved them from the Ustaše and even if he was a German a hundred times over they would not give up comrade Karlo, they would go where he was going. The Partisans tried to disperse them, they flared their rifle butts, some people’s heads got bashed in, but the more they struck at them, the more hard headed the people grew.

They returned Karlo to his home that day, and no one ever came again for him, despite the fact that he was a German and was meant to go to Germany with the other Yugoslav Germans. Who knows whether he would have got there alive, which makes it possible to think his life was saved by the same people whose lives he had saved. A good deed was repaid with good, like in a children’s fable. Opapa died several years later, before the decade in which I would be born.

His daughters were not treated as Germans in Yugoslavia because they were married to Slavs. And his only son Rudolf, whom everyone called Nano, except for his sisters and lovers, who called him Rudi, also was not considered as a German and so was not sent to the camps. What were the criteria that motivated the Yugoslav communists when, after the war, they sent Germans to the camps, and what, from their perspective, was needed for a person to be defined as a German? To this very day I don’t have an answer to the question. For instance, our Nano looked more “German” than his father, whose last name he kept, without ever Croatianizing it or adopting a phonological spelling for it. He had a library full of German books, he went to classical music concerts, spoke German with his friends, took walks through Sarajevo’s old Baščaršija bazaar with cousins from Vienna and their beautiful girlfriends, all of them Austrians, and yet he himself was never seen by the Partisans as a German. Why not? Probably because they understood through some sort of policeman’s sixth sense that the Germanness of our family ended with Opapa, and that Rudolf was indifferent to his heritage. That was enough for them to spare a man from a camp, and in this sense the concentration camps of the communists were incompatible with those of the Germans or the Ustaše.

My father and my younger uncle, whose name was Dragan, were mobilized by the Partisans after the liberation of Sarajevo and fought in one of the bloodiest theaters at the end of the war, near Karlovac. They went into the war as high school students who hadn’t yet graduated, and they graduated as demobilized Partisans. After that my uncle studied metallurgy and my father medicine. Both were successful in their specializations and became respected members of society. But both carried family stigmas in their hearts and heads, which went with their names and into their police files. My uncle’s was his kid brother, who had died as a German soldier; my father’s was his mother and her two sisters, who were very active for the Ustaše Youth in Sarajevo—after the war she was sentenced to prison, while her sisters emigrated to Argentina.

They both became members of the Communist League and remained loyal to the membership right up until the fall of Yugoslavia. So did my mother, who at the time of her brother’s death was just a year old. She too would be reminded, on occasion, that her brother was on the wrong side during the war. She felt a little guilty about it. So did her brother. Her future husband, my father, also felt a little guilty, on account of his mother and aunts.

This guilt marked their lives and remained an important part of their identities. I am conscious of it as a part of my own identity, too, though I never had direct contact with it, just as I never directly felt the Germanness of Opapa Karlo or the Sloveneness of my grandpa Franjo. My own case, I understand now, is slightly more complicated, for my identity is to a great extent comprised of what I am not. Perhaps more so than from what I am.

Miljenko Jergovic is a Bosnian-Herzegovnian and Croatian prose writer. As a novelist, he is considered one of the most exciting voices to come out of the South Slav region, and translations of his books have been published by Archipelago books. His poetry awards include the Goran Prize for young poets and the Mak Dizdar Award, and his short story collection received the Erich Maria Remarque Peace Prize.

Russell Scott Valentino has authored two books about Russian literature and translated seven literary works from Italian, Bosnian-Croatian-Serbian, and Russian, including Fulvio Tomizza’s Materada (2000), Carlo Michelstaedter’s Persuasion and Rhetoric (2005), and Predrag Matvejevic’s The Other Venice (2007). His work has appeared in an array of magazines and journals. He served as editor-in-chief at The Iowa Review from 2009 to 2013, and is currently President of the American Literary Translators Association (ALTA), senior editor at Autumn Hill Books, and Professor of Slavic and East European Languages and Cultures at Indiana University.