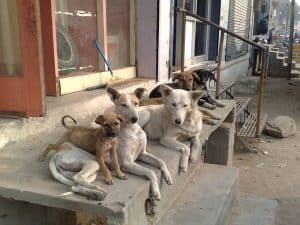 PEN America is thrilled to showcase the work of recipients of the 2017 PEN/Heim Translation Fund Grants. For the next few weeks, we’ll feature excerpts from the winning projects. The fund awards grants of $2,000–$4,000 to promote the publication and reception of translated world literature in English.

Today we feature an excerpt from Dayla Rogers’s grant-winning translation from the Turkish of Wûf by Kemal Varol, a story of ethnic conflict in the voice (so to speak) of Mikasa, a dog who ends up in a shelter after losing both hind legs to a landmine.

Our hero Mikasa is just a pup, cast out by his mother for allowing a human to pet him. He wanders for days on end, seeking food and shelter on the streets of Arkanya, a semi-imaginary town in what we understand to be southeastern Turkey. For a time he sleeps under trucks in the cheese market, but when a bigger dog discovers his hideout, he is forced to hightail it out of there. Thus, he resumes his search for a place where he belongs.

With nowhere to go, I wandered aimlessly for days. To the train station, the cement plant they say was once a liquor factory, the police dormitory, Lake Papaz, and all the way to the bus station I walked and walked, but came across not a crumb of kindness to be my comfort. In the end I latched onto the tail of a pack that, like me, were forced onto the streets and, thus, whetted their teeth against the world.

They called themselves “The Burning Hearts Gang.” Gunsmoke, their leader, was the most intrepid of the four. Despite his name, he was an easygoing dog. He had sense and didn’t go flying off the handle for no reason, knowing better than anyone the right moment to unleash bedlam. It was near impossible to get the best of him. Old Latif, elder of the gang, had gone nearly bald save the curly tufts holding on stubbornly up top. He got the inspiration for the pack’s name from a movie he’d seen.1 He was always telling stories and declaring himself their spiritual leader. His penchant for recounting animal tales earned him the reverence of not only dogs, but all creatures great and small. Even the ants slaving away on the ground dropped their work and listened eagerly whenever he started spinning a yarn. The third dog Mikrob looked more like a hyena and had a smarmy way about him. He was always doling out nicknames, trying to smear the germs from his own onto others. Bolero’s coat was white all along his shoulders, so everyone thought whoever named him must have been inspired by a lady’s outfit. He had a high voice and always minded his manners. Even his barking sounded polite.

The Burning Hearts had made a home for themselves in the town graveyard at the foot of Mount Makam. Apart from Fridays, when the place overflowed with visitors, it was their permanent residence. As if the dead weren’t enough, the people passing the cemetery at night had to whistle twice on account of them.

One day I walked through cemetery’s stone-flanked gate and came eye-to-eye with them. Though I was small as a flea, I didn’t let my size get in the way. I started yapping at them, which made Gunsmoke hoot with laughter from where he lay. Old Latif used his lower lip to blow a curly lock from his eyes, while Bolero wagged his tail excitedly. Mikrob wiped his drool on his chest. They took turns walking to my rear and having a whiff. I flopped to the ground and rolled around, trying to be charming. I licked their faces. Despite the others’ objections, Gunsmoke gave the okay and I joined the pack. I trailed them everywhere, grew up alongside them, and got over the ailment known as childhood by following around a pack of adolescents.

Before that dark hand picked me up and dropped me in the capital, I was a street dog. I had a town full of people and knew very well which to growl at and which to rub up against. The doorsteps where I sought my daily bread, the streets where I barked at every moving thing, the nights when I wagged my tail joyfully, the glimmering sky that covered us all—I had those who loved me, those who hated me, and, most importantly, a pack to bring me up. Five dogs, we roamed the streets, sometimes growling at one another, sometimes having one another’s back.

Every now and then, when the town felt too small, we’d set out on the road, knowing we wouldn’t wander too far. We spent days traveling out of town to Lake Papaz, the foot of Mount Makam, the fruit orchards, and the train station. As we made our way, Old Latif stretched out his role as spiritual leader, going on and on, never shutting up. There was the one about the two taverns whose owners were brothers that up and killed each other. Or the one about the town’s famous musician who climbed this electric pole and tried to kill himself a second time only to botch it up again. Or the one about how a long time ago there was a booze factory and even the dogs got soused off the waste that spewed from it. And so on and so on and yada yada yada. We returned to the cemetery at sunset, Old Latif’s dozens of tales echoing in our ears. Then the night would pick us up and drive us forth into the streets.

Panzer tanks and police cars, their sounds so familiar, were on constant patrol. The police surrounded houses and roughly hauled young people from their sleep into squad cars and off to the station. We lent an ear to the voices of the people watching it all happen and weeping in the wake the young people taken. But when the lights flicked on in panic were turned off again, the streets belonged to us. Beneath the lamplight hitting the asphalt, we wagged our tails contentedly and made the most of the streets—the world—that was ours and would be till sunrise.

Not a peep came from the town. We emerged from one dark street, turned down another and, beneath the orange glow of the street lamps, poked our noses into garbage cans. We returned the barks of far-off brethren. Later we went back to the cemetery, where we pricked up our ears and listened to the distance, lifted our legs to pee on the headstones, and, finally sure our turf was safe from invasion, drifted to sleep.

All was still. The dead stretched out in their graves posed no threat. But on some nights, men with horseshoe mustaches—wearing civilian clothes but carrying walkie-talkies—came with city bulldozers. They opened big pits in the ground and rolled in clusters of bodies, feet clad in brown hiking shoes. Being cemetery dogs, we were more or less familiar with human habits, but for those people no prostrations were made, no blessings or prayers said. The men just filled the ditches and left in a hurry. We had no idea who they were, those kids in tattered clothes, nor did we understand why they were all buried together. According to Old Latif, there was a war not far off, and such things were to be expected. Still, we didn’t worry too much about it. We just ran our noses along the ground, looking for something to eat, wasting no time gobbling up whatever we found.

1. Alevli Kalpler, or “Burning Hearts,” is the Turkish name for the 1954 film Young at Heart starring Doris Day and Frank Sinatra.