By: Valerie Fritsch Translated By: Jamie Lee Searle May 1, 2018 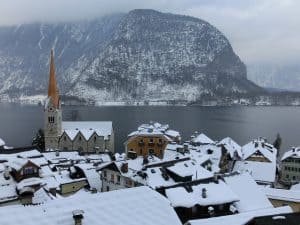 The following is an excerpt from Jamie Lee Searle‘s grant-winning translation of Winter’s Garden by Austrian novelist Valerie Fritsch.

Searle writes: When I read Winter’s Garden for the first time, I was captivated by it, and have remained so ever since. I find Valerie Fritsch’s style hauntingly beautiful and her vision compelling. The story simply refused to leave my mind. Its sensuous images and almost folkloric quality remind me of the work of A. S. Byatt and Jeanette Winterson, and I believe that Fritsch’s prose can go on to inspire writers in English, too. The novella is imaginatively structured, with sparing dialogue that is predominantly concentrated in just one of the chapters. The excerpt presented here is taken from the opening chapter, in which the central character, Anton Winter, is still a child, growing up amongst his extended family in a garden colony. The languid days in the lush garden and expansive farmhouse are deeply evocative of the innocence of childhood, yet the rural idyll is far from saccharine; in such a close community with multiple generations, death is far from being hidden or disguised. The theme of cyclical renewal, of birth and death and rebirth, runs throughout the novel. Flowers bloom, then wither and die with the seasons; storms exert their destructive force; and nature reclaims the land at will. As the story unfolds, the supposed utopia gives way to dystopia, and the reader next encounters Anton as a grown man. He is an aviarist, his home a glass-walled apartment perched atop the tallest high-rise in the city, overlooking the sea. He is a reclusive figure, who silently observes the city below crumbling in on itself as the inevitable yet unexplained “fall” of the world approaches. Despite the intensity of the apocalyptic subject matter, however, the novella is surprisingly uplifting, due to its poetic imagery and Fritsch’s ability to pinpoint the eternally compelling complexities of human existence.

From Chapter 1 | The Garden Colony

Anton Winter, the son of a violinmaker, grew up in an immense garden at a time when it was still possible to be born into a fate. The garden colony had been founded long ago by manufacturers’ sons and naturopaths, by thin-lipped ascetics and a few scholars, by farmers and tall women in straw hats, back after the state dissolved itself and the city became so bleak and mankind so helpless that he had to retreat into nature in search of renewal. The ladies sat amongst the rhubarb plants and raspberry bushes, and the gentlemen leant out of the house windows to pluck fruit from the trees. The children ran naked across land that belonged to everyone, and in the evenings supper was eaten barefoot out on the grass. If, in the beginning, an idea had united this collection of people who were as different as night and day, later on it was the many ideas inspired by the original one that divided them: while some condemned progress, others were reviled by stagnation.

By the time Anton Winter came into the world, the original founding community had long since unravelled and dwindled to become a confusing extended family, the product of past love affairs, who had remained loyal to the garden. They still cultivated one or two fields and tended to the herb garden and orchard, but many worked in the coastal city, a place which, to the children, seemed very far away. Those who couldn’t make a living from farming drove the hour-long journey to the city, day after day, until the mountains shrunk behind them, the meadows turned into a mesh of streets and the uneven ground vanished into restless water. This one-hour drive linked two such contrasting worlds that the city was never spoken of in the garden and the garden never spoken of in the city, as though it wouldn’t be right to do so. The two places existed as parallel universes, one in which there was nothing but earth and mountains, mirrored in the angular faces of its inhabitants, and one in which the tides washed away these very angles and creases. Anton and the other children were kept far from the sea and the city, as though it were feared that the sight of these things could ruin them. And so they and the old folk stayed behind alone in the garden, and had all the time in the world.

Between twenty and thirty people, depending upon the time of day, lived in the vast house and the two buildings alongside it. In the midst of meadows, fields and forests, far from any roads, distant from neighbours, so remote that they were completely out of sight, and bordered by an eccentric garden which melted seamlessly into the surrounding landscape. Already old even when Anton was a child, half farmstead, half estate, with ivy creeping across the yellowed, crumbling facade and the wooden veranda, the large gate, barrel vaults and hipped roof, the main house seemed like it had fallen out of another era, and the life stories of its inhabitants had clung in layers to the walls and land. Everything lived and constantly changed form, came, went, put down roots and disappeared into this beehive. It was an untiring flow of movement, which imprinted itself into the chaos of the house in rhythm with the comings and goings of its inhabitants. The garden seemed to be an allegory of good and evil and all manner of secrets; the old folk sat beneath the magnolias and the children held lily calyces up to their ears and listened into them as though they were gramophones calling them to great adventures. Everything grew and died side by side in this garden, where the people emulated the plants by shifting position in pursuit of the sun, lifting their faces up towards the light, and later, once it became dark, letting them droop in tiredness.

For Anton Winter, childhood was crammed with tall grasses and tea roses and green apples in the trees, which were stared at so covetously all summer long that they eventually began to blush with shyness. The old and sick stayed home, and the sunlight penetrated their papery skin all the way to their skeletons as they sat amongst the bell flowers, as delicate as though they were one of them. Birth still lingered in every bone, so there was no need to fear death. The world showed off with all its might, and the sky raced across tiny heads for so long that they became accustomed to it. When the blooms of the lilac bushes burst open in their thousands overnight, it sounded like a murmur passing through the garden. The children sat amongst the magnolias and thought about nothing, and so everything belonged to them. They sang like birds in the branches of the trees for their great aunts and uncles and for the newborns and little ones, who were laid down next to the old in the meadow shadowed by the edge of the forest. On hair-cutting days they knelt tearfully on a stool, watching the hair as it was cut by mothers with flashing scissors and fell to the floor, while the others stood around them and laughed. Everything had a place in this garden. Nothing was impossible back then. The sky was as far away as the moon. Next to the bee huts, aunts with hats as large as wagon wheels sat drinking hot tea in the sunshine. Their cheeks were as soft as alms loaves, and little lakes formed in them when they laughed. The white nightshirts and burial shrouds waved on the washing lines, and the children slipped beneath the material as it billowed in the wind and pretended to be ghosts. When someone died, everyone stood together in the garden at night and stared heavenwards up at the stars, and it was as though those left behind could see after the dead into the universe, through the fracture made by their parting. They laid their ears to the ground to listen to the deceased, then shuddered a little. Nothing ever smelt more alive than the loose earth of the fresh burial mounds at the edge of the garden, over which the children ran barefoot in summer.

There were raspberries on the burial mounds, which they stuffed greedily into one another’s mouths in an attempt to grow big and strong, and those who had already become so carried their great-grandmothers effortlessly into the house at night as though they were mere bundles of firewood. If one of the children exerted themselves too much playing, they would get glazed eyes and a fever, forcing them into bed while the others continued to run free outside of the window. The children spent entire days roaming around, and no-one was concerned. What could possibly happen out there in the world? It was an unspoken agreement. Beyond the windows began the world, and beyond the fences, a fate awaited. The young sought the paths they wanted to follow with the intensity of those just starting out, and the old walked humbly to the end of ones they had chosen long ago. The children were made of straw when they ran across the summer meadows, and fetuses sleeping in the trees with wooden crowns, as though the forest was raising them, when they rested after having ventured deep inside it. As night drew in, there would be Bundt cake at the house, hot from the oven to warm hands cooled by the day, and soft music drifting out of the corners. The old cradled violins in their laps as though they were children, and played them from time to time on the veranda, cocooned in blankets, with beakers full of apple juice and plates piled high with buttered bread by their sides. Everyone came by in the evening. The mothers rocked the newborns rhythmically, and the fathers threw them joyfully up in the air. When the adults arrived home from the city, the children would come running from all directions. The dogs surrounded the homecomers and licked the blood from their cut knees. Then, in the garden, they would tell one another of their travels and transformations, and soften in the presence of the grandparents’ serenity, while these, in turn, were eager to hear tales of exuberance, until eventually everyone found their peace. Then, even the scolding birds in the trees fell silent, and slept as silently as fruits, their heads resting on their feathers, while the flowers slowly closed and the garden became damp and black with night.