from The Essential Yosano Akiko: The Ripening Years

By: Yosano Akiko Translated By: Janine Beichman May 1, 2018 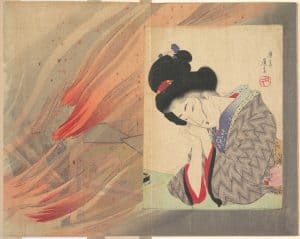 The following is an excerpt from Janine Beichman‘s grant-winning translation of The Essential Yosano Akiko: The Ripening Years by Japanese poet Yosano Akiko.

Beichman writes: Although little known outside Japan, the poet Yosano Akiko (always referred to by her pen name, Akiko) figures large in Japanese cultural memory. Born the sheltered daughter of a sweets-shop owner in provincial Japan, she made herself into one of the giants of prewar modern Japanese literature. My project is translating a curated collection of Yosano Akiko’s poetry from 1904 to 1919, the middle years of her life.

Writing poetry was as natural to Akiko as breathing, and she recorded her thoughts and feelings almost on the fly, in a notation spontaneous, compelling, and sometimes tantalizingly obscure. Her work is incredibly varied, but among the many strands one of the most attractive is the poetry whose genesis is her own feelings about pregnancy and birth, an experience that, as the mother of 13 children, she knew well. In 1911, she gave birth to twins, one of whom was stillborn, and wrote a 27-poem tanka sequence which included the poems below.

from The Essential Yosano Akiko: The Ripening Years

I birthed emptiness, I birthed death
Of these gigantic things I hear
on the border of dream and reality

Into the black sea of death
upside down falls my child
a white phantom
Little hands red with blood, the child died
It peels the skin
from its sleepy mother’s eyes
As if lashed by the whip until it ran
with blood, but still unrepentant

I have returned to life

Through the window glass comes dawn,
like a pale cocoon…
Then something crawls silently
across the maternity room wall,
trailing a faint thread of coral light.
Or so I thought…but no,
it is the early winter sun,
a fragile butterfly, emerging.
Here lies a woman
eight times escaped to return from death —
she is myself, a pale woman,
with my daughter Hélène,
like a wild camellia’s firm bud,
in her fifth day of life,
and a vase of roses
and the pale peach-color butterfly sun,
shy as first love.
Such a silent, pristine dawn!
Noble sun, how I missed you.
I lie down now
like a soldier wounded in battle,
exhausted.
But my newfound joy
is like the belief of sun-worship.
Accept my outstretched hands,
O sun, empress of the dawn!

You know both night and winter,
and for millions of years
with the heroic power of your heavenly flames
have endured infinitudes of deaths
and always returned to life.
I will follow you.
I have returned alive only eight times,
a mere eight times come through

the screams, the blood, death’s darkness.

NOTE: this modern-style poem was written a few days after the birth of her ninth child. The speaker lies in bed, exhausted after giving birth. But as the dawn sun colors the white walls, she revives, and ends by stretching out her hands to the sun, deriving inspiration from its endurance.

DEADLINE EXTENDED! Students have an extra week to apply to PEN America’s Free Speech Advocacy Institute! Don’t miss out on this incredible opportunity to engage with peers & professionals on pivotal issues affecting society today. Apply by Sunday 1/ 23 at http://pen.org/institute.

THE SENTENCES THAT CREATE US: Crafting a Writer’s Life in Prison just launched on @HaymarketBooks with @PENAmerica! A comprehensive resource told through compelling first person essays by @dwaynebetts @MitchSJackson + @Piper, among many others. http://pen.org/sentencesthatcreateus