from Revolt Against the Sun

By: Nazik al-Malaika Translated By: Emily Drumsta May 1, 2018 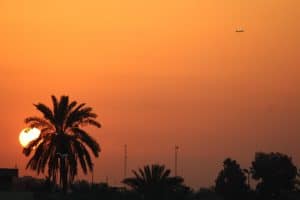 The following is an excerpt from Emily Drumsta‘s grant-winning translation of Revolt Against the Sun: The Selected Poetry and Prose of Nazik al-Malaika by Iraqi poet Nazik al-Malaika.

Drumsta writes: The Iraqi poet Nazik al-Malaika is perhaps best known for the important role she played in the development and spread of Arabic “free verse” (or taf‘ila poetry) in the 1940s and 50s. After laying out the basic parameters of this new poetic form in the preface to her second collection of poetry Fragments and Ash in 1949, she later expanded her discussion of the topic in a critical text titled Issues in Contemporary Poetry (1962). While most of her best known poems, such as “Cholera” and “Of Prayer and Revolution,” appeared in later collections from the 1960s and 70s, the poems I have translated below were published in her first two collections, The Woman in Love with Night (1947) and At the Bottom of the Wave (1949). Critics have generally dismissed these collections as purely Romantic works preoccupied with such topics as melancholy, creative inspiration, and bittersweet beauty. I contend that the poems selected below reveal a much more complex dimension to the earlier half of al-Malaika’s poetic career. Though Revolt Against the Sun, for example, might seem like a typically Romantic meditation on the beauty of the night, the stars, and the power of poetic inspiration, the poet’s use of political terminology (thawrah, “revolution,” tamarrud, “revolt,” etc.) and her insistent, almost defiant tone ask that we read her assumption of the elegiac, nocturnal, and melancholic position (stereotypical for women poets in the Arabic tradition) as a distinctly political act. According to such a reading, “revolting” and “rebelling” against the sun imply the denunciation of male poetic hegemony, and the relegation of women poets to the supposedly monothematic realm of the elegy. Al-Malaika also interacts with and defies tradition by devoting poems like “Elegy for a Woman of No Importance” and “Three Elegies to My Mother” to female figures, whereas premodern women’s elegies were generally devoted to male family members or loved ones. In these poems then, as in others scattered across her seven poetry collections published over the course of a 30-year career, al-Malaika reclaims the (feminized) space of elegy in order to affirm a strong and willful poetic voice.

from Revolt Against the Sun: The Selected Poetry and Prose of Nazik al-Malaika

Elegy for a Woman of No Importance

(or, images from a Baghdad alleyway)

She died, but no lips shook, no cheeks turned white
no doors heard her death tale told and retold,
no blinds were raised for small eyes to behold
the casket as it disappeared from sight.
Only a beggar in the street, consumed
by hunger, heard the echo of her life—
the safe forgetfulness of tombs,
the melancholy of the moon.

Revolt Against the Sun

(a gift to all rebels)

She stood before the sun and said aloud:
“Oh sun, my rebel heart is just like you:
it ran off with the best days of my youth,
its light quenched the stars’ thirst, ever renewed.
Careful—don’t let the sadness in my eyes
or these copious tears deceive your sight.
This sadness is the form of my revolt,
to which the gods bear witness every night.
“Careful, don’t be deceived by my pale skin,
my trembling features or my misery.
If you see helplessness upon my brow
or read it in my lines of poetry,
know that it’s only feelings in my soul
causing this suffering, these tears withheld;
it’s only prophecy that failed to fly,
so it took up this sadness and rebelled.
“My lips are fastened shut over this pain,
my eyes are thirsty for sweet drops of dew,
the evening left its shadow on my brow
and morning’s killed off all my pleas to you.
I came to pour out my uncertainty
in nature, ‘midst sweet fragrances and shadows,
but you, Sun, mocked my sadness and my tears
and laughed, from up above, at all my sorrows.
“Even you, Sun? Source of my misery?
You were the one I gazed at in my dreams,
You were the one whose name I once revered,
singing the praises of your smiling beams.
You were the one I once held sacred and
idolized as a refuge from all pain.
But now, crusher of dreams, melancholy
darkness and shadows are all that remain.
“I will shatter the idols that I built
to you out of my love for radiance
and turn my eyes away from your bright light.
You’re nothing but a ghost, splendor’s pretense.
I’ll build a heaven out of hidden hopes
and live without your luminosity.
We dreamers know that deep within our souls
there lie secrets, a lost eternity.
“Do not spread out your beams over my grove,
you rise for other than my poet’s heart.

Your light no longer stirs feelings in me.
The night stars now inspire all my art.
They are the friends who guard me in the dark,
They understand the passions that ignite
my spirit. Gently, they extend to me
thin, silver threads to guide me through the night.
“The dark is filled with song and poetry
The god of beauty roams to his content.
Here light, unfettered souls flutter about
and spirits hover in the firmament.
How often I have wandered through the dark,
forgetting all these sorrows, all these scars,
upon my lips, a divine melody
recited by a caravan of stars.
“How often I have watched stars as they pass
letting the twilight shape my incantations,
and watched the moon bidding the night goodbye,
and roamed the valleys of imagination.
The silence sends a shiver through my spine
beneath the evening’s dome, so still and dark,
Light dances, painting on my eyelids with
The dreamy palette of a hopeful heart.
“And as for you, oh sun… what can I say?
What can my passion hope to find in you?
Don’t be surprised that I’m in love with dark,
Mistress of cruel flames that melt us through.
You rend our dreams before they can appear,
You decimate what we build in the dark,
You shatter visions of utopia,
and break the silence in a poet’s heart.
“Your dancing lights combined look pale, oh Sun,
compared to my resistance and its fire.
Your light cannot banish my melody
so long as my hands grasp this singing lyre.
If you should flood the earth, remember this:
My temple has no room for your cruel light
I aim to bury the past you revealed
And live beneath the canopy of night.”

THREE ELEGIES FOR MY MOTHER

For those who are happy, poetry may seem like an enticing luxury for the mind. For those who are sad, however, poetry becomes a way of life. In the following poems, I attempt to mourn my mother, whose tragic death caused me a good deal of suffering. There was no other outlet for my pain; I had to love it and sing to it.

We left our dearest treasure here,
then hurried back after a spell
and searched for it both far and near,
but found nothing behind the hill.
We stopped to ask a forest hill
and whispered in the cypress’ ear:
the first said that she’d never tell,
the last pretended not to hear.
But dawn sustained us with her light
and showed us, in the treasure’s place,
a flower: black, as dark as night,
watered with tears, showing her face.
When visited by morning winds,
she fills the air with melody,
and hides inside her quiet hymns
the tears of all humanity.
She is our sad and sleepy flower:
her black petals hold our past.
We cried for her, then carried her
with memory, then left at last.

The Woman in Love with Night

You shadows of the night who hide our hearts’ secrets,
Look at this pale ghost wandering, have you not seen it yet?
Like a strange apparition come to roam beneath your screen,
Carrying an oud in its right hand, it sings to the unseen,
Unbothered by night’s stillness in the valleys of regret.

It is a girl, o night, who wanders through your meadows,
Her two eyes overflowing as you cover her with shadows.
She’s going to the valley carrying her songs of grief,
If only your horizons knew what she sings on that lyre,
If only you, black night, knew the extent of her desire.

Seducing her with dark and stillness, nighttime drove her mad.
Silence—that sweet temptation—restored the youth she once had.
She shed the coldness of a day whose path was wrapped in yearning,
And moved through the world like a ghost with sadness in her heart,
Sobs emanating from the oud, moans emanating from the dark.

Woman in love with night and all its lush ravines,
This is the night: divine echoes, visions in blues and greens.
You’re nothing but a gloomy sigh when the world’s laughter rings,
So pick up your oud from the grass, and hold it close, and sing,
Describe night’s sweetness, beauty, how it enchants everything.

What is it, perplexed poet, that attracts you to the night?
Is it the ardent, youthful dreams, the poets’ second sight?
Is it plunging yourself into what we know nothing of?
Or are the magic lights on the horizon what you love?
How strange, lyre of the evening, poet of the dark’s delights!

Your specter wanders through a cloud, pale-colored and sublime,
It roams through this space dreamily, wrapped in a cloak of night.
Woman in love with shadows, night is full of mystery
Poet! You know that broken hearts have never shown mercy.
Go back—you’ll get no answers from these stormy bolts of light.

Oh poet of perplexity, what has made you so numb?
Why do you stand there dreaming like a ghost beneath the palms?
Resting your head in your two hands, with shadows all around,
As though in thought, in sadness, and in silence you had drowned,
Unaware of temptations laying low in fields of calm.

Listen! This is the thunder crying out, these are the storms.
Go back, you’ll never understand this secret’s many forms.
We don’t know what it means, life has withheld its mysteries,
The raging storm is mad, my girl. It knows not what it sees.
Have mercy on your heart, for these shadows will never speak.