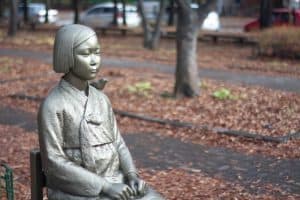 The following is an excerpt from Bruce and Ju-Chan Fulton‘s grant-winning translation of One Left by Korean novelist Sum (Soom) Kim.

The Fultons write: During World War II, an estimated 200,000 Korean girls were forced into sexual servitude for the Japanese military. The average age of these girls was 16, and some were as young as 12. They served an estimated 15 to 50 men a day. Only 20,000 of these “comfort women” are thought to have survived and made it back to Korea after the war. It was not until the early 1990s, almost 50 years after the war’s end, did these women begin to make public their background as sex slaves for the Japanese military. To date, only 238 have done so. Every Wednesday since then, surviving Korean comfort women have demonstrated silently before the Japanese embassy in Seoul, the capital of South Korea, demanding that the Japanese government acknowledge the forced drafting of these women into sexual servitude and offer a formal apology. Their demands have yet to be met.

As of October 2017, only 37 of the original 238 self-declared Korean comfort women were still alive. Their average age is 91. Following her research of the oral histories and other documentation she studied, author Kim Sum was convinced that although Koreans knew about the existence of comfort women, they did not adequately understand the extent of their hardships both during their years of sexual servitude and the subsequent decades of self-imposed and culturally encouraged silence. It is the lives of the survivors among these women that form the basis of her novel Han myŏng (literally “one person,” in our translation One Left), the first Korean novel devoted exclusively to this subject.

Rather than confine her readers to the protagonist’s memories of the horrors of her life as a comfort woman, Kim establishes narrative distance by keeping the protagonist of the present outside and in motion, allowing us to share with her the memories that surface from what she sees and hears and those whom she meets in her immediate environment—a bleak neighborhood of alleys emptied of residents who have moved out in anticipation of redevelopment. The author explores many of the experiences of actual comfort women in the person of the protagonist, citing in 316 endnotes the sources of many of the details mentioned by the protagonist as she returns in her memory to the “comfort station” in Manchuria.

The last one is out of her coma. For three weeks she recognized no one. She speaks in a labored, halting tone: “I can’t die—not when I think there won’t be anyone after me to speak . . .”

The last one spends practically the whole day connected to an oxygen machine. She herself feels pained but proud to see the last one without her oxygen mask, managing to utter one word and then the next, stitching the words together in an attempt to tell the world who she is. Standing next to the last one is a caretaker who observes her with concern.

“I am not a comfort woman.”

“I am Yun Kŭmshil, a living witness to history.”

The woman stares straight ahead as if she’s being photographed for a passport.

“I want to be happy until the very end.”

As she sits in front of the mirror, slowly combing her hair, she mumbles to herself, “Me too, I want to be happy.”

It’s the first time she’s ever thought about wanting to live happily. The first time in her nearly century-long life.

Even if it’s just a single day.

She reaches toward the mirror.

And passes her hand across the image of a face she feels belongs to someone else.

She used to think, before she turned twenty, that her life was over, she had no future.

As she’s wiping the floor with a rag, the television and the fluorescent light go out. She takes a candle and matches from the drawer of the television stand. She strikes a match, brings the flame to the wick, and the instant the candle lights she recalls the girl from the neighborhood.

The girl’s face comes to mind lighting-like and just as quickly is gone, but she feels that in that brief instant she’s said a prayer for her.

No need to bother with the circuit breaker. Instead, by the light of the candle she passes her fingers back and forth across the lower part of the mask, where the mouth should be.

She takes her nail clipper and brings its tiny file to the mask.

With the tip of the file she draws a line where the mouth should be. She traces the line, traces it again and again, and some fifty tries later an opening appears. There.

Relentlessly she widens the mouth, the tip of the nail file going back and forth, the opening growing almost imperceptibly. She stops when the hole is big enough for her tongue to go through.

She puts the mask over her face.

She’s been out on the veranda all day. Just in case the man from the precinct office stops by.

There’s something she must tell him.

The banging on the gate awakens her. Her head jerks up and her eyes open toward the gate.

The yard and veranda are full of light and the mask resting in her lap has taken on a peculiar gleam. The mouth hole she cut out with the tip of the nail file flickers in the light.

A man’s head is sticking up above the gate, but with the sun at his back his facial features are blurred. It has to be the precinct office man, she tells herself—she has a hunch he’ll drop by, but in addition he’s the only one who drops by without advance notice, except the meter man, and the meter man came by two days ago.

She swallows heavily, then mechanically utters the words she’s prepared: “You know . . . I live here . . .”

“What!” There’s a touch of irritation to the voice.

She’s in no mood to open the gate. She doesn’t want to let the precinct office man inside.

Stubbornly she holds her position, as if fixed by a spike to the veranda’s wood floor.

The man shakes the gate in exasperation.

She tries to restrain her racing heart, and when she’s regained her composure she says yet again, “This where I live.”

What? It’s not the city guy?

She isn’t inclined to let her nephew in either, but she can’t just sit there. She gets up, but in the process, the mask falls to the floor.

Instead of moving toward the gate she plops herself back down on the veranda. Clutching her skirt with both hands, she tries to make herself as small as possible.

She imagines the rattling of the gate echoing throughout the neighborhood.

No one can force her out from this house, she tells herself. Not the city guy, not her nephew from P’yŏngt’aek, not the owner she’s never seen.

The ancestral home she wanted to return to at least in spirit was still there, but not for her.

But not long ago this Western-style house–in which she has never officially resided–began to feel like the home to which she so longed to return.

She doesn’t want to be sent out of a home to which she returned after well over seventy years.

Seeing that she’s unwilling to open the gate, her nephew climbs over the wall. He strides toward where she’s planted herself on the veranda. His hiking boots tromping on the mask, he grabs her shoulders and shakes her.

The mask with the mouth she labored to create last night lies mercilessly crushed beneath his foot.

As she gazes vacantly at the seeds she collected last fall from a vacant home, she’s struck by the realization that she is not alone but instead is surrounded by all of creation—the sky, the earth, the air, light, wind, water, seeds, and so much more.

And yet she feels even more alone.

She picks up a seed.

She eyes it intently until she can almost see the tiny thing sucking her up. Once inside the pore-size seed she will never be found.

Once on television she saw images of the earth as seen from outer space. She knows the earth is round, but round like what? A baby pumpkin? An egg? An apple? A bead? And she wondered what color she could call it? The images she saw on television were not a single color but an indistinct blend of white, blue, orange, and green.

She held her breath and watched, and before she knew it her face was inches from the screen as she wondered where all the houses were, and the people, and the birds on a wing.

It occurs to her that the earth is like a seed. And inside this seed called Earth there is water, there is land, and there are trees. Birds are flying, rabbits are nibbling grass, moles are tunneling, horses are jumping, and ants are marching.

To her the inside of the seed called Earth is beautiful and yet ugly.

Is it the same inside a cockscomb seed, beautiful and yet ugly?

She’s heard that if you want to go beyond the earth’s atmosphere you have to move incredibly fast, like the speed of light.

She feels that if she were to go outside herself she would need to travel faster than a spaceship leaving the earth’s atmosphere.

Strolling in the alley, she flinches. Something reddish is wrapped around the metal handle of the gate. Her first thought is that it looks like a scorched hand hanging from the handle. She feels her hair standing on end as she inches closer. It’s a mesh bag. But there’s no kitten inside. The mesh bags she comes across in the alleys invariable contain a kitten.

She walks up to the gate and puts her face so close to the bag she feels like the bag is forming a noose around her neck. She wonders if there actually is a kitten in the bag and her eyesight is so bad that she can’t see it.

But if someone set it free, then who could it be?