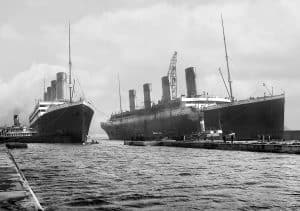 Today we feature an excerpt from Christopher Tamigi’s grant-winning translation of In Your Name, a novel by Slavic author Mauro Covacich. The translation explores ethnic conflict, post-communism outcomes in Eastern and Western Europe, and immigration in contemporary Italy.

Tamigi writes: The first half of In Your Name is a work of autofiction: The narrator and protagonist is a writer named Mauro Covacich, and the story comingles fictional elements with events from the author’s life. Covacich is invited to participate in a cultural goodwill tour of the eastern Adriatic, organized by the government, to celebrate the Italian language. At each port of call, Covacich will exhibit his latest work, a “video novel” also called L’umiliazione delle stelle (The Humiliation of the Stars), which shows him running a marathon on a treadmill hooked up to equipment measuring his vital signs. This is a real-life project that Covacich completed in 2010, inspired in part by the art of Marina Abramovic.

The story takes a sharp turn toward the fictional, however, when Covacich boards the military vessel that is to ferry them between ports and discovers a beautiful young woman of color, Angela, hiding “half naked” in his cabin. He first assumes she must be a clandestine immigrant although she speaks perfect Italian. In the cramped space of the cabin, the two exchange confidences and develop a sexual relationship that evolves into an odd literary collaboration when Angela reveals she is an aspiring writer. She asks Covacich, who has given up on publishing, to help her write a novel, which somehow becomes a history of his own family.

One of In Your Name’s central themes is the author’s struggle to communicate his genuine identity to the reader/audience. This is the motivation behind the video installation, where he puts his physical body on display free of artifice. But we also see an attempt to convey a different type of identity in the family chronicle that unfolds through the narrator’s collaboration with Angela. This includes anecdotes about his grandparents, three of whom migrated to Trieste from former Yugoslavia, which are among the most poetic, comical, and historically enlightening passages in the novel. The following excerpt is about Grandma Giovanna.

The road slopes downward behind that crest of pines. Now it’s paved in asphalt—on the corner there’s even the local appreciation stall with postcards, a list of prices, a cooler—but at the time it was little more than a dirt trail. Rocks and dust the color of talcum powder that curved toward the town between two hemispheres of pine forest. It is 11 in the morning on July 12, 1944. The cicadas sing wildly from the blackberry bushes while the wind rising from the sea pushes the perfume of resin out of the pinewood almost as far as the threshold of the first houses. It would be a serious mistake to think the landscape is bereft of human presence. There are men there, and how: They’re all there, hidden behind the trees. Two squads, waiting on the two sides of the woods. But it’s not a game; it’s the one battle that will be fought in Vrsar. The battle of the indomitable Fascist resistance—or—the battle for the liberation of the Yugoslavian people.

No one wears a uniform, neither the blackshirts nor the latest acolytes of Josip Broz’s brigade. There are only smocks that flicker in the sun like the plumage of swans, swelled by the wind at their sides and between their straps, bleached at the same washhouse. On one side we recognize Ucio, Menego, Righutti’s son the accountant, and Nino, one of Angelo’s five brothers. (He, we know, is quartered in Pula, engaged in what we’ll call extracurricular activities with the local citizenry.) On the other side, there’s a pair of former quarry workers, people like Uncle Teodoro, Italians ready to accept the Socialist Internationale. They will learn Serbo-Croatian in obligatory evening classes, they will hurry to find juska1 wives, they won’t speak Italian anymore except in some resentful letters to relatives who’ve fled to Italy, but they will be singled out as spies for a long time to come. One will begin a party career. He will become a school inspector, showing the world the pluralism and respect for minorities on the part of the new federal government. But now it’s only 11 in the morning on July 12, 1944, and the only thing that’s certain on this dusty road in Istria is that the brigade’s commander has given the order that everyone was waiting for: Fire!

At more or less the same instant, as if she were the true victim of the ambush, Giovanna comes around the corner. Shortly afterward her daughters emerge, Edda and Gemma. They’ve set off early with pasta e fagioli for their uncles working at the quarry. By now the business has gone bankrupt; no one has the money anymore to build the tombs of times gone by. The stonecutters no longer serve any purpose, but the rules are still the same: The men go off to work, the women bring them lunch. No one in town has died yet on account of the war; it seems like the first names on the list will be those of a mother and her two little girls.

At the sound of the first gunshots, Giovanna throws herself to the ground, pulling Edda and Gemma under her bosom. They don’t even manage to scream in fear. Even the cicadas are quiet. There’s an unreal silence on the road, if one excludes the whizzing of the bullets that travel visibly, like the stones of a slingshot, from one side of the woods to the other. Death hisses in the ears of the three immobile figures, who’ve lost their individual features in a pile of rags under which they gasp like one big lung. One girl 10 years old, the other five, their mother 38. Which projectile will kill them? One produced in Gardone Val Trompia or one produced in the glorious factories of the Soviet Union? The partisans and the Fascists shoot blindly with their slow semi-automatic rifles; they fight lying prone in the grass waiting for something to happen, for another phase of the battle to unfold in which it’ll become known who won and who must surrender. But instead nothing unfolds, and one can’t even hear the screams and curses of the wounded–just the whizzing of bullets shot by the two squads of men who are all still unscathed. Ptzíum! Ptzíum! Balls of lead that fly by almost without any arc at all. With a little effort, it’s possible to imagine the lattice of trajectories hanging over the head of the woman and her two girls. Giovanna will bring to light a third—Lina—five years from now. They will escape to Trieste in a big boat. She will eat crabs while sitting on a wooden crate. She will wash the steps of the elegant little buildings in the San Vito neighborhood. She will bury her husband, her son-in-law, all her compatriots from Via Umago. She will also outlive her much-adored Polish pope. She will see the year 2000, the beginning of science fiction, and then in 2010 she will reach the age of 100 and live still longer, until she becomes a frail tree curved over the side of an armchair. All this will come to pass, but Giovanna is convinced she’ll die now. It’s an incorrect conviction out of which, miraculously, the necessary cry escapes. “Help!” she screams, her voice still unsure, held in the asthmatic vice of terror. And then louder, “Help!”

The first courageous men stand up and see, down there, Giovanna’s raised hand. “Stop!” a partisan shouts. “Stop! Cease fire! Angelo’s wife is there with the putele!” The gunfire stops suddenly. Nino climbs down to the road. He gathers his nieces and sister-in-law and walks them home.

1. In Istrian dialect, and even more frequently in Triestino, a pejorative term for a Yugoslavian woman.