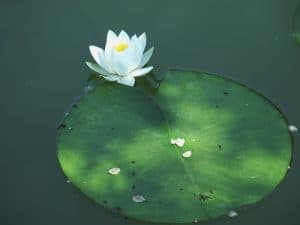 Today we feature an excerpt from Nick Admussen’s grant-winning translation of Floral Mutter by contemporary Sichuanese poet Ya Shi.

Admussen writes: Ya Shi, born in 1966 in a village commune in Sichuan province, is the author of six collections of poetry, the editor of the unofficial journal Poetry Mirror, a winner of the prestigious Liu Li’an prize, and a prolific blogger and literary critic. These achievements, however, don’t do much to describe his uniqueness and independence in today’s Chinese literary scene. Having entered Beijing University shortly after the end of its suspension during the Cultural Revolution, Ya Shi brought one of his generation’s first baccalaureates in mathematics back to Sichuan province, where he still teaches university courses in math. He has consistently eschewed the literary world’s centers of gravity in Beijing and Shanghai and is as likely to reach readers directly through the internet as he is through his many publications.

Ya Shi’s independent spirit is omnipresent in his poetic production. Anti-romantic, rooted in the body and its practical, ethical relationships to its social and natural environments, he patiently crafts his verse into a set of offerings, active poetry intended not simply to describe, but to transform. When he reads his poems in the original, he does so in his rich, musical Sichuan dialect, tying a thread through the trials of modernity and postmodernity, his broad reading in world literature (“Years,” below, is from a long series of sonnets introduced with a line by Hölderlin), his experience across China, and his centuries-old local language. The result is a “natural and fluent courtesy,” a capaciousness, an open invitation. I’m deeply grateful to be able to respond to that invitation, and to share it here with you.

listen to the insects outside the stone house approach and recede

covering the beetle crackle that will become blossoms on leaves

having been backhanded daily by the mountain wind

this stone house is dimming in color and growing calm.

Something will scuttle across the humming roof

have they ever appreciated the valley’s unbroken looping?

as when sweet mountain spring water churns in the belly

You say you are water which will drown me.

You say: all things were once water.

The low light is wordless, spring wind ruffles the flag,

I truly wish it were true, to disappear just like this,

no bones no flesh no breath, gone…

Look — the murderer is driving an autobus,

the ducks and geese dodging before they can caw in alarm,

Be all that as it may, here,

on my body, there is mystical and uncivilized terrain —

growing thickly over you, pandering to you, shattering you.

Actually, as I text you repeatedly,

I think back to last night, which is still warm,

huge moon, wisps of blue mist outside the window,

lying on a sofa that nobody had sat on all day,

like floating on the surface of silent and glowing water.

I was reading a book slowly, regarding the conversation,

it had the form of a mallow flower backlit by moonlight.