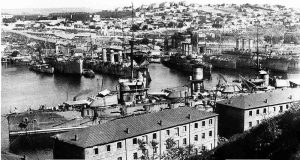 Chernetsky writes: The Euromaidan Revolution of 2013-2014 and the subsequent crisis brought Ukraine to the front pages of global media. As citizens of Ukraine sought to understand better who they were, Ukraine’s most important literary event during the first year after the Euromaidan was the release of Sophia Andrukhovych’s Felix Austria. It has since won multiple awards and has been published in German, Hungarian, and Polish.

The success of this historical novel set in the Habsburg-ruled part of Ukraine during the year 1900 may at first seem puzzling. Yet this book resonated with readers by simultaneously highlighting and subverting what for many Ukrainians became the most important earlier example of a multicultural tolerant society on at least part of Ukraine’s territory—the final decades of Habsburg rule in Ukraine’s region of Galicia.

Felix Austria offers an in-depth historical panorama built from the ground up. The narrative is in the first person, by a character that the reader soon realizes struggles with psychological and mental health problems that are alternatively masked and exacerbated by her intellectual proclivities. Stefania is an ethnic Ukrainian of working-class background, adopted by an ethnically German doctor after her parents and his own wife perish in a catastrophic fire that wiped out a large quarter of their native city, Stanyslaviv. In the year 1900, when the novel is set, she is the housekeeper for an upwardly mobile middle-class family. Through Stefania’s eyes we follow one year in the life of a small city in a backwater corner of Europe on the cusp of modernity; the world we come to know is simultaneously hermetically sealed and incredibly diverse, a melting pot of ethnicities, languages, and religions. While at first seeming to be stable, prosperous, and self-assured, this world contains the seeds of its own unraveling. As recent social changes led us to a renewed appreciation of the fragility of social institutions, this novel is sure to resonate with English-language readers as well.

There is no peace in this house.

This is especially true during the winter holiday season. One party after another: the technologists’ ball at the theater auditorium, the first “woolen” party at the Moniuszko Music Society, an academic soiree at the casino, a costumed ball organized by the local branch of the Sokol Society, and on and on it goes for two more months. On St. Sylvester Day at the city casino, disappointingly, there were only 28 couples dancing the first quadrille. However, there were lots of guests at the Star and at the Urban Society. They say our Jews also had a good time at their club. As always, they elected Esther Funkelstein, the doctor’s wife, queen of the ball—and rightly so: When Mrs. Funkelstein passes down the street, imposing and tall, nobody can prevent themselves from turning, stopping, and casting a glance as she walks away; and then she won’t leave your thoughts, just like a sad tune.

Adela likes partying in large company, and she keeps dragging me along. I wouldn’t have gone, for I know well how these young ladies in zephyr dresses whisper behind Adela’s back, “Adela Anger comes to parties with her maidservant, and she married a Ukrainian coffin maker!” But Petro never accompanies her, and how could I let her go all by herself?

Petro is not a coffin maker. He makes statues for headstones. And all these young ladies shed cascades of tears till their noses turn blue when they see at the cemetery Petro’s mournful angels or marble maidens with flowing unbraided hair who have grown forever cold.

Petro works in Casimir Bebnowicz’s workshop in Sapiezynska St., across from the steeply rising Lutheran church. Just where a poplar alley leads to the cemetery.

But now he is completing marble works in our cathedral: In the main nave the marble is dark green; in the side naves, cream-colored. He says the iconostasis has already been painted and gilded. That they will put in gas lighting.

I bring him lunches there daily: blood sausage with kasha, smoked corned beef, beans, liver dumplings, potato pancakes, pea croquettes. They have done a poor job clearing the streets from snow, and the droshky can get stuck in snowdrifts easily. It starts getting dark soon after three o’clock, but the lamplighter is in no rush to light the street lamps. At every step there are crowds of young guys animated by booze. Our city liquor monopoly made them an unheard-of holiday present: A liter costs only 66 cents. This amount of money won’t get you enough to eat, but you can get so much to drink that not only will you forget hunger—you also won’t be able to recall your own name.

And then they don’t know what to do with themselves. Last night one of them walked under people’s windows, screaming demands that people let him in for the night. He shouted, “I have nowhere to sleep, my feet are freezing.” And finally he found where to warm them: The police picked him up, so he had to warm himself under arrest.

Lately there are so many thieves, swindlers, brigands that it is scary even to go out into the street. You feel like barricading inside the house and not even poking your nose out. And sometimes you think: Who said it was safe inside the house? Who said that here too there wasn’t a bandit waiting—someone to whom you expose your defenseless neck?

Petro says there is news that an ancient ostensory disappeared from St. Anne’s Catholic Church in Ozeriany. Again, no traces and witnesses, all doors latched and locked, windows intact, everything appears in proper order inside. It is as if radiant angels came down through the walls and took the precious object to Heaven to praise Jesus with its help.

This has been going on for a while: In Mykulyntsi, where they had just rebuilt the church after a fire, two golden patens dissolved into thin air: one of them depicting the cradle in Bethlehem, the other the Holy Sepulcher. Just the day before the priest and the deacon secretly hid the platters in an ironbound trunk. In the morning the deacon broke down screaming: The trunk is open and empty; the only key had been with the priest; both are now in prison.

In the Basilian Fathers’ monastery of the Exaltation of the Holy Cross in Buchach, on Mt. Fedir, it was like this. The novice Benedict was walking at three in the morning from his cell located in the building adjacent to the church on the right—he was on his way to feed the horses in the stables—and he heard through the walls decorated with pilasters with gilded Corinthian capitals the wings of angels rustling beyond the eighteenth-century tempera religious paintings. He did not doubt the nature of those sounds for a moment. It was like the pigeons in the belfry, Benedict said, only the size of the birds had to equal human.

In the morning they discovered that a lock of hair from the severed head of John the Baptist vanished without a trace, as did the relics of St. Munditia, a needle from the Crown of Thorns, and a piece of the sponge with which they gave Jesus the vinegar to drink. All these priceless divine objects vanished together with a golden chest encrusted with precious stones.

Rabbi David Moshe, founder of the Society for the Study of the Torah in Chortkiv, reported the disappearance, from the secret hiding place in the Old Synagogue, of a silver sugar bowl on curved feet, decorated with vegetal patterns, which was used for storing the etrog for Sukkot. True, something else was inside it at the time, but this, according to the Rabbi, was a secret that could not be divulged at any circumstances.

When from the synagogue in Brody, the famed city of open doors and of the great Baal Shem Tov, disappeared an old Kiddush cup, a chanukiah with a walking golden lion, and an emerald-decorated yad, someone suddenly recalled a pantomime performed by the wandering Brodensingers that recounted how the Lord of Sabaoth transferred to Heavenly Jerusalem His people: first the belongings, then the temples, animals, dwellings, surprising earthbound people with unexplained disappearances. Then the holy men, wise men, musicians, children disappear too, until not a single Jew stays behind on this sinful earth.

All these terrifying events definitely signal that our world is living its final moments. Someone Unimaginably Boundless will now take a deep breath, languidly stretch the limbs—and wake up. That very same moment, all of us, with our evil eyes and drafty rooms, with our fears, yelps, passions, and tears, shall be no more. We shall dissolve in the sky like black suffocating smoke of a house on fire.

In order not to think about this, people preoccupy themselves with other thoughts—for example, about the holidays. And cannot keep calm.

Adela dragged me to a concert by the sweet young Raoul Koczalski. He is not yet 15, but the piano keys just melt under his fingers—it seems he operates the instrument with the help of his gaze, the power of thought, a nod of his head. The way I operate a cabbage slicer when I make sauerkraut with caraway seeds.

Raoul is a dark-blond youth with a round face, radiant eyes, chubby rosy cheeks. It seems that mustache has not yet begun to sprout on his face. You feel like pinching him. This is what I whispered to Adela when he came out to the hall for the first bow—and she rolled her eyes and painfully jabbed me in the ribs with her deft sharp elbow.

But then, when this child touched with his waxy flexible fingers the toothy maw of the piano, I became ashamed. First he played Mozart, Gluck, and Hummel, only then Chopin’s waltzes and Fantasie-Impromptu—and I felt so ill, so out of sorts because of those sounds, as if I had no right to be there and hear them: I, so insignificant, and they, far too beautiful.

Oh no, now it was not so funny for me that at the age of seven Raoul Koczalski won the prize of the Paris Music Academy, that at the age of eight he wrote his first opera, that at the age of eleven he played his one thousandth recital, and at the age of 12 performed in front of Naser al-Din, the shah of Persia, who before his death from the hands of the assassins had the opportunity to delight in the boy’s talent and even bestow on him the title of Court Pianist and decorate him with the Order of the Lion and the Sun. The sultan of Turkey and the king of Spain also granted the child honorific titles. And how could I now sit so close to him, this chubby blond Lion and Sun, and listen to his music?

There are far, far too many holidays during the winter season.