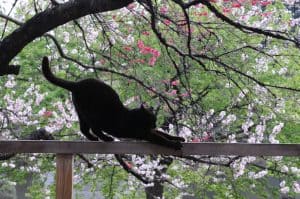 Today we feature an excerpt from Kaitlin Rees’s grant-winning translation from the Vietnamese of A Parade by Nhã Thuyên, a poetry collection that introduces a compelling new Vietnamese voice.

Rees writes: The central figure of this piece is someone, a man from nowhere, who wakes up with a question, and because there occurs a wind, the question slips from his mind into the void. In the end he survives. The piece is composed with the materials of a narrative: There is something occurring, yet a narrative cannot be easily located, “cannot be detached” enough to be told. Perhaps the central figure then is not the man but the occurring itself, the everything of a moment: its numbers, images, imaginings, undulations, memories, thoughts, stray words, and weather. In carefully attending to one moment, its “ephemeral endlessness,” perhaps we can sense a new possibility for non(sensing) the world.

I choose to translate Nhã Thuyên’s writing. I choose to translate Nhã Thuyên, the living person, because her writing refuses all comforts while continuing to ceaselessly (excessively) care for language, and because her living person is the most actively hopeful expression of nihilism, or nihilistic expression of hope, I have ever encountered. Nhã Thuyên’s writing, like her living, maintains a level of mental independence that is truly rare, and yet it opens to others, to strangers, maybe even to you, with an intimacy of sharing in the dark and very quiet rooms of a self. The writings, the person, embody a resistance that is not satisfied with the language of resistance, maybe as “I love you” is never really enough. I chose to translate the writing and the person simply because I cannot imagine a more meaningful way to waste my life.