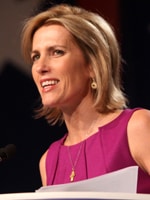 Position within the Trump Administration: Ingraham is being considered for Press Secretary

Ingraham is an American radio talk show host, author, and conservative political commentator. Her talk show, The Laura Ingraham Show, is nationally syndicated and airs throughout the United States on Courtside Entertainment. Ingraham works on Fox News Channel’s The O’Reilly Factor and is a contributor on This Week on ABC. In the late 1980s, Ingraham worked as a speechwriter in the Ronald Reagan administration for the Domestic Policy Advisor and clerked for U.S. Supreme Court Justice Clarence Thomas.

Ingraham is against same-sex marriage and was a supporter of Trump’s proposal to ban Muslims from entering the U.S. during the campaign. “I would say it’s not broad enough,” Ingraham said on her radio show in December of 2015.

Ingraham has maintained a steady out put of pro-Trump rhetoric throughout the 2016 election cycle:

According to Politico, she wants a “bigger title,” with a role in policymaking and a seat at the decision-making table with the president.