Four Questions for Sawako Nakayasu, Winner of the 2016 PEN Award for Poetry in Translation 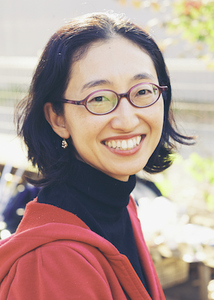 Sawako Nakayasu is the 2016 recipient of the PEN Award for Poetry in Translation, for a book-length translation of poetry into English published in 2015. The Collected Poems of Chika Sagawa is translated from the Japanese and published by Canarium Books.

Sawako Nakayasu: I first heard about Chika Sagawa as a very brief mention in the introduction to Shredding the Tapestry of Meaning, John Solt’s tremendous book about the poet Kitasono Katue (Katsue in standard romanization; Katue was the author’s own preference). Solt named a handful of other writers he might have chosen to study, Sagawa being one of them. I was curious, so I googled her and found some of her poems typed up on the blog of a teenage girl. (At least I thought it was a teenage girl. Looking back, I no longer have any evidence that it was.) I loved the poems immediately, and was amazed that they had been written so long ago.

Around the same time, a couple of fortuitous things happened: I received a JUSFC Creative Artists Program fellowship, which allowed me to spend time in Japan. E. Tracy Grinnell, the editor of Litmus Press, invited me to guest-edit a Japan feature for Aufgabe, a journal of poetry, poetics, and translation. It was all perfect timing—and so I got to work, even though I hadn’t had too much experience translating poetry yet. First, I had to make sure I was translating from a legitimate source though, and located just one copy in Tokyo, at the Waseda University library. I didn’t know at the time that I would translate the whole thing; I was just starting out with some selections for journals.

Nakayasu: It took me over 10 years, from start to finish. Though of course it wasn’t all Sagawa all the time—the Takashi Hiraide book, the Ayane Kawata book, and the Four From Japan anthology were all started and completed during this time span too, along with two books of my own poetry—so I was growing as a translator and as a poet all that while.

The Sagawa book presented a special challenge, which was that the Modernist sensibility and language, especially in this particular Japanese context, was unlike anything I had ever seen, and had no immediate parallel in English-language literature. I could identify certain aspects of it: influences of Surrealism as it was imported to Japan; a painterly, Cubist approach to composition; the tension between the nature-lush Hokkaido of her upbringing and the cosmopolitan Tokyo she had moved to; various writers who she herself had translated—Mina Loy, James Joyce, Virginia Woolf, to name a few; but even on top of all this, in the midst of many other poets who were working with similar interests, Sagawa had quite a unique sensibility, and it took me some time to get closer to her style. It also helped that I was working on an anthology of Modernist Japanese poetry with the translator and poet Eric Selland, a project that gave me a wider perspective on her work than I otherwise could have had.

Nakayasu: It seems that every translation I’ve undertaken involves a different process. With each book, I have a different relationship to the writing style, the historical and literary context, and to the author as a person. This is the first time I’ve translated an entire volume by a non-living poet. Takashi Hiraide, on the other hand, took a very active part in the translation of his book, and I met with him several times to discuss the work in detail. Sometimes I would ask about a certain passage . . . he would blush a little, confess he had never told anybody this before, and then tell me some backstory behind the poem. With Sagawa, I had to dig for context in the writings of her peers, and in the whole body of work that was being published in her community at the time. And with this book, more than any other, I consulted with other translators on difficult passages—sometimes in the form of very interesting and involved Facebook threads, where I asked certain people to chime in with their interpretations.

Nakayasu: I don’t know if this is news, but I see now that a lot of work—different kinds of work—has gone into my work as a translator. I’ve spent many years reading and thinking and writing and translating and living life between both the Japanese and English languages. As with playing sports, there are so many hours and hours of practice that come into play in the real game. My translations, those which get published, are grown on the dirt of many, many drafts, practice sessions, trials, mistakes, and experiences—it’s exhausting and exhilarating.