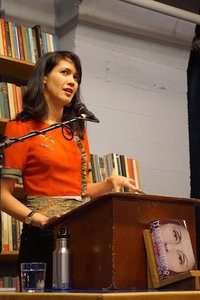 Katrina Dodson is the 2016 recipient of the PEN Translation Prize, for a book-length translation from any language into English published in 2015. The Complete Stories, by Clarice Lispector, is translated from the Portuguese and published by New Directions.

Katrina Dodson: I would never have put myself in the path of Benjamin Moser, Clarice Lispector’s biographer and the translation series editor, if not for Catherine Taylor, who suggested that I translate something by Lispector for Essay Press, which she cofounded. I was writing about Lispector in my dissertation and, being naïve about the rights situation, was sure I could find some Clarice “B-sides” for us to publish. Ben happened to be passing through Rio de Janeiro in 2012, while I was there on a Fulbright fellowship, and I got in touch with him to talk about translating Lispector. We had very similar ideas about how best to convey her idiosyncratic style in English. He saw my translations in Granta’s “Best of Young Brazilian Novelists” issue and in early 2013 asked me to do The Complete Stories. Clarice Lispector’s stories have always been my favorite, so it was the book I most wanted to translate. I was excited to show people how perversely funny she can be, and I knew I could do all those women’s voices.

Dodson: I had no idea what I was getting into. I spent two years translating 85 stories, over 600 pages. It felt like an endurance test—my editor compared it to an ultramarathon at one point. Besides the sheer volume and complexity of the stories, the biggest technical challenge was figuring out where Lispector’s language deviated from standard Portuguese and how to make it sound similarly distorted or jarring yet somehow still right in English. She has a way of bending known language constructions, but carries it off because her voice is so strong and the rhythm coheres, even when the words themselves aren’t readily coherent. The project was also emotionally demanding, because my own anxiety about doing justice to one of Brazil’s greatest writers was compounded by the intensity of inhabiting the states of crisis and revelation that mark every story.

Dodson: It was like nothing I’ve ever done. My previous translations were very short and by two young writers from São Paulo. Both of them have a playful style, and I could ask them questions and suggest ideas, so I had more freedom to experiment and even help shape the work. With Lispector, she’s no longer around to speak for herself, and her stature as a writer has become so hallowed that I felt a responsibility to be as precise as possible while also trying to match her sudden detours into mystifying language. It was a tightrope walk. The other major difference is that I was the sixth Lispector translator in this New Directions series edited by Benjamin Moser, so I had to conform to a certain overall mode, though we all have slightly varying styles. While this created further constraints, it was also enormously helpful to discuss translation dilemmas with someone who had gone over every word in the Portuguese. The rigorous editing process was crucial to this book.

Dodson: I’ve thought often about how translation requires extreme humility, to be able to recede into the shadows and let one’s style be subsumed by another’s. Translators work hard not to be noticed. Yet in taking on this endeavor of translating a woman’s voice throughout her entire writing career—nearly four decades—I realized that it also takes a tremendous ego. You have to believe you possess the authority to inhabit another person’s skin and be their mouth. You need conviction to make the voice your own, even as it remains somewhat alien to you. It took me over a year to push through my fear of making mistakes and to trust my instincts. Toward the end of Lispector’s life, her work vibrates with a new boldness, and I took that lesson into the final rounds of editing, with a stronger sense of where I wanted to go.