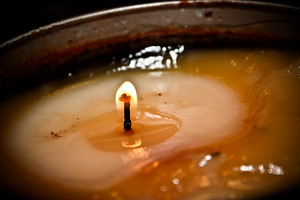 Did I go? The little girl looks at the warped photograph of herself in the toilet on the Star Ferry surveys the short hair she cut herself the image smear-dosed the girl in one word bold MISSING. Ren likes what she was wearing that day her hair that day her smile that day that day she was looking ripe fine, he says so with his eyes. Did I go? She asks Ren she can’t remember there is yellow in the toilet (miscellaneous) was it there before? The paper is wadded in her hand. It’s wet. She wipes the wall the flyer the girl qua girl: (I am here). Ren parts her dirty bottom, the girl qua girl, what’s it gonna take? She says so with her eyes: I am here.

Have You Seen Me? The mother picks a passport picture of La La thinks it looks most like her last. Cases aren’t handled the same if she can remember is La La eleven or twelve? “Twelve,” she guesses. After the report is made the school vouchers stop. But

there are things she knows: La La got on the bus. La La got to school. La La brought her boots her bag sagged heavy.

There are things she thinks: La La stood at the top of the stairs after school. La La had the sun in her eyes. La La couldn’t see the man at the bottom of the steps the man a stranger.

There are true things: La La put on her boots (thought of his boots). La La squeezed his fingers hair drenched his knuckles (thought of rambutans). La La saw the man La La liked the man (thought of Clint Eastwood).

Have You Seen Me? it asks everywhere the mother can ask it.

It is an art. The earfile tracing the pinna then the sting of peppermint swabbing the lobe. Then the earspoon, La La’s favorite. La La knows the earspoon’s not jewelry but it is the nicest jewelry they own: twenty-two carat soft Chinese gold passed-down not stolen.

The mother wipes the earspoon with oil then inserts slowly, sticking dry wax to the spoon scooping it up tapping it onto the floor where La La faces it. La La loves to face it. The puny loose pearly clumps even eggs if she breathes hard enough they hatch.

The first clump is always the most special. She can identify it even after six more clumps crowd it on the floor. She cannot identify the second or third clumps only ever the first and the last. The first is never made ordinary and the last is always contrary. It is like this with Ren, she thinks.

When the mother tells her to switch sides La La’s head-shifting shuffles shells of wax stubborn in her ear. The sound of mah-jongg tiles on cereal. A hatching sound. A sound of starting and also of finishing. La La has a way of snapping her ear down hard in an effort to evict to end true.

The next ear is the same as the first but with less flinching. In this way it is ten times as enjoyable. By the time the earspoon scoops the last egg of wax onto the floor the peppermint oil’s used-up and the spoon doesn’t glide.

Clint hands her the clump. She puts it back in her ear.

Who saw? The rest looses a hole. The mother feeds it as if to say, this is it, this is a mouth her mìng to speak it now my yùn. This is when it begins. The rest is scooped away sacred heap La La’s red plastic pail the rest so heavy the handle snaps off. As if to say, it begins when letting go. The sound of snapping. If she had a son. A sound not sounding like starting. This is the way she holds the pail now without the handle it is hard to watch La La squints her eyes. As if to say, it’s barely big enough for fucking—this hole—but it begins when fucking anyway. This is how she examines the hole to loose the rest the chance the seized chance stirred traces the rest is a chance of running. What way La La went.