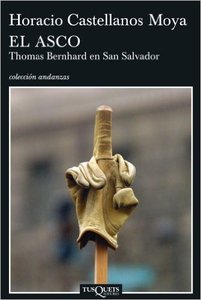 Lee Klein is the recipient of a 2015 PEN/Heim Translation Fund Grant for his translation of Horacio Castellanos Moya’s Revulsion: Thomas Bernhard in San Salvador. Read an excerpt of the translation here.

In this short novel published in Spanish in 1997, a one-paragraph rant delivered Thomas Bernhard–style that earned the author death threats, a sensitive fellow drinks two whiskeys and some mineral water as he talks to the author, Moya, at a bar in San Salvador from five to seven in the evening. Vega, the ranter, has returned to El Salvador for his mother’s funeral. He’s been in Montreal for 18 years, where he teaches art history. He’s an idealistic elitist whose sense of taste is offended by everything his homeland has to offer: its national pilsner, pupusas, beaches, newspapers, universities, monuments, military idolatry, brothels, and on and on. It’s funny that “simulators,” particularly of the artistic sort, are often derided, since the style of course is an imitation of Bernhard’s famously ranting, repetitive style.

Despite similarities to Bernhard’s masterpiece Extinction, Moya’s novel is not an exact imitation. There’s a bit more story in this than in most Bernhard, including what amounts to scenes toward the end, and more of a focus on anxiety attacks and gastrointestinal disturbance than in Bernhard’s work. No mention of suicide at all, for example. But both Moya (El Salvador) and Bernhard (Austria) pretty much flip their native countries the bird. They do so not because they’re elitist, but because they’re raging idealists, lovers of the arts and a nonexistent, perfect form of humanity. As such, at every turn they confront horrific distortions of that ideal in reality.

I first heard of El asco thanks to a brief review in Roberto Bolaño’s Between Parentheses. I had read Katherine Silver’s excellent translation of Moya’s Senselessness, so I was intrigued by this novel’s existence, especially the fact that it hadn’t been translated into English. Compared to the three other books by Moya that Bolaño had read, he deemed El asco:

“maybe the best of all, or at least the darkest, a long tirade against El Salvador that caused Castellanos Moya to receive death threats obliging him to go into exile yet again. El asco, of course, isn’t just a settling of scores or a writer’s response to a moral and political situation that he finds profoundly discouraging, it’s also a stylistic exercise, a parody of certain works by Bernhard, and the kind of book that makes you laugh out loud. Sadly, very few people in El Salvador have read Bernhard, and fewer still have a sense of humor. One’s country is no laughing matter. . . If Castellanos Moya were Bosnian or Kosovar and he had written and published this book in Bosnia or Kosovo, chances are he wouldn’t have had time to catch a plane out. Herein lies one of the book’s many virtues: nationalists can’t abide it. Its acid humor, like a Buster Keaton movie or a time bomb, threatens the hormonal stability of the idiots who, upon reading it, feel an irresistible urge to string the author up in the town square. Truly, I know of no greater honor for a real writer.”

As a big fan of Bolaño, an even bigger long-time fan of Bernhard, and a speaker and reader of Spanish for nearly a quarter century, I was compelled to track down a semi-expensive copy in Spanish and get to work. Although El Salvador is the author’s target, Revulsion is applicable to anyone who has, for example, lived through the first decade of the 21st century in the United States and had their sense of patriotism skewed by the prevalent “us versus them” nationalism of the time. It’s applicable to idealists who feel artistically and spiritually let down by their native culture.

Lee Klein‘s fiction, essays, reviews, and translations have appeared in Harper’s, The Best American Nonrequired Reading 2007, and many other sites, journals, and anthologies. A graduate of the Iowa Writers’ Workshop, he is also the author of The Shimmering Go-Between, Thanks and Sorry and Good Luck: Rejection Letters from the Eyeshot Outbox, and Incidents of Egotourism in the Temporary World. He lives in South Philadelphia.

Horacio Castellanos Moya is an El Salvadoran writer and journalist who has worked as the editor of news agencies, magazines and newspapers in various countries. As a fiction writer, he was granted residencies in a program supported by the Frankfurt International Book Fair and in the City of Asylum program in Pittsburgh. He has published ten novels, five short story collections, and a book of essays. Currently he teaches creative writing and media in the Department of Spanish and Portuguese at the University of Iowa.

Revulsion: Thomas Bernhard in San Salvador is forthcoming from New Directions in July 2016.

A Hong Kong media tycoon, known for his ardent opposition to China, was arrested on Friday over his role in a pro-democracy protest last year, the police said, dealing another blow to the city’s independent media.
https://nyti.ms/2I5RlbS

This op-ed for @washingtonpost argues that the Egyptian President's ban on mahraganat is part of a larger ban on "any cultural expression that challenge[s] its exalted image of Egypt": https://wapo.st/1f8EAMC. See PEN America's statement on the ban here: https://bit.ly/2T8TxFZ.

At the request of the Chinese government, @Shutterstock has started censoring searches by users based in China for politically volatile subjects. Employees who disagree with the blacklist on free speech grounds have been dismissed. https://nbcnews.to/3884LhZ