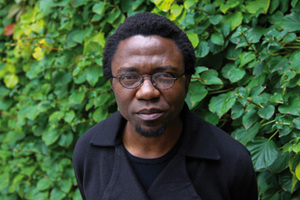 Author, poet, and professor Patrice Nganang has been one of the foremost advocates on behalf of PEN Honorary Member Enoh Meyomesse, a writer and politician who was sentenced in December 2012 to seven years in prison. (Click here to view an interactive timeline about Enoh Meyomesse or click here to send an e-letter to the government of Cameroon.) We connected with Patrice over email to find out more about his work.

1. Why is the case of Enoh Meyomesse important in Cameroon?

Every case of a human rights violation is important. The principle is simple. In a republic, every citizen is in danger when an innocent person is in prison. As for Enoh, his capture, torture, incarceration, and sentencing are an epitome of how free-thinking citizens are treated in Cameroon today. Enoh Meyomesse was a writer and a presidential candidate who was rounded up on his return from a trip abroad while his house was ransacked at the same time. He was kept in solitary confinement for a month, and then thrown in jail and sentenced to seven years in prison, without any accuser, without anybody testifying against him, without any proof of his wrongdoing, and then sentenced by a military tribunal even though he is a civilian. One has to imagine a country in which such a thing can happen while the president of Cameroon declares in Paris, in front of the international press, that there are no human rights violations in Cameroon, and claims that the country is the freest on earth. Enoh Meyomesse’s case reminds us how rotten the political system is in Cameroon and the cost of a lack of international news about the country, or about French-speaking African countries for that matter, and why people awake only when a country like Mali collapses.

2. What are the most important issues related to free expression in Cameroon?

The Cameroonian state is one of the most corrupt on earth and allows a culture of lawlessness to function. The reality in Cameroon today is the incredible power of “administrative decrees.” They are a sword of Damocles for each and every journal, news outlet, writer, journalist, and artist. Public events are governed by what is called tolerance administrative, which means that one does not need a formal authorization to organize a press conference, for instance. One needs only to declare to administrative officials that one is going to organize a press conference. And yet, those officials have the leverage to send the police to arrest everyone at the press conference with the justification that it was not authorized in the first place, since a declaration drafted by those who organized the press conference is not a commitment from officials that they have granted permission for it to take place. As you can see, it is very easy to become lost in the details of such procedures. President Paul Biya can thus claim that newspapers and TV stations are flourishing in Cameroon, but the consequence of tolerance administrative is that the police can come down on anybody at any time, and the police do so particularly when those outlets criticize Paul Biya. To survive in such an environment, both news outlets and journalists have to bribe officials. Arbitrary arrests and corruption are systemic.

3. You were called a “Vulture” who was “polluting the country” by La Météo newspaper. Tell us how the government treats human rights defenders in Cameroon.

Human rights defenders live really dangerously in Cameroon, because arbitrary arrests and corruption are systemic. Many newspapers are simply created by government officials to do their dirty work by threatening dissidents or dragging them through the mud by character assassination. La Météo is one such newspaper. It is amazing how targeting human rights defenders can have such an impact, for in a country where arbitrary arrests and corruption are the rule, society does not pull together to defend the person in danger. Most people simply run for cover. Labels such as “vulture” are merely the public expression of the death threats that human rights defenders constantly receive on the phone.

Tribunal Article 53 is a platform I created to give a certain cover to people who face personal threats because of their opinion. Fundamentally it is a public archive that collects testimonies from all the victims of the Biya regime in order to hold him accountable if he is ever chased from power. Photos and testimonies are regularly sent to me and are being archived. But the day-to-day work of Tribunal Article 53 is to encourage the creation of a culture of activism by supporting activists and encouraging citizen journalists, which is truly rare in a country like Cameroon, and in Africa in general. We have thus created an award for journalism against impunity in Africa, with a jury made of professional journalists, half of whom work in Cameroon in some of the most respected news outlets in the country. The award is named after Bibi Ngota, a journalist who was arrested while researching a scandal that involved the current justice minister of Cameroon and died in prison. We also build networks of support on the ground around writers or activists who have been incarcerated, people like Enoh Meyomesse and Paul Eric Kingue, who are still in jail and who we regularly visit. We establish contacts with public intellectuals, national and international media, and institutions in order to advocate on behalf of the person who is incarcerated. In general, Tribunal Article 53 attempts to fill the void of support that is automatically created around a public person who is in danger. After all, the way those in power destroy citizenship is to isolate people of courage. By building a community around those courageous citizens, our hope is to show to every one that courage is a cherished value in any republic.

5. What can people do to help Enoh Meyomesse and other writers and musicians in the country?

People are very willing to help, I have noticed, but one of the most damning ingredients of tyranny is corruption, and most people of good will are wary of being fooled. They are afraid of sending their money somewhere without the certainty that it will effectively help those in need and instead will be used to build a house for a thuggish individual masquerading as a human rights defender, especially in a country like Cameroon, which is ranked amongst the poorest on earth. This fear is a real concern, and a concern I truly understand. Institutional and moral guarantees are important in this respect, and in a country in which the social fabric is torpedoed by arbitrary rule, trust in institutions and morals are the most difficult things to rebuild. This is the reason why I created Tribunal Article 53, to establish a network of people of trust that can reach somebody in danger. This just happened recently with the capture and disappearance of the young filmmaker Richard Djimeli, who made a fictional film describing the last days in power of a dictator, a bold act when Cameroon is a country where the dictator is living though his last days in power in reality.

Patrice Nganang is an Associate Professor of Cultural Analysis and Theory at SUNY Stonybrook. Born and raised in Cameroon, he received his M.A. in German and the Science of Education at the University of Yaoundé, and continued his studies at the University of Frankfurt/Main, Germany, where he obtained a PhD in 1998 with a thesis on Bertold Brecht and Wole Soyinka. He is the author of five novels, two novellas, two books of poetry, and four books of essays.