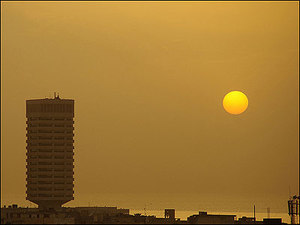 There was confusion at first; rumors of embezzlement had surfaced. How embezzlement could be possible from the position of machine operator I’ll never know. Then the truth emerged. After fifteen years of being a machine operator in the packing department of a pasta factory, Baba decided to take his book with him one day and read from it to his fellow factory workers . . . the book I had rescued from the fire. Mother was furious.

“How could he have done such a thing?” she said over the telephone. “Has your father forgotten what kind of country we live in? And where did he find this book? Didn’t we burn it?”

I knew it was best to say nothing, but the temptation to inform our eavesdropper was too great. “I saved it,” I said. After a vacuous silence she yelled, like a child pleading, “Why? Slooma, why?” and I, fully aware that the telephone line was tapped, that what we were having was a three-way conversation with the third party silent, said, “It’s my book, I am to blame, Baba never believed in such ideas,” knowing that such words rescue no one but only implicate.”

—from In the Country of Men by Hisham Matar

In April of 2011, a visit with a close friend sparked the same question that was asked each time we were together: What are you working on now? I had just been assigned by Random House to write the guide for Salman Rushdie’sLuka and the Fire of Life (a brother story to the author’s 1990 children’s novelHaroun and the Sea of Stories) and, though we discussed my projects regularly, on this occasion instead of an affirmative nod and a discussion of related subjects, he responded with a rare expletive. He had placed Rushdie as the author of The Satanic Verses, a book which inspired the Ayatollah Khomeini to issue a fatwa calling for Rushdie’s assassination, and though I felt no imminent danger in undertaking this task and was, in fact, quite excited to do it, his response—notably uncensored—was effective in communicating his belief that this might be dangerous.

I think often of his reaction.

Though I spent only a moment considering whether a more restrained response could have had the same impact that this uncensored response had upon me (I know for certain it would not), the startling singularity of his reaction caused me to think more deeply about what was exceptional about this project. Writing about controversial, censored, and banned books was not new to me. In fact, a review of my work reveals that I have written regularly—almost exclusively—about controversial, censored, and/or banned works. Before Rushdie, it was Maya Angelou’s I Know Why the Caged Bird Sings, Kurt Vonnegut’s Slaughterhouse-Five, Mark Twain’s The Adventures of Huckleberry Finn, and the works of Tennessee Williams (which in the course of being “adapted” for film had been edited so that any references to homosexuality were eradicated). After Rushdie, I was invited by Houghton Mifflin Harcourt to write a short guide for the Dalai Lama’s Beyond Religionand a project with Harold Bloom’s literary series called for an exploration of Arthur Miller’s The Crucible. In other words, the overwhelming majority of works I had written about had been censored or banned. Furthermore, if there remained any doubt whether “banned books” and “censorship” were terms that could be relegated to another time and place, an essay by Ha Jin (who had left his home in China for a chance to write without censorship) printed alongside mine in a collection of essays on Steinbeck’s The Grapes of Wrath and an assignment writing about Hisham Matar’s In the Country of Men(a contemporary novel inspired by the disappearance in Egypt of the author’s Libyan father, considered to be a dissident) reminded me that they could not. With Rushdie, who has just recently published a memoir detailing his life under the fatwa, there has been a lingering threat so public—or  publicized—that it is clear even to those with the sparest of literary preoccupations that one’s words or association with the words of others can speed one’s extinction. I had, in fact, received the assignment to write about Luka shortly after an op-ed by Salman Rushdie entitled “Dangerous Arts” had run in The New York Times. And although Rushdie’s editor gently insisted that we remain faithful to Luka as a children’s tale, early drafts show that I could not resist talking about danger. “Art can be dangerous,” Rushdie had said (“Dangerous Arts”). But to whom do words truly present a danger? Not to the artist and those who associate with him or her; it is not the words that cause them peril, but rather those the words reveal as frauds and fakes—those who wish to deny the words—who present a threat, inconvenienced with truths where they would prefer silence.

Those who wish to censor and ban would prefer that we believe that these works are written by and belong to a minority, a small group of rebels and outliers. But forces to be reckoned with are often categorized as minority by their enemies and opponents—a myth used as a weapon to diminish, to extinguish power. The same might be said for concepts of the foreign. If a myth of the foreign could be created—a sense that censorship is something that only happens elsewhere, is something other and, therefore, not our concern—such literature would be rendered impotent.  Could it be true that the same myths of the other, of the foreign, of minority, of separateness that began all wars are the same myths used as weapons in the war on words?

Yet, we know that the world is one place, its people a majority. And the works noted herein—appearing in the Middle East, in India and Libya, China and Tibet, in the United States and elsewhere—confirm a stunning uniformity of human feeling. To whom might this present a danger?

In late October of 2011, I asked Hisham Matar in an “Ask the Author Live” chat hosted by The New Yorker what could be accomplished through the dialogue between writers and readers of contemporary fiction. “Literature (particularly the novel, I would argue) has a responsibility to represent social and historical processes,” he said. “It needs to show us how we came here, and how we live. ‘How to live?’ seems to me to be what all great novels ask.…[L]iterature also exists in an atmosphere of constant rebellion. It refuse[s] to be wielded, you see, to be ‘used’. It will always disagree.” Though writing may be an act of rebellion, it is one which counts its rebels as a majority. Literature speaks up, shows us what we have done, where we have failed, how we might do better—shows us, as Matar says, “how to live.” These are not—cannot be—the concerns of a minority. And, therefore, to the dismay of those who prefer tyranny, ignorance, and injustice, literature will only grow larger.