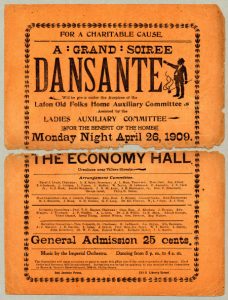 In the 1950s, my father discovered a mountain of old journals on the back of a dump truck. They had been sitting outside for hours and had gotten soaked in New Orleans’s daily, tropical rain. He brought 24 of the books home, dried them on the porch and the living room table. Then, he stored the journals in a closet because they were “very important.” They sat for the next 40 years without being opened.

Looking for a new book project one day, I began reading the journals. Scrawled on a page, glued to the inside cover of the first book, were the words: “Déclaration, Janvier 1836 …” Translated into English, the writing continued, “Considering all the advantages and the benefits that are repaid to a group of men joined together in Society, in order to put into practice good morals to mitigate and relieve human suffering, we have committed ourselves to persevere and to put all our efforts into instituting a society upon a solid and strong foundation, being composed of men distinguished by their private lives, noble sentiments and virtues.”

On the surface, the journals marked the founding of the Société d’Economie et d’Assistance Mutuelle, later known as the Economy Society, the proprietor of an early jazz venue in Trémé called the Economy Hall.

But I recognized the family names of the signatories—the same as my classmates and neighbors in once-segregated New Orleans—and realized that this written declaration of communal loyalty meant so much more.

The Economie was a secret club of Battle of New Orleans’s veterans, Haitian immigrants, traders, and businessmen—all free men of African descent—who joined together at a critical time in the history of America, only three decades past French colonial rule when the fear of slave uprisings and of an increasing population of color prompted many new, restrictive laws.

One of the new rules said that the authors of any material which might cause slaves or free people to think seriously about their oppression were subject to imprisonment or death.

The response of the Economie’s literate, wealthy blacks was not to become silent, but to couch their true sentiments in a metaphoric, context-driven language.

Writers may not think of translation with regard to the African American experience. But the diversity of black culture in theUnited Statesoffers several lessons. First, not everyone speaks or writes in English. Second, the texts of a culture under siege will rarely impart a simple, literal meaning.

The Economie, an enclave of “anciennes”—as the native families of Louisiana were called—spent the better part of the 19th century refuting the racist, mainstream definitions of their community.

After the United States purchased Louisiana and required the term “homme de coulour libre” or “femme de coulour libre” on every record—from births to property transactions—to identify a free man or woman of color, it re-defined the position of the natives of African descent. They had written in 1804 to the governor and identified themselves as “the free citizens ofLouisiana,” meaning they expected equality with the Americans without regard to race.

But they didn’t get it.

So in 1836, when the Economie members listed the organization’s goals—“to help one another, (and) teach one another while holding out a protective hand to suffering humanity”—the ambiguity of the language kept them within legal boundaries at a time when the government outlawed most of Louisiana’s people of African descent from becoming literate, participating in banking, and forming corporations—in effect, removing these people from the fortunes to be made in booming 19th century New Orleans, a major entryway into the interior to the United States with a port second only to New York.

The Economists, however, may have had even larger ambitions “to help” and “to teach” all of the people of African descent in the city—in total about 43,000 people or 41 percent of the city’s population. The organization’s first president said at his inaugural speech: “We find our hearts full of all the ardor necessary to conquer the obstacles which chain our efforts from narrow limits or paralysis because of the lack of aptitude necessary for our development.”

“Enchainer,” for example, meaning chain or shackle, is a figure of speech not to be taken lightly in an environment of slave ownership.

Over the next century, some Economie members moved to Europe, Haiti, and Mexico in response to continued government repression. Most of the members, however, remained in a small circle of intimates, keeping their history and their records to themselves.

Their jazz hall became famous—over one hundred oral histories of musicians in the area mention the Economy Hall. But no one knew the history of the French society that supported the culture.

Because the journals of a “Negro” organization had no cachet in segregated New Orleans where my family lived in the 1950s, the books were assumed to have no material or intellectual value. But they were priceless to my father as he studied at the University of Ottawa, driving across the United States every summer to speak and study in French, and to become educated outside of an environment drenched with racial stereotypes. The written French of the Economie is unlocking for me as a writer the semantics of an American culture known only on the surface, a community largely unrecorded by historians and a new path of the African diaspora.