Writing Our Way Out: Reflections on Inheritance 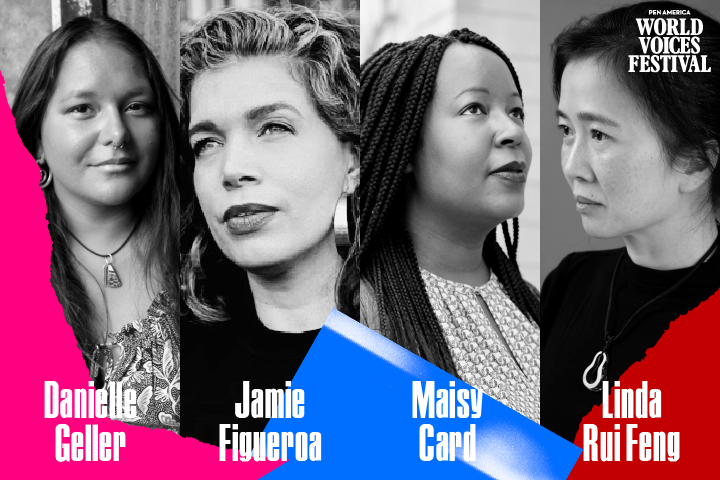 Debut authors Danielle Geller, Jamie Figueroa, and Linda Rui Feng entangle readers in family histories that reveal many rifts and contradictions central to the country’s past and present. Boldly adding their voices to our public conversations with their shrewd works, they offer staunchly original perspectives on loss, inheritance, and the social contexts that often catalyze or seep into grief. At the PEN World Voices Festival, they discuss their writing that reckons with the grief we inherit, and puts us back in touch with ancestors we were afraid we’d lost.

A mix of archival research and personal memoir, Geller’s “eye-opening, moving” (Kirkus Reviews) Dog Flowers presents herself and her mother on a parallel journey toward redemption as two Navajo women healing from the scourges of poverty and alcoholism. Also set in the wake of a mother’s passing, Figueroa’s “beautifully crafted, poetic” (The New York Times) novel, Brother, Sister, Mother, Explorer, follows a surviving daughter as she gambles to convince her brother that life is worth living despite the indignities they have inherited. In Feng’s Swimming to Trout River, “a striking debut novel” that “resonates from page one” (Publishers Weekly), a married couple struggles to reckon with violent memories of China’s Cultural Revolution, as they make moves to reunite with the daughter they left behind and start anew. This event will be moderated by Maisy Card, whose widely-lauded novel, These Ghosts Are Family, debuted in 2020.

This digital event will start at 2pm ET / 11am PT. If you have any questions, please visit our FAQs.

Danielle Geller’s first book, Dog Flowers, was published by One World/Random House in 2021. She received her MFA in creative writing in nonfiction at the University of Arizona, and the Rona Jaffe Foundation Writers’ Award in 2016. Her work has appeared in The Paris Review’s “The Daily,” The New Yorker, and Brevity. She lives with her husband and two cats in British Columbia, where she teaches creative writing at the University of Victoria. She is also a faculty mentor for the low-residency MFA program at the Institute of American Indian Arts. She is an enrolled member of the Navajo Nation.

Jamie Figueroa is Boricua (Afro-Taíno) by way of Ohio and a longtime resident of northern New Mexico. Her writing has appeared in AGNI, ELLE, Emergence Magazine, McSweeney’s, and American Short Fiction, among other journals. She received her MFA in creative writing from the Institute of American Indian Arts, where she is now an assistant professor. Brother, Sister, Mother, Explorer (Catapult) is her debut novel.

Linda Rui Feng was born in Shanghai and has lived in San Francisco, New York, and Toronto. She is a graduate of Harvard University and Columbia University and is currently a professor of Chinese cultural history at the University of Toronto. She has been twice awarded a MacDowell Fellowship for her fiction, and her prose and poetry have appeared in journals such as The Fiddlehead, Kenyon Review, Santa Monica Review, and Washington Square Review. Swimming Back to Trout River is her first novel.

Maisy Card is the author of These Ghosts Are Family, the fiction category winner for 2021 OCM Bocas Prize for Caribbean Literature and finalist for several awards, including the PEN/Hemingway Award for Debut Novel and the Los Angeles Times’s Art Seidenbaum Award for First Fiction. Her writing has appeared in The Paris Review’s “The Daily,” Literary Hub, The New York Times, Guernica, and other publications. She was born in St. Catherine, Jamaica, but was raised in Queens, NY. Card is currently an instructor at the Sackett Street Writers’ Workshop and a fiction editor at The Brooklyn Rail.