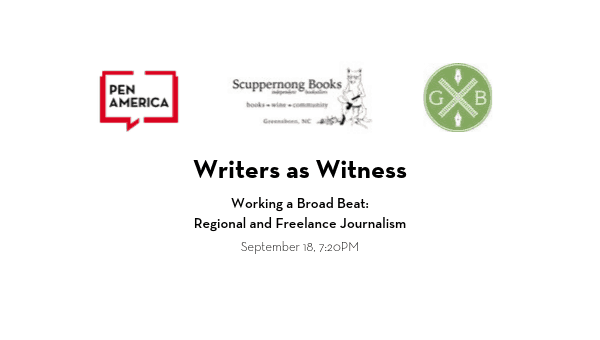 Increasingly, journalism is populated by freelancers: reporters who pitch stories to newspapers, magazines, and digital outlets around the country. At the same time, state-wide and regional outlets appear as local newspapers shut down. What is it like to work a broad beat? How does it change the way you approach the work? How do freelance and regional journalists choose and find their stories? How do they sell them? What keeps them going?

In this discussion, PEN America has collaborated with Scuppernong Books and Greensboro Bound to bring three North Carolina based journalists talk about the challenges of freelance and regional reporting and the major issues they see on the horizon for journalism in America.

Joe Killian, Investigative Reporter, NC Policy Watch
Joe Killian’s work takes a closer look at government, politics and policy in North Carolina and their impact on the lives of everyday people. Before joining NC Policy Watch, Joe spent a decade at the News and Record in Greensboro.

Barry Yeoman, Freelance Investigative Reporter
Barry Yeoman specializes in in-depth reporting that puts a human face on complex issues. He’s been honored by the Columbia Journalism Review as one of “the best unsung investigative journalists working in print in the United States.” He’s been a contributor to Mother Jones, The New Republic, Talking Points Memo, and the Washington Post.

Isaac Bailey, Freelance Reporter
Isaac Bailey is a 2014 Nieman Fellow, former columnist and senior writer for The Sun News in Myrtle Beach, SC and the author of “My Brother Moochie: Regaining Dignity in the Face of Crime, Poverty, and Racism in the American South” (Other Press). He’s been a contributor to Politico, Time, CNN.com, and The Washington Post.