[WEBINAR] Trust in the Rust Belt: Exploring Objectivity and Local Reporting in 2020

Join PEN America and First Draft for a live conversation with local Rust Belt journalists and community leaders on Thursday, October 1 at 6:30pm ET to discuss access to accurate information and community trust. We’ll explore concerns that local news reporters are facing in the lead up to the election including debates on objectivity and bias, responsible coverage of dangerous conspiracy theories and disinformation flow, the unique challenges of reporting in battleground states, and more.

We are very excited to offer an interactive component to planning this virtual panel: Though the first half of this event will be structured as a moderated panel discussion, the second half will address pre-submitted questions from community members before moving into live Q&A. We want to hear from you: What are the issues that you would like to discuss regarding information integrity and trust in the Rust Belt? What concerns you about objectivity and bias in your communities this election season? We invite you to join us in mapping out the conversation by submitting a question or conversation topic that you would like to address. You may return to submit as many times as you wish, and please note that the submission deadline will close on October 1 at 4pm ET.

This virtual conversation is free and open to the public, and is co-sponsored by the World Affairs Council of Pittsburgh, Black Girl Media, Presente!, and Eye on Ohio. 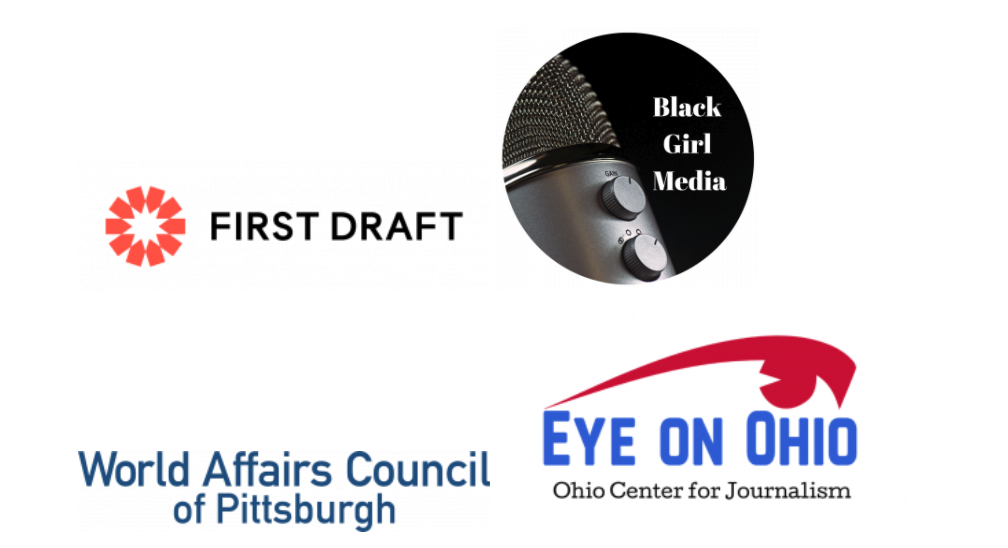 Shana Black is the founder and chief content producer for Black Girl Media, a multimedia storytelling platform for underrepresented voices. At Black Girl Media, Black produces podcasts, writes stories, and hosts community events and outreach activities. In 2019, Black’s work earned her recognition as one of Cleveland’s Most Interesting People for her work to reengage and reenergize African Americans in Cleveland. Shana is currently serving as Ohio’s Misinformation Research and Local News Fellow for First Draft.

Ron Calhoun is a retired System Analyst from The Cleveland Clinic, previously working in their Data Center. He owns two Internet and print platforms, both with hyper-local news content. The Ward 7 Observer for the last two years has covered news for residents in Asiatown, Hough, Midtown, and St. Clair-Superior communities. The newly birthed Cleveland Observer (The Cleveland Observer) provides news, resources and information for areas throughout urban neighborhoods in Cleveland, Ohio. Prior to The Cleveland Observer’s existence these communities were deemed news deserts. Their goal is to provide a clearer, more broader perspective of urban Cleveland, and their internet presence can be view at www.ward70bserver.com or www.theclevelandobserver.com.

Jess Hardin is a reporter for Mahoning Matters where she covers a little bit of everything, but has recently focused on the coronavirus pandemic in the Mahoning Valley. Most recently, she wrote for The Vindicator, covering two communities south of Youngstown. While working at The Vindicator, Jess won a grant from Cleveland-based non-profit Center for Community Solutions to research and report on the crisis of ambulance service in the Mahoning Valley. Jess grew up in the Pittsburgh area and graduated from Georgetown University.

Maria Manautou-Matos is Founder & Editor of PRESENTE Pittsburgh Latino Magazine. PRESENTE publishes culturally relevant content that celebrates, connects, and empowers 30K+ Latinxs in Western PA. The bilingual magazine has become a key resource for Latino organizations to share programs and news with the community. Pittsburgh City Paper, NextPittsburgh, TheBulletin, and other publications have featured Maria’s work. Prior to launching PRESENTE, Maria worked in marketing communications for 15+ years. Manautou-Matos holds a bachelor’s degree from Carnegie Mellon University and a master’s degree from Duquesne University. She was born and raised in Puerto Rico.

Lucy Perkins is a reporter/producer for Pittsburgh’s 90.5 WESA’s Government and Accountability team. Before joining the 90.5 WESA newsroom, Lucy was an NPR producer in Washington, D.C., working on news programs like All Things Considered and Weekend Edition. She also helped produce the Hidden Brain podcast and NPR’s 2016 election night special coverage. Lucy joined NPR as a Kroc fellow after interning with Michigan Radio. Lucy is a proud Midwesterner, from the tip of Michigan’s pinky finger.

Lucia Walinchus is an award-winning journalist, attorney and ice hockey addict. She is currently the Executive Director at Eye on Ohio, the Ohio Center for Investigative Journalism. Walinchus has written more than 500 articles for various publications throughout her career and was named a 2016 Fulbright Berlin Capital Program Scholar. She has been featured as a guest speaker on CNN and is a contracted freelancer for the New York Times. By investigating police practices throughout Oklahoma, she was able to write an exposé detailing how infrequently Oklahoma police fingerprint evidence, especially in rural areas, even if possession is an issue. For another story, she analyzed thousands of records to determine that Oklahoma City Landlords win 95 percent of contested cases. She recently teamed up with the Pulitzer Center to show how a tax loophole raises property tax rates for small business owners, and spearheaded a major investigation with the Cincinnati Enquirer that showed African American neighborhoods have far more stops than white ones. Walinchus has a degree in Journalism from American University and a Juris Doctor degree from California Western School of Law. She also teaches Data Journalism at Ohio University.

Catch up on our past events by viewing recordings linked on our program page, Knowing the News.

Don’t miss @PENAmerica’s international literary festival from May 18 - 22! The @penworldvoices Festival brings together the world’s biggest and boldest writers for conversations on the power of the written word. Tickets are on sale now: https://buff.ly/2Qe0VBc. #PENWorldVoices