The Ties that Bind: Weathering Crises in a Globalized World 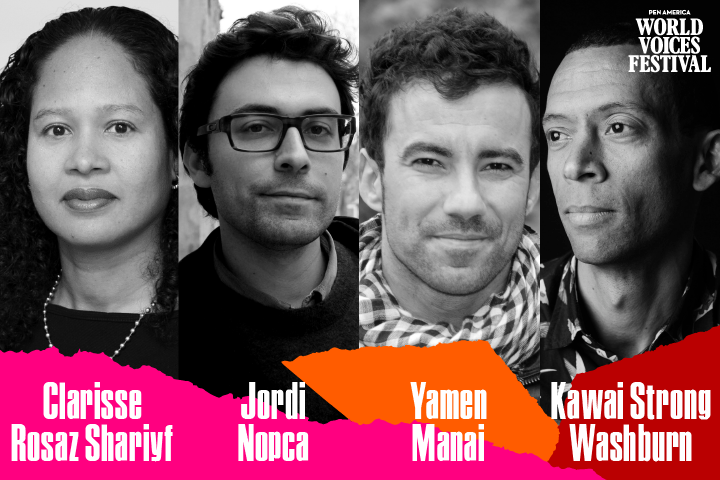 Yamen Manai, Jordi Nopca, and Kawai Strong Washburn‘s latest works of fiction follow characters experiencing the aftershocks of events initiated by external forces, pushing their lives to the precipice of great change. In these novels, collisions between contemporary culture and time-worn tradition can lead to disaster—whether ecological, economic, or even divine in nature.

In Manai’s The Ardent Swarm, an “elegant allegory of globalization’s insidious nature [that] finds rich drama in the tense, turbulent reckoning with questions of modernity versus tradition” (Publishers Weekly), a North African beekeeper leaves isolation to seek answers in a strange city, only to be catapulted into the throes of the Arab Spring. A Catalonian author, Nopca writes in his “heartbreaking and hilarious, tender and violent” (The New York Times) debut short story collection Come on Up about the divided city of Barcelona, where a disillusioned generation grappling with an economic crisis moves toward secession, in the wake of underemployment and austerity. In Washburn’s Sharks in the Time of Saviors, a family is pushed to reflect on their heritage and the demands of survival after divine intervention wrecks the sugarcane industry where they have labored for generations in Hawai’i. In this “singular debut novel,” Washburn “proves himself an old hand at dissecting the ways in which places—our connections to them, our disconnections from them—break us and remake us” (The New York Times). The authors join in a discussion of their works and the unprecedented conflicts that can arise even in our globalized, hyper-connected world. PEN America senior director of literary programs Clarisse Rosaz Shariyf moderates.

Presented in collaboration with Brazos Bookstore and Institut Ramon Llull.

Yamen Manai was born in 1980 in Tunis and currently lives in Paris. Both a writer and an engineer, he explores the intersections of past, present, tradition, and technology, in his prose. In The Ardent Swarm (originally published as L’Amas ardent), his first book to be translated into English, he celebrates Tunisia’s rich oral culture, a tradition abounding in wry, often fatalistic humor. He has published three novels with the Tunisia-based Éditions Elyzad—a deliberate choice to ensure that his books are accessible to Tunisian readers: La marche de l’incertitude (2010), awarded Tunisia’s prestigious Prix Comar d’Or; La sérénade d’Ibrahim Santos (2011); and L’Amas ardent (2017), which earned both the Prix Comar d’Or and the Prix des Cinq Continents, a literary prize recognizing exceptional Francophone literature.

Jordi Nopca is the author of two novels and the short story collection Come On Up (Bellevue Literary Press). Named a “Young Catalan Writer to Watch” by Culture Trip, his books have received the Proa and Documenta Prizes. Nopca is also an award-winning journalist whose work has appeared in Time Out Barcelona and Words Without Borders. Born in Barcelona in 1983, he is editor of the newspaper Ara and its literary supplement Ara Llegim. Come On Up is his first book of fiction to appear in English.

Kawai Strong Washburn was born and raised on the Hāmākua coast of the Big Island of Hawai’i. His first novel, Sharks in the Time of Saviors, won the PEN/Hemingway Award for Debut Novel and was listed as a notable/best book of the year by The New York Times; The Guardian; The Boston Globe; Amazon; O, The Oprah Magazine; Kirkus Reviews, BBC Culture, and Barnes and Noble, among others. Today, he lives with his wife and daughters in Minneapolis.

Clarisse Rosaz Shariyf is PEN America’s senior director of literary programs. She oversees curation, production, audience building, and strategy for a range of programs and initiatives honoring literary excellence, featuring American and international authors and artists. Formerly, she was the manager of public programs at the Schomburg Center for Research in Black Culture, The New York Public Library, and produced a year-round schedule of panel discussions, performances, film screening, and symposia spanning the history and culture of the global Black experience. She has held prior appointments at Justice and Sustainability Associates in Washington, D.C. and Bates College in Maine. She holds an MA in social sciences from The University of Chicago and an MA in English civilization from the University of the French West Indies.

In 1974, Karl Kilian opened Brazos Bookstore to encourage the growth and development of the emerging Houston literary scene with a clear focus on personalized service, community engagement, and passionate curation. As a hub for the most creative, intelligent, and engaged readers in Houston, the bookstore offers programs and curates their shelves to inspire and expand the horizons of their curious readers. They aim to connect all readers with the best contemporary and classic literature, nonfiction, art and architecture, and books for children.

The Institut Ramon Llull is a public body founded with the purpose of promoting Catalan language studies at universities abroad; the translation of literature and thought written in Catalan; and Catalan cultural production in other areas like theater, film, circus, dance, music, the visual arts, design and architecture.