The Myth of Innocence: Coming of Age in America 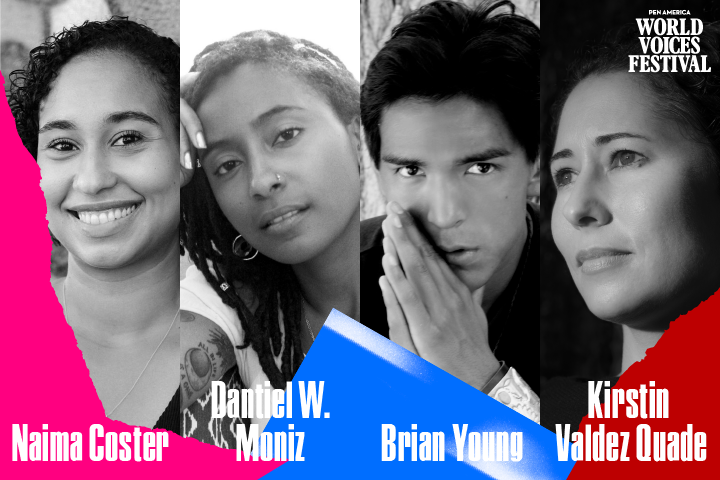 Recent works from Naima Coster, Kirstin Valdez Quade, and Dantiel W. Moniz guttingly set to the page the burdens of coming of age as a person of color in the United States—and the onerous reckonings with race, injustice, and complicated, long-silenced family histories it can entail. They join to discuss charting their protagonists’ moral and psychological growth from youth to adulthood, and pushing against the boundaries of coming-of-age tropes.

Coster’s novel, What’s Mine and Yours, “portrays her characters’ worlds with startling vitality” (The New York Times) as it examines the outrage and anxiety that ensues when a county initiative draws students from the largely Black east side of town into predominantly white high schools on the west. In Quade’s The Five Wounds, the stunning expansion of a 2009 short story The New York Times called a “legitimate masterpiece,” five generations of a New Mexican family converge after making a dramatic discovery in their family history that reveals the trauma, redemption, and sacrifices of parenthood. Milk Blood Heat, Moniz’s “electrifying” debut short story collection whose “exhilarating and shocking and even healing” powers rest in its “veracity, vitality, and vulnerability” (The Washington Post) captures the lives of ordinary Floridians at the cusp of life’s inflection points as they confront waves of intense revelations that cross generations from young girls to grown men. Moderated by Brian Young, whose searing young adult debut novel about a courageous Navajo boy, Healer of the Water Monster, comes out this May.

The digital event will start at 1pm ET / 10am PT. If you have any questions, please visit our FAQs.

Presented in collaboration with Scuppernong Books.

Naima Coster is the author of two novels, What’s Mine and Yours, which is a Read with Jenna pick for March 2021, and her debut, Halsey Street, which was a finalist for the 2018 Kirkus Prize for Fiction. In 2020, she received the National Book Foundation’s “5 Under 35” honor. Coster’s stories and essays have appeared in The New York Times, Kweli, The Paris Review’s “The Daily,” The Cut, Catapult, The Rumpus, and elsewhere. She has taught writing for over a decade in community settings, youth programs, and universities. She lives in Brooklyn with her family.

Dantiel W. Moniz is the recipient of the Alice Hoffman Prize for Fiction, Key West Literary Seminar’s Cecelia Joyce Johnson Award for emerging writers, and a Tin House Scholarship. Her debut collection, Milk Blood Heat, is a selection on the Indie Next List, an Amazon “Best Book of the Month” selection, a pick on Roxane Gay’s Audacious Book Club, as well as a Belletrist book club pick, and has been hailed as “must-read” by TIME; Entertainment Weekly; BuzzFeed; ELLE; and O, The Oprah Magazine; among others. Her work has appeared in The Paris Review, Harper’s Bazaar, Tin House, One Story, American Short Fiction, Ploughshares, The Yale Review, Timothy McSweeney’s Quarterly Concern, and elsewhere. She lives in Northeast Florida and currently teaches fiction at the University of Wisconsin–Madison.

Brian Young is an author and filmmaker. He graduated from Yale University with a bachelor’s in film studies and Columbia University with a master’s in creative writing. An enrolled member of the Navajo Nation, he grew up on the Navajo reservation but now lives in Brooklyn, NY. As an undergraduate, Young won a fellowship with the prestigious Sundance Institute with one of his feature-length scripts. He has worked on several short films, including Tsídii Nááts’íílid – Rainbow Bird and A Conversation on Race with Native Americans for the short documentary series produced by The New York Times. Young is currently working on his two books with Heartdrum, an imprint of HarperCollins. In addition to pursuing film and writing, he also works as a personal trainer, both online and in person.

Kirstin Valdez Quade is the author of The Five Wounds and Night at the Fiestas, winner of the National Book Critics Circle’s John Leonard Prize. She received the National Book Foundation’s “5 Under 35” honor, the Rome Prize, a Stegner Fellowship, and the Rona Jaffe Foundation Writers’ Award. Her work has appeared in The New Yorker, The New York Times, The Best American Short Stories, The O. Henry Prize Stories, and elsewhere. She is an assistant professor at Princeton University.

Scuppernong Books is a general interest/literary bookstore and cafe in Greensboro, NC. The store opened on December 21, 2013 and has been an essential part of the rebirth of downtown Greensboro ever since. Additionally, Scuppernong Books hosts hundreds of events a year, bringing in writers from around the world, the country, and the state.

In 2017, Scuppernong Books was instrumental in the formation of the Greensboro Literary Organization, a separate nonprofit organization that stages the annual Greensboro Bound literary festival and brings authors into Guilford County Schools through its Authors Engaging Students program.