The Border: Epicenter of Our Homelands 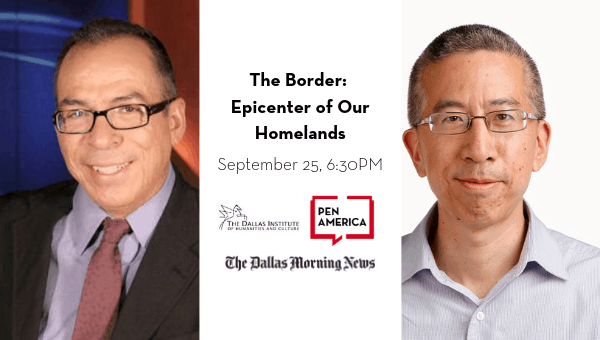 This spring, PEN America alongside The Dallas Morning News and The Dallas Institute presented a program on “Boundaries and Borders” from the perspectives of Language, Art, and the City. This fall we return to the still-timely subject for an in-depth look at actual life on the Mexico-U.S. border from a career journalist who calls the border “home.”

Join us for a conversation between acclaimed author and journalist Alfredo Corchado and Tom Huang from The Dallas Morning News on the epicenter of our homelands, the border. According to Corchado, the border is not just a geographical place, but a mindset. For millions it’s a dynamic, vibrant place surrounded by some of the safest communities anywhere; however, it’s also a place of contention for politicians. Whether from the standpoint of demographics or economic integration, the border is a peek into the future. Corchado will also be signing his latest book, Homelands: Four Friends, Two Countries, and the Fate of the Great Mexican-American Migration, just released in Spanish and English paperback versions.

Do note that the reception portion of the event will begin at 6pm followed by the evening’s program. To purchase tickets, please click here.

PEN America Members can attend this event for free by entering the promo code PENAMERICA at check out.

Alfredo Corchado is the México Border correspondent for The Dallas Morning News. He is a Nieman, Lannan, USMEX, Woodrow Wilson, and Rockefeller fellow and the winner of the Maria Moors Cabot and Elijah Parish Lovejoy Awards for Courage in Journalism. Corchado lives in Mexico City but calls the border home. He is the author of Midnight in Mexico and Homelands.