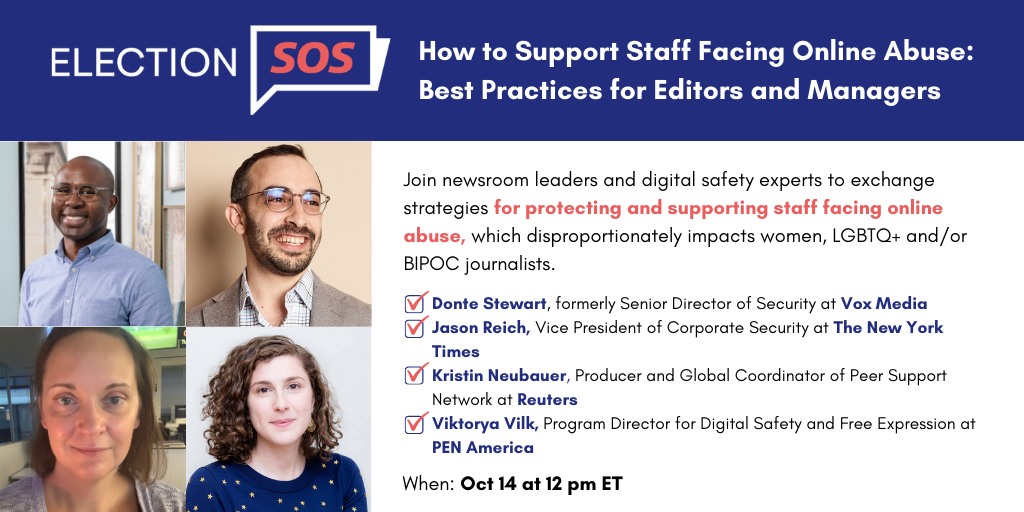 If you’re an editor or newsroom leader, chances are you have staff who are routinely subjected to hate and harassment online. Because women, BIPOC, and members of the LGBTQIA+ community are disproportionately targeted, online abuse directly undermines efforts to create a more equitable and inclusive work environment. Co-hosted by PEN America and  Hearken, join newsrooms leaders from Vox, Reuters, and The New York Times to exchange ideas and learn concrete strategies for how to better protect and support staff in preparing for, responding to, and mitigating the damage of online abuse.

Jason Reich is the vice president of corporate security for The New York Times Company. He is responsible for the development and enforcement of all safety and security plans for domestic employees and facilities while serving as the company’s internal expert on all security matters. He joined Times in 2019 from BuzzFeed, Inc. where he served as director of global security for four years. Prior to BuzzFeed, Jason was the founder and managing director of the Collective Security Project, a team of crisis response experts based in the United Kingdom, Turkey, and the United States, who were contracted to protect journalists and aid workers and NGOs in challenging environments. Reich is a board member at the ACOS Alliance.

Donte Stewart serves as the lead for Starbucks Corp.’s travel intelligence and safety program. He recently completed a stint as Vox Media’s first-ever, full-time security leader, overseeing the company’s security and anti-harassment efforts. Stewart brings 10+ years of industry experience across corporate security, intelligence analysis, and political analysis, having also served as a member of the Bill and Melinda Gates Foundation’s global security team, and prior to that, as an intelligence officer at the Central Intelligence Agency.

Viktorya Vilk is the program director for digital safety and free expression at PEN America, where she leads initiatives on a range of free expression issues, including developing tools and strategies to empower journalists and newsrooms to defend against online abuse. She has over a decade of experience working in nonprofits to expand access to the arts and defend creative and press freedom.

Other Events in the Online Abuse Defense Series